Once tipped to be the next Prime Minister, could Amber Rudd now team up with Tory Brexit rebels

She was being tipped as the next Prime Minister, but Amber Rudd’s political career was in tatters last night after she was forced to resign as Home Secretary.

The prominent Remain supporter – the fourth Cabinet minister to fall on a sword in six months – had been seen as Theresa May’s protege after the Prime Minister anointed her as her successor at the Home Office.

Now there is a risk she could team up with Tory Brexit rebels, including Nicky Morgan and Anna Soubry, on the backbenches and become a thorn in the side of the woman who did so much to shape her career.

Miss Rudd’s time in Government almost came to an abrupt halt last June when she was only 346 votes away from losing her seat in Hastings and Rye. 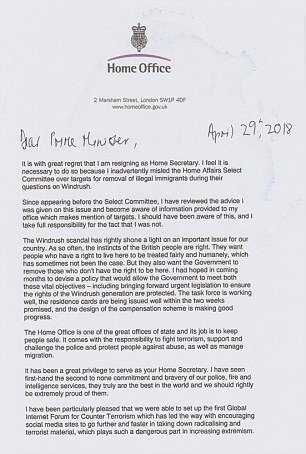 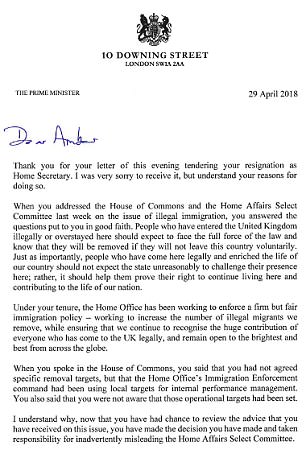 In her resignation letter, Ms Rudd admitted she ‘should have been aware’ the targets existed. Mrs May said she was ‘sorry’ to accept the resignation

But she quickly brushed off the setback and Tory MPs opposed to Brexit were soon lining her up as their favoured candidate if the post of party leader became vacant.

Earlier this year it emerged Miss Rudd, 54, had enlisted the help of the stylist who dressed Samantha Cameron to craft her image, which was interpreted as a sign she had her eyes on the top job.

She also hired CTF Partners, the company co-founded by the Tories’ election guru Sir Lynton Crosby, to help with local campaigning to boost her standing in her ultra-marginal constituency.

Since last June’s election, she has amassed a war chest of £23,500, which friends insisted was intended for use in her seat rather than on a potential leadership bid.

Miss Rudd, who was first elected in 2010, was ubiquitous during last year’s election campaign as one of the few Cabinet ministers trusted by Mrs May and her closest aides.

She won plaudits after standing in for the Prime Minister in the BBC’s election debate just three days after the death of her father.

‘Theresa May is not here but I hope to make a good fist of setting out Conservative Party policy,’ she told the television audience.

An analysis of newspaper coverage in the final three weeks of the campaign found that Miss Rudd was mentioned in more newspaper stories than any other Cabinet member, except for Mrs May.

The former ‘aristocracy co-ordinator’ on the movie, Four Weddings and a Funeral, came to politics later than most – after university, marriage and children.

She said in 2013: ‘I decided to take my life back. In my 20s, I was leaving university, getting married or having a baby. And then, in my 30s, I was just keeping my head above water. 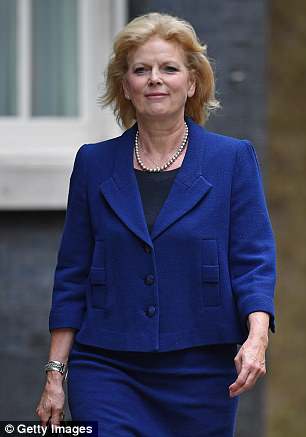 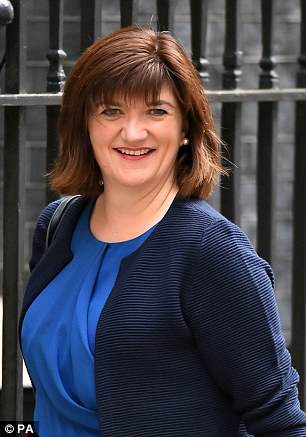 Now there is a risk she could team up with Tory Brexit rebels, including Nicky Morgan and Anna Soubry, on the backbenches and become a thorn in the side of the woman who did so much to shape her career

‘When I hit 40, I thought I have got to get a grip of my life and really point it in the direction I want it to go rather than just swim hard against the current.’ She attended Cheltenham Ladies’ College and the University of Edinburgh, where she read history, before embarking on a career in finance at J P Morgan. After entering Parliament, she served as George Osborne’s parliamentary private secretary, before being promoted to the whips’ office and then appointed a junior minister in the Energy Department in 2014.

After the 2015 election, her fast ascent continued with promotion to energy secretary before she was appointed Home Secretary by Mrs May.

A renowned straight talker, Miss Rudd got into trouble after describing her constituency as ‘depressing’.

She also infamously went for fellow Tory minister Boris Johnson during the EU referendum debate, declaring: ‘Boris is the life and soul of the party, but he is not the man you want driving you home at the end of the evening.’

She also suffered the loss of her ex-husband, Sunday Times journalist AA Gill, from cancer in December 2016.

They were married for five years in the 1990s and had two children.