Nature at its most cruel: One-day-old giraffe is killed and eaten in front of its mother after it tried and failed to fight off a lioness

This is the heartbreaking moment a one-day-old giraffe cub was hunted down and eaten by a lioness in front of its mother after she failed to fight off the predator.

Pictures of the life-and-death struggle, which took place in Kenya’s Masai Mara National Reserve, show how the mother giraffe failed to spot the lioness until it was too late.

Having taken down the baby giraffe, the lioness dragged the body away to eat in order to make milk for her own young cubs, which had been left somewhere nearby. 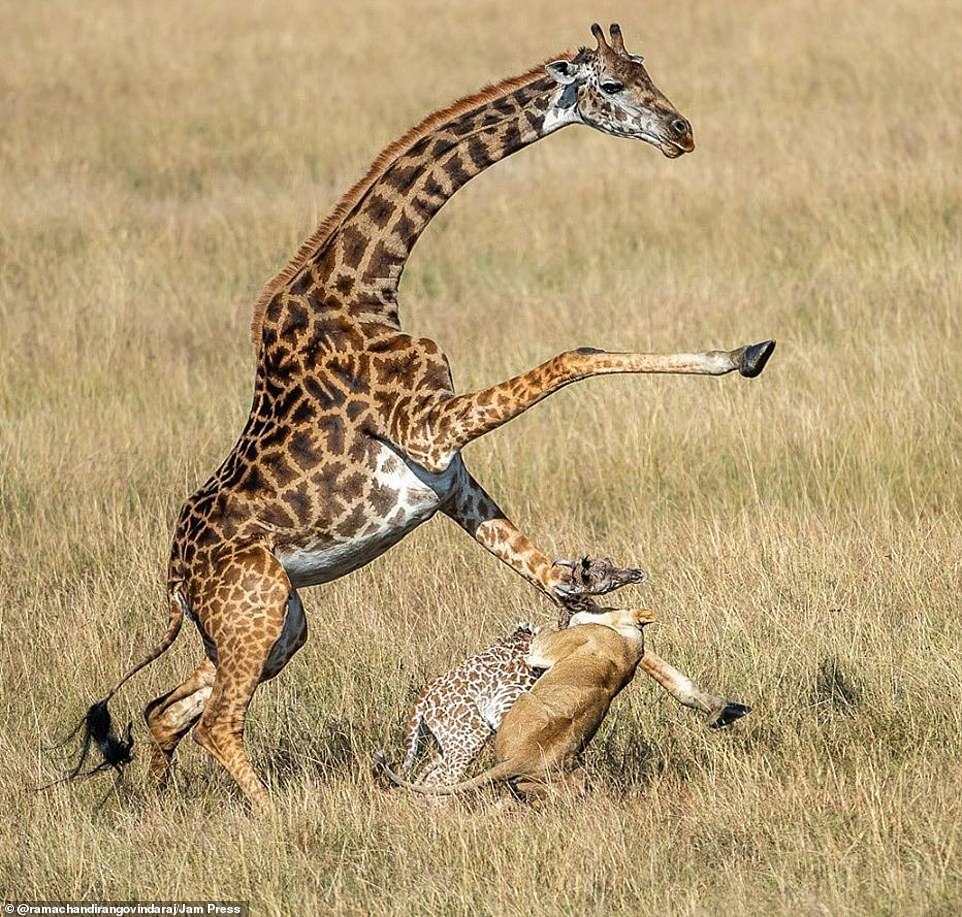 The mother ran to her baby’s defence, delivering a powerful kick to its head, but it was too late to stop the lioness from breaking the infant’s neck, killing it

Photographer Ramachandiran Govindaraj, who captured the images, said he was left with ‘mixed feelings’ after witnessing the spectacle – which took place in September 2018.

Asked whether he thought about trying to help the giraffe himself, he said: ‘Photography is not about interfering with nature, things go how things go and whilst it is sad, we should also respect the ecosystem.’

Mr Govindaraj revealed that, shortly before the lioness attacked, the giraffe and her cub had been stalked by a hungry hyena which had followed them for 30 minutes before eventually giving up.

The mother then led her cub deep into the savanna, and unwittingly into the clutches of the lioness.

‘A giraffe’s neck allows it to keep an eye out for predators, but babies are incapable of this,’ Govindaraj explained. ‘Sadly, the mum also didn’t spot the big cat.’ 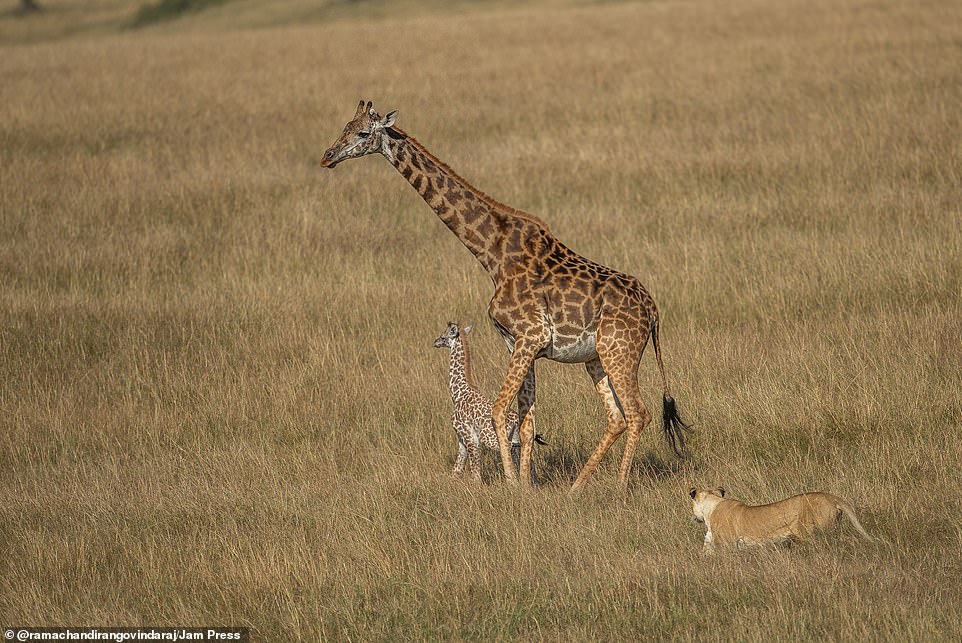 Photographer Ramachandiran Govindaraj said that adult giraffes typically use their long necks in order to spot predators before they can pounce, but in this case the mother did not see the lioness until it was too late 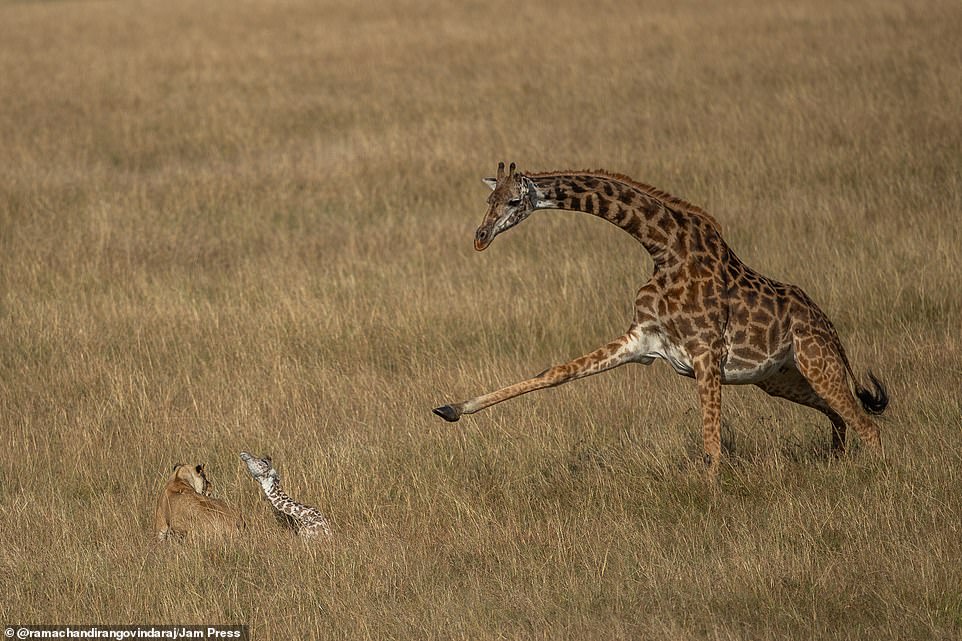 Park rangers later revealed that the giraffe cub was just one day old, but the lioness – aged between five and seven – was also thought to have cubs somewhere nearby 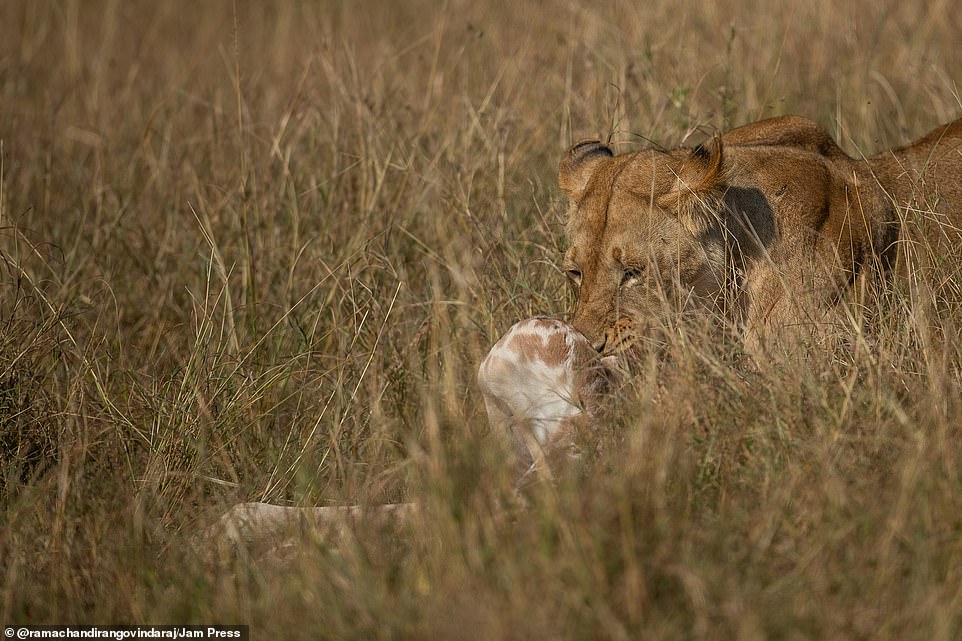 After taking down the young giraffe the lioness dragged its body away to eat, which was watched by the mother who refused to leave until the grisly spectacle was over 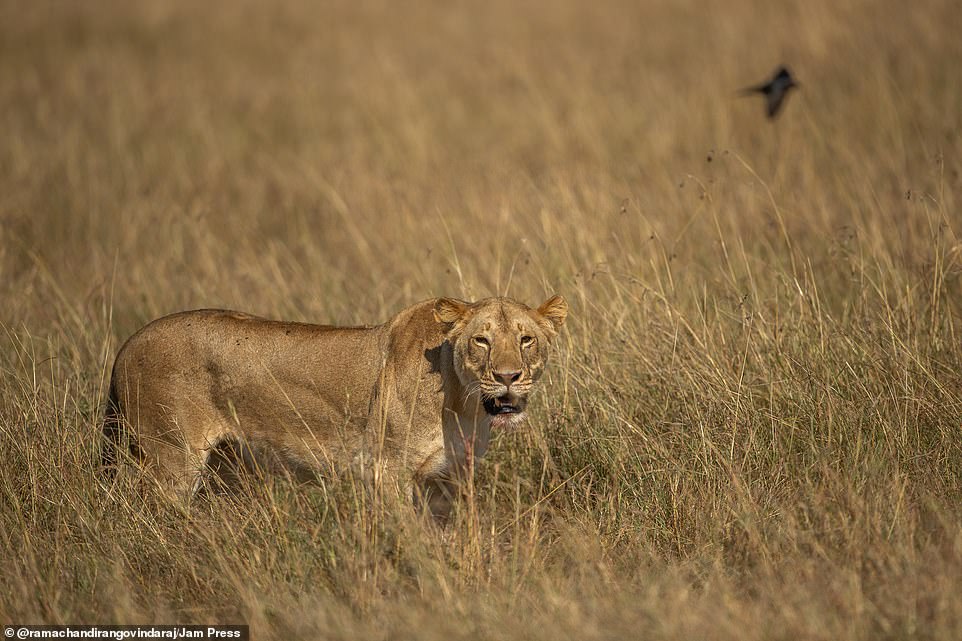 After the lioness had finished feeding Mr Govindaraj said the mother giraffe went over to see if she could do anything to revive it, but was forced to leave alone

The lioness stalked through the long grass until it was close enough to pounce, when it latched on to the baby giraffe’s neck with its teeth and claws.

The huntress then used her powerful bite to break the baby’s neck, before taking her kill away to eat.

Mr Govindaraj explained: ‘Young giraffes have a mortality rate of 50 per cent in their first six months. Once they reach adulthood, only the bravest of lions will attempt to hunt them, so this hungry lioness opted for the baby.’

He said that park rangers later revealed the calf was only one day old, but also revealed the lioness – who was between five and seven years old – was also thought to have cubs nearby.

Since posting the images on Instagram, Mr Govindaraj said they have caused a lot of strong reactions among his followers, who admired the savage beauty of nature. 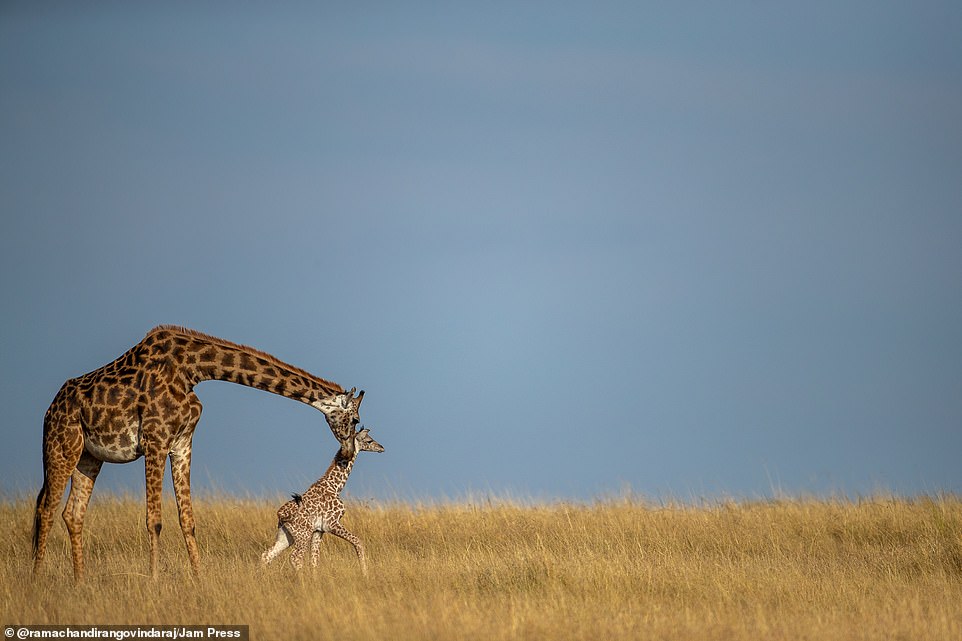 Baby giraffes are prized prey on the savanna – weighing up to 150lbs but with almost no natural defences except their mother. The mortality rate in the first six months of life is 50 per cent, but if they survive to adulthood they become very hard to kill 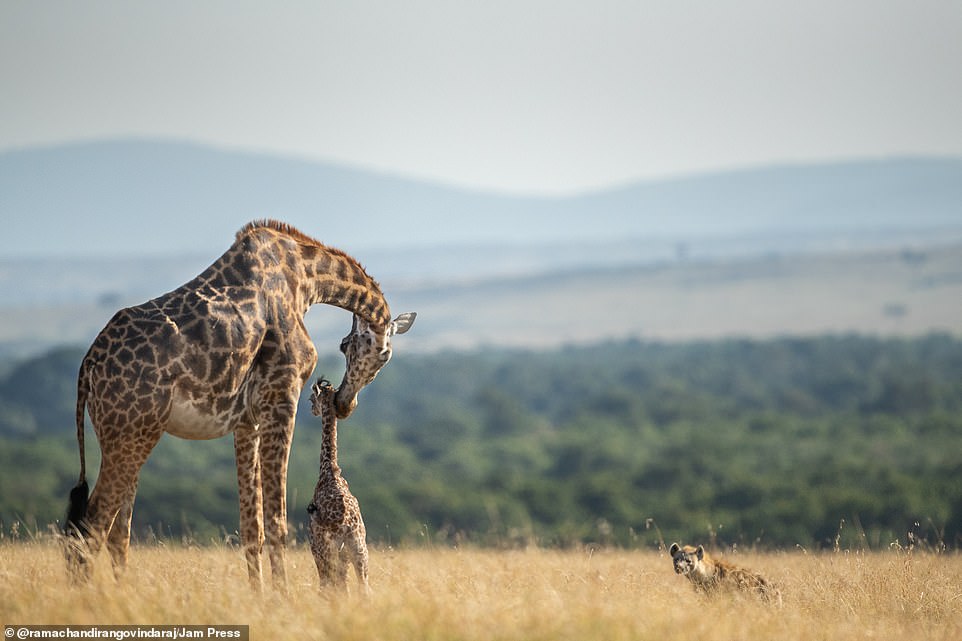 Shortly before the lioness attacked the mother giraffe had managed to see off a hungry hyena, who stalked the pair for half an hour before eventually giving up