One dead, 12 injured after random drive-by shooting spree near Phoenix

An apparently random drive-by shooting spree in the suburbs northwest of Phoenix has left one person dead, three others shot, and another nine treated for minor injuries.

Police in Surprise, Arizona confirmed on Thursday afternoon that the suspected shooter’s vehicle had been intercepted by officers, and that a lone suspect was in custody.

The chaotic shooting spree spanned across eight separate scenes where shots were fired, as the gunman drove a white SUV through the area firing wildly at strangers, investigators said.

The suspect vehicle in the shooting spree is seen after being stopped by police. One suspect is in police custody after the drive-by shooting rampage on Thursday in Arizona 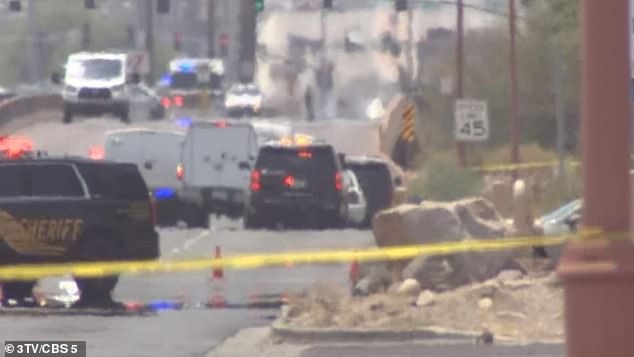 Investigators respond to the scene of one of the shootings. The chaotic shooting spree spanned across eight separate scenes where shots were fired

FBI agents were spotted on the scene assisting local investigators, according to AZFamily.com.

Peoria police say there were at least 13 victims over the course of the hour and a half shooting spree, including four gunshot victims, one of whom died.

The other three gunshot victims are expected to survive. The additional injuries included cuts from broken glass and similar shrapnel injuries, police said.

Sgt. Greg Welch told DailyMail.com that the shootings appear to have been carried out ‘at random’.

Arizona resident Hailee Beaton said her mom was shot by the unnamed suspect. It is not clear what condition her mother is in.

At 4pm, she tweeted to warn people to stay off the road as someone was ‘driving around and shooting random cars.’

‘There’s multiple victims, including my mom that have been shot or have had their vehicles shot on Bell Road, Union Hills and the 303.’ 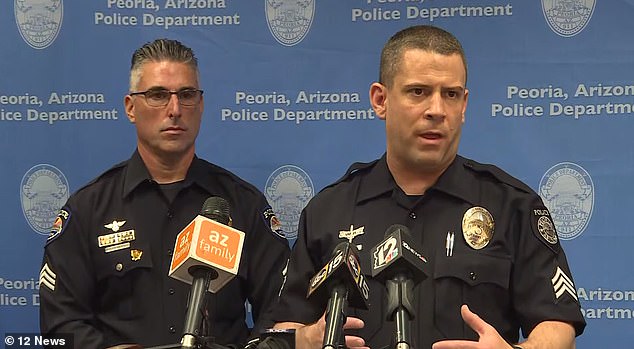 The first known shooting happened near 115th Avenue and Bell Road at around 12.30pm.

A few minutes later, a vehicle was shot at on the Loop 303 and El Mirage Road in Surprise.

Someone else was shot in their car shortly after.

A woman was later shot in Peoria, southeast of Surprise. She suffered from non-life-threatening injuries.

The fatal shooting occurred on the Loop 101 at Thunderbird Road, where a victim was found dead inside a car.

Police confirmed there were at least eight separate shooting incidents before the suspect was apprehended.

The deadly spree came to an end when a crew of firefighters spotted an SUV matching the suspect vehicle description and alerted nearby police units in Surprise. 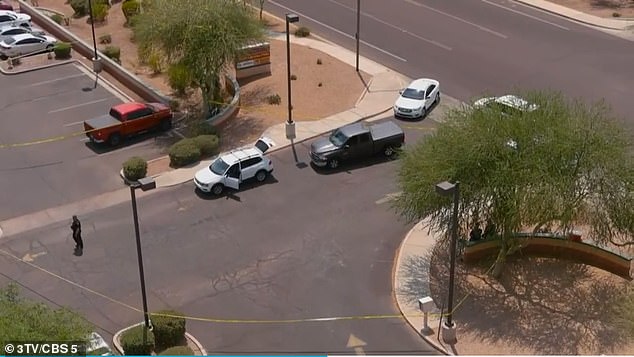 Investigators said that the suspect was cooperative when confronted, and taken into custody without incident. A gun was recovered from the vehicle, police said

The vehicle description had been broadcast widely over emergency radio networks in the area after a 911 caller provided a detailed description, including license plate number, police said.

Investigators said that the suspect was cooperative when confronted, and taken into custody without incident.

A firearm was recovered from the suspect’s vehicle by Surprise police officers who effected the stop.

‘This is an extremely complex investigation because it involves multiple jurisdictions,’ said Sgt. Sheffert.

State troopers are still investigating the situation on the highway, ABC 15 reports, and in a separate tweet, Peoria police said the suspect was connected to ‘several shootings’ in the West Valley.