One in five drivers are too nervous to get behind the wheel abroad, a study has found.

A poll of 2,000 British motorists found 19 per cent would never drive overseas, with China, Thailand, Mexico, Saudi Arabia and Russia the five countries they fear hitting the road in the most.

According to the research, 63 per cent feel less confident driving on roads abroad than they do on roads back home.

One in five drivers are too nervous to get behind the wheel abroad, a study has found

The biggest concern about taking to the road on holiday is how unfamiliar it will feel, while 46 per cent are worried they may accidentally break a road law they didn’t know about.

Additionally, 38 per cent are wary of scuffing or denting the rental car because they’re not used to the vehicle.

Emma Grimster, spokesperson for TravelSupermarket, which commissioned the research, said: ‘Renting a car abroad may seem daunting if you’ve never driven abroad before, however, the freedom it gives you can enable you to have a fantastic holiday.

‘Having your own wheels can open up a whole world of opportunities for exploration and discovering a destination in a new and unique way.

‘Being in control of your own destiny and going anywhere you like, anytime, certainly beats waiting for the bus.’ 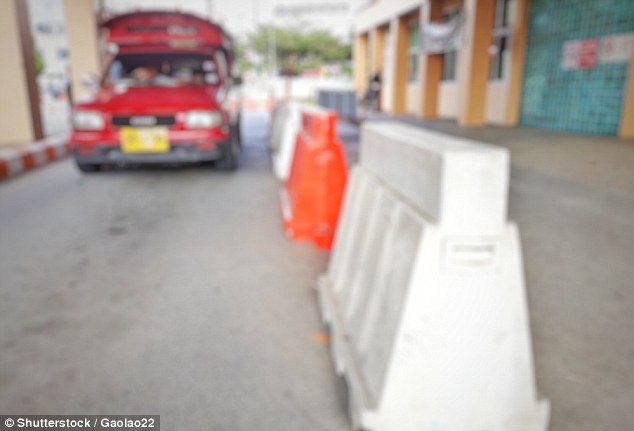 Heading onto the open road: A red hire car waits for guests in Chiang Mai, Thailand – the second-most intimidating country to drive in for Brits

The top 20 countries Brits are afraid of driving in

When it comes to hiring a car abroad, one in 10 take the opportunity to hire a vehicle that is nicer than the one they drive at home.

Though 56 per cent will most likely end up with the most cost-effective vehicle, while 13 per cent choose the model they feel will be the safest.

The biggest perk to hiring a car abroad is the freedom it affords you to travel anywhere you like, and one in four enjoys the novelty of getting to try out a new vehicle during their travels.

Interestingly, 51 per cent think hiring your own car gives you the opportunity to see more of the natural landscape and 36 per cent are also glad to avoid the confusion of different public transport systems.

It also emerged older drivers are more likely to bring their confidence on UK roads with them on holiday, while younger drivers need more convincing to flex their motoring skills abroad.

Male drivers are more susceptible to being enticed by the open road on holiday, though they are also more likely to knowingly break a road law abroad, too.

When driving on holiday, women are more concerned about the dangerous driving of other motorists on the road, while men worry they may inadvertently damage the rental car and lose their deposit.

‘So much of the anxiety surrounding renting a hire car on our hols is a fear of the unknown, however, once you’ve tried it, it may be much easier than you imagine,’ added Emma Grimster.

‘Places like Spain, Portugal, France and the US have great road networks and are often less congested than major routes in the UK.

‘Prepare for your trip by doing some research into the rules of the road in your destination.

‘Also be aware of items you must have in the car with you e.g. a spare wheel, warning triangle and reflective jacket when driving in Spain.

‘Take it steady and stick to the speed limit, taking in the local scenery as you travel.’