One in five children missed out on their first choice secondary school this year following a rise in applications caused by a baby boom.

New government statistics show 19.1 per cent lost out this year, a rise on the 17.9 per cent who were disappointed in 2018.

Department for Education (DfE) analysis says the trend is down to ‘rising births since 2002 continuing to move into secondary level.’

Previous government memos have noted the baby boom has been fuelled by migration, as mothers from abroad have on average a higher fertility rate than those who are British-born.

Today’s figures will mean more children are going to schools this September which are unsuitable for them, poorly-performing or far away from their homes.

The proportion missing out on their first choice has risen steadily from a low of 13.3 per cent in 2013.

Meanwhile, seven per cent missed out on all of their three preferences this year.

Yesterday Geoff Barton, general secretary of the school leaders’ union ASCL, said: ‘The fact that more families have missed out on their preferred choice of secondary schools this year is a sign of the pressure on the system as pupil numbers rise.

‘This is likely to intensify over the next five years because the number of secondary school pupils is expected to increase by another 376,000.

‘Additional school places will need to be planned carefully to match demographic need.

‘But this is only one part of the picture.

‘We must ensure every family is able to access a place in a good local school wherever they live, and that they don’t feel the need to chase places in over-subscribed schools.’ 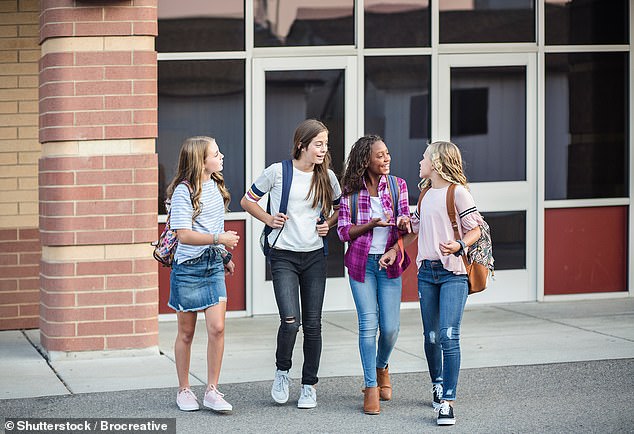 Schoolgirls pictured leaving school for the day: A smaller and smaller percentage of children are getting their first choice place

He said the answer was to improve those schools which are struggling with more funding and measures to tackle teacher recruitment.

‘We must make every school the preferred choice of families,’ he added.

The picture was better at primary level, where the effects of the baby boom are now easing off.

The government stressed that at both secondary and primary level, the vast majority of children got one of their three choices.

It added that the overall school population has increased by more than 635,000 pupils since 2010.

School standards minister Nick Gibb said: ‘Wherever they live and whatever their background, children deserve the best in education.

‘Since 2010 we have created more school places and seen school standards rise, meaning there is a greater opportunity for pupils across the country to go to a good or outstanding school.

‘This means that, despite rising pupil numbers and the highest number of applications at secondary level for twelve years, the vast majority of parents sending their children to school this September received one of their top three preferences of either primary or secondary school.’

The government is on track to create a million new school places by the end of this decade – the largest increase for at least two generations.

Mr Gibb said standards have risen under the Tories, with 1.9 million more children attending good or outstanding schools compared to 2010.