More than one in five households had to delve into their savings to pay their rent or mortgage earlier this year, official data has revealed.

Renters were slightly more likely than mortgage-holders to have used their savings for this purpose, according to the latest English Housing Survey which covers April and May.

Personal finance experts said the figures were ‘concerning,’ especially given that inflation is now pushing up the cost of living even further.

If these trends continued, they said it could lead to a sharp increase in defaults.

Using up savings: Over one in five households had to delve into their savings to pay their rent or make a mortgage repayment between April and May this year

Robert Payne, a director at Langley House Mortgages, said: ‘These are concerning statistics that show an unsustainable pattern of financial behaviour amongst some.

‘If these trends carry on then we are heading towards a large number of defaults, which is bad news for everyone.

‘It is unclear why this is happening but if it is linked to the impact of Covid-19 then we are potentially only witnessing the tip of the iceberg, with extremely worrying times ahead of us.’

In total, around 22 per cent of households had to use their savings to pay for their mortgage or rent over the period, comprising 29 per cent of private renters, 28 per cent of ‘social renters’ and 19 per cent of people with a mortgage.

Daniel Wiltshire, an actuary and independent financial adviser at Wiltshire Wealth, said: ‘These findings are concerning enough, but with inflation forecast to rise above 4 per cent by the end of the year and the cost of borrowing also expected to increase, household finances are set to be squeezed even further.

‘There are sadly tough times ahead.’ 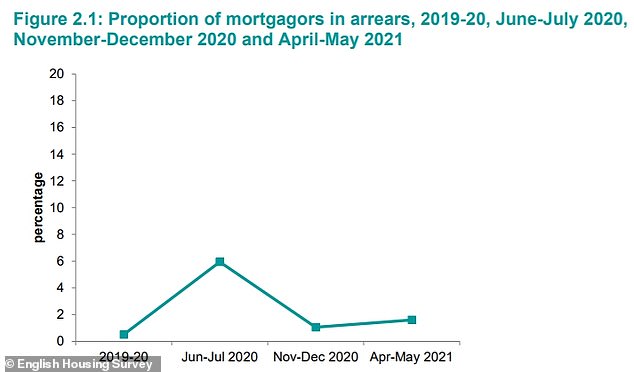 Tough times? The percentage of people in arrears with their mortgage over time 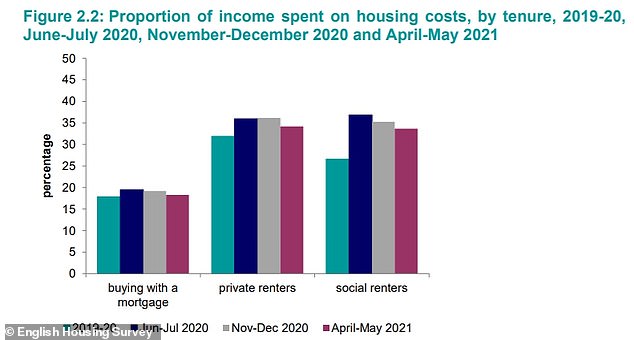 Costs: The percentage of income spent on housing costs over time

In 2019, around 59 per cent of private renters surveyed said they expected to buy their own home at some point in the future.

By the summer of last year, this figure had fallen, with only 49 per cent saying they expected to own a home.

‘In April-May 2021, expectations to buy among renters declined further with 45 per cent of private renters and 20 per cent of social renters saying that they expect to buy their own home’, the survey published by the Department for Levelling Up, Housing and Communities said.

On the mortgage front, between April and May this year, 2 per cent of homeowners were in arrears with their mortgage, which is higher than the pre-pandemic rate of 0.5 per cent, the report said.

Ten per cent of mortgagors said they were finding it ‘rather or very difficult’ to keep up with their mortgage payments in the last year. This figure is unchanged from the past few months, but higher than the 4 per cent level seen before the pandemic.

The proportion of income people typically use to pay for their mortgage repayments is around 18 per cent.

This has remained stable over the course of the pandemic and is the same proportion that mortgagors spent, on average, in 2019, today’s report said.

Almost a million, or 4 per cent, of households said they had moved to a different home since the end of last year, according to the findings.

Among the households that had moved, 16 per cent cited Covid-19 as the main reason for the move and 21 per cent said the pandemic had had at least some impact on their decision to up sticks to a new property.

Over the past year, the housing market has been bolstered by cheap mortgage deals, buyer demand for more space and the Chancellor’s stamp duty holiday.

Mortgages will become more expensive when interest rates rise, and anyone with a variable mortgage rate deal will see their rate increase in line with any Bank of England changes.

Homeowners with a fixed mortgage deal will only be affected by any rise in interest rates once their current deal expires.