One in nine American men have the oral human papillomavirus infection, or HPV, new figures suggest.

Oral HPV differs from the genital strain because it is contracted in the mouth and throat through oral sex, rather than penetrative sex.

Health researchers from the University of Florida studied data of people who contracted HPV in the United States and found an estimated 11.5 million men and 3.2 million women have the oral infection.

Oral HPV can cause throat cancer. Indeed, in 2013, Michael Douglas said (then retracted) that he contracted cancer from giving oral sex to his wife, Catherine Zeta-Jones.

As of 2016, US health officials recommend that all children – not just females – between the ages of 11 and 12 receive the jab to lower their risk of infection.

Actor Michael Douglas, 73, said in an interview in 2013 that he got throat cancer from performing oral sex on his wife, Catherine Zeta-Jones. He then retracted the statement

HPV is the most common sexually transmitted infection in the US with an estimated 14 million people infected every year.

The human papillomavirus (HPV) is the name given to a family of viruses.

There are over 100 different types of HPV, with around 40 types that affect the genital area.

Different types of HPV are classed as either high risk or low risk, depending on the conditions they can cause.

For instance, some types of HPV can cause warts or verrucas. Other types are associated with cervical cancer.

In 99 percent of cases, cervical cancer is said to occur as a result of a history of infection with high-risk types of HPV.

The findings, published in the Annals of Internal Medicine, found men who had multiple sexual partners were at a higher risk to contract oral HPV.

Researchers analyzed CDC data to see how many people were reported to have HPV.

Nearly all men and women will be contracted with one form of HPV, there are an estimated 150 types, in their lifetime, according to the CDC.

The data showed that annually an average of 38,000 cases of HPV-related cancers are diagnosed in the US.

But men are more likely to develop a type of head or neck cancer, known as oropharyngeal squamous cell carcinoma, than women.

One preventive strategy for protecting oneself against HPV is to get an injection shot.

This vaccination has experienced controversy within the public sphere on if it actually can protect someone from HPV and related cancers.

Michele Bachmann, a Tea Party candidate, led a campaign against the vaccination in 2006.

She, and other Republicans including Sarah Palin and Rick Santorum, claimed getting the vaccination would cause mental disorders.

There has been zero evidence to prove the vaccination causes mental disorders in those who receive it. 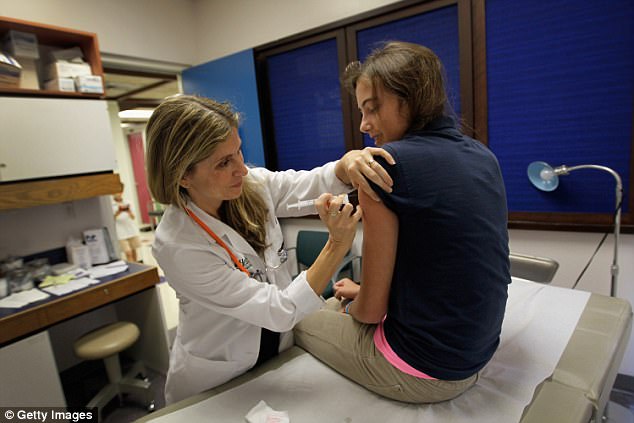 The HPV vaccination is a three-part series to help prevent the virus and the cancers that can develop from it. The virus can develop into throat, vagina, penis and anus cancer if it goes untreated. HPV is the most common sexually transmitted disease in the US

CDC recommends for all children in the US to receive the vaccination between the ages of 11 and 12.

Forty percent of girls and 22 percent of boys aged 13 to 17 years of age had completed the three-vaccine series by 2014, the organization found.

In contrast, the National Health Service in the UK recommends for only females to receive the vaccination between the ages of 12 and 13.

The country is not looking to extend the vaccination to males at this time because it is ‘unlikely to be cost-effective’, according to the The Joint Committee on Vaccination and Immunization.

The vaccination was first introduced for females in a three-part series to help prevent against cervical cancer that forms in the cervix.

Cervical cancer occurs from genital HPV, which is skin-to-skin contact during sex.

Men in the US are now encouraged to receive the jab after data revealed they too were at risk from developing HPV and cancers associated with the virus.

Condoms are a protective barrier that health experts recommend for men use in order to prevent the spread of the virus.