One in six families are left with a funeral debt of £1,700

Funeral poverty has reached an all-time high, as those who struggle to pay take on an average debt of almost £1,700, figures show.

The average cost of a funeral has increased to £3,784 – an increase of 3% on last year – according to the Royal London National Funeral Cost Index.

One in six of those surveyed (16%) said they struggled with funeral costs, with these people taking on an average debt of £1,680 and one in ten selling possessions to repay the amount.

The average cost of a funeral has increased to £3,784 leading to one in six families taking on an average debt of £1,700 to pay for a ceremony (stock photo)

The report shows a “postcode lottery” continues, with prices ranging from £3,036 to £6,516 depending on location.

Kensal Green in London is the most expensive location in the UK for a funeral for a second year with an average cost of £6,516 – an increase of 1% from 2016.

Belfast remains the cheapest location with an average cost of £3,036.

Lower cost funeral options continue to be popular, with the study finding that 10% of all cremation funerals did not include a ceremony or service.

Royal London’s funeral cost spokeswoman Louise Eaton-Terry said: “With thousands of bereaved people struggling to pay funeral costs and taking on nearly £1,700 in debt to ensure their loved one has a decent send-off, it is clear that Government action to tackle funeral poverty is long overdue.’ 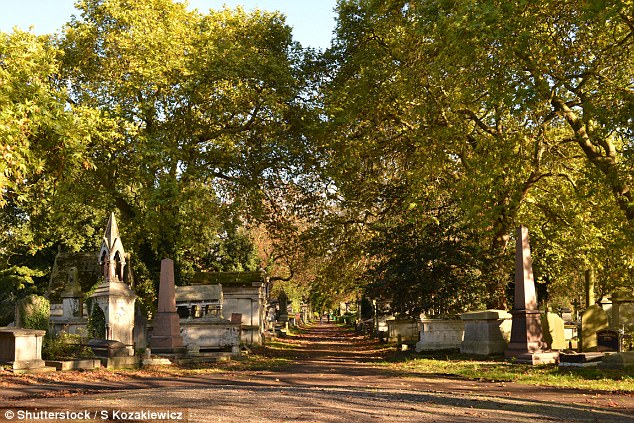 Kensal Green in London is the most expensive location in the UK for a funeral. Pictured is the cemetery

“Unfortunately, only the Scottish Government has acted in respect of the shortage of burial space crisis that affects around 25% of the population.

“This additional driver of funeral poverty requires urgent attention in England and Wales.”