One Nation billboard truck set on fire in Tasmania

Pauline Hanson has furiously slammed her ‘left-wing’ critics for ‘acting above the law’ after a One Nation truck was set alight by a mystery arsonist.

Ms Hanson said on Sunday night that the billboard truck was parked outside a shop in Hobart while Tasmanian senate candidate Adam Lambet ducked inside to buy groceries.

She said someone was seen torching the vehicle before fleeing the scene.

In video posted online the truck, with One Nation posters on it, can be seen going up in flames.

‘It is amazing how the left call for tolerance but act like they’re above the law when you don’t agree with their ideologies,’ Ms Hanson tweeted.

‘This is what the left do to conservative parties.

Mr Lambert posted a video to his Facebook of him on the scene shortly after the incident, as emergency services lights can be seen flashing behind him.

‘If you don’t like us don’t vote for us, but for those magnificent supporters who have voted for us this is a little more encouragement on why we have to work a bit harder for you guys next time,’ he said.

Hanson also took the opportunity to call out people who allegedly bashed a One Nation volunteer in Western Australia on Saturday.

‘Yesterday one of our volunteers was bashed and called a ‘white dog’ because he asked a man to stop wrecking our signs in Cowan.

‘I’m concerned about where politics is heading in this country.’

In video posted online the truck, with One Nation posters on it, can be seen going up in flames in Hobart

Social media users were quick to condemn the arsonist for setting the truck alight.

‘Have a close look at yourselves people if you cant respect our (politicians) soon there will be riots,’ one man wrote.

‘This is not democracy at all. This is what this world is coming to. I am disgusted that our future generations are becoming radicals,’ added another.

‘This is left-wing terrorism,’ wrote a third.

The arson attack comes after a One Nation volunteer was targeted by a family in the Western Australian seat of Cowan.

One Nation Senator Peter Georgiou posted photos of a man bleeding to social media on Saturday.

A spokesman for Tasmania Police told The Mercury that police had attended the fire, but weren’t able to provide further information. 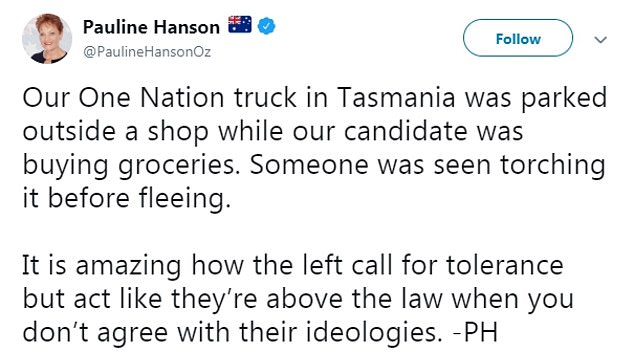 Hanson Tweeted on Sunday night that the truck was parked outside a shop in Hobart, while a senate candidate ducked inside to buy groceries, she went on to say she is concerned about where politics are heading in Australia