One of Junior Guzman-Feliz’s killers has reportedly hospitalized a Rikers guard during a violent attack just days after he and four other Trinitarios gang members were found guilty of brutally hacking the 15-year-old to death outside a Bronx bodega.

Jose Muniz, held at Rikers awaiting transfer to a state prison, is accused of attacking the correctional officer leaving him with a dislocated shoulder Tuesday night, The New York Post reports.

The five Trinitarios gang members were among more than a dozen suspects who were arrested after the brutal, fatal attack outside a convenience store in The Bronx on June 20, 2018, which was caught on video.

Following the alleged attack on a guard Tuesday the Correction Officers’ Benevolent Association said: ‘These attacks are deplorable and we take assaults on our officers very seriously. We are pursuing the re-arrest of those responsible.’

The mother of Guzman-Feliz’s thanked Jesus after a jury convicted the five men of first-degree murder Friday. 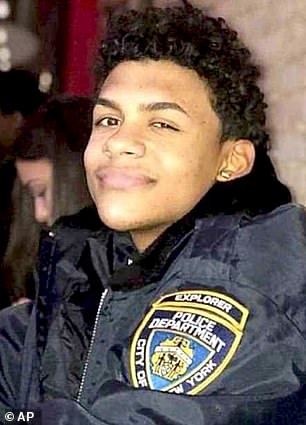 Five men on Friday were found guilty of hacking to death Lesandro ‘Junior’ Guzman-Feliz, 15, right, outside of a Bronx bodega last year including Jose Muniz, left 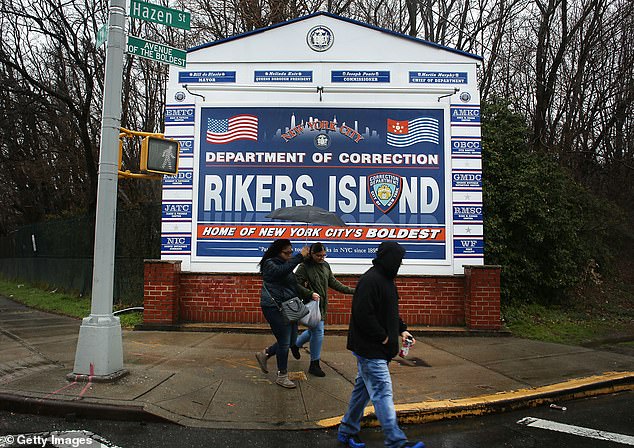 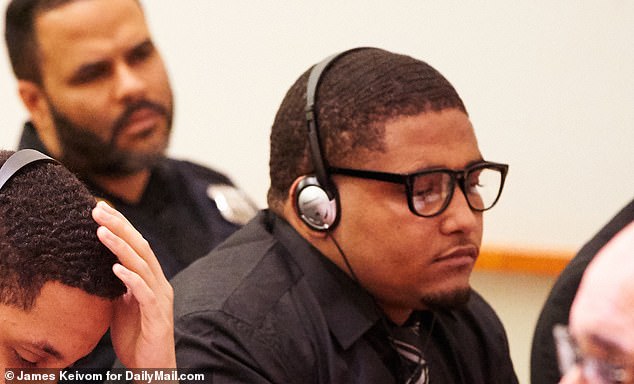 ‘I want to say thank you, Jesus,’ Junior’s mother, Leandra Feliz, said to the media after the verdict was handed down Friday afternoon.

‘I’m not going to have my son back,’ Leandra said, according to the New York Post, ‘But those killers, those murderers, they won’t be outside killing another kid.’

Junior’s father also thanked the jurors for the verdict.

‘I’m grateful of the good job the jury did today – it was a just decision,’ Lisandro Guzman said, according to ABC 7. ‘My son is not coming back, but at least those thugs are not going to be on the street.’

Junior’s brother, Manny Ortiz, added that ‘It’s been a terrible year especially for my mom and now I see a smile on her face. It is a happy ending.’

During the six week trial, Leandra was said to have been so distraught that she was eventually barred from listening to testimony in the courtroom. Instead, she had to watch the proceedings on a video feed in a room nearby.

Leandra denied a defense lawyer’s attempts to paint Junior as a gangster who died in some form of gang retribution. Officials had previously also denied this claim.

‘My son was a good kid,’ Leandra said to press. ‘He was only 15 years old … he had never been into any trouble in his life until those killers — those murderers — murdered my son.’

‘Today’s verdicts will not bring Junior back. Nothing can,’ Bronx Borough President Ruben Diaz Jr said in a statement addressing the outcome of the trial Friday. ‘But these verdicts will send a message to those who would commit acts of senseless violence, and help us move forward and bring closure to this awful chapter in our borough’s history.’ 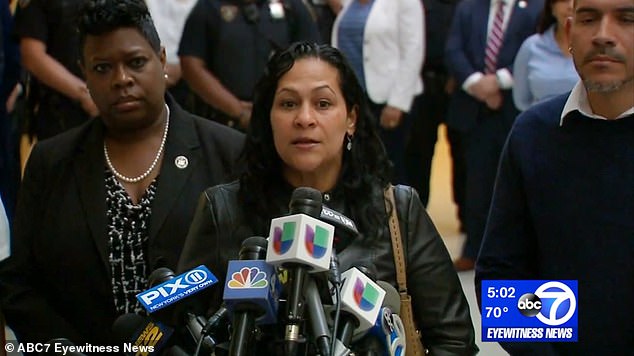 After the guilty verdicts were handed down, Junior’s mother, Leandra Feliz (center), told media that she thanked Jesus for the decision 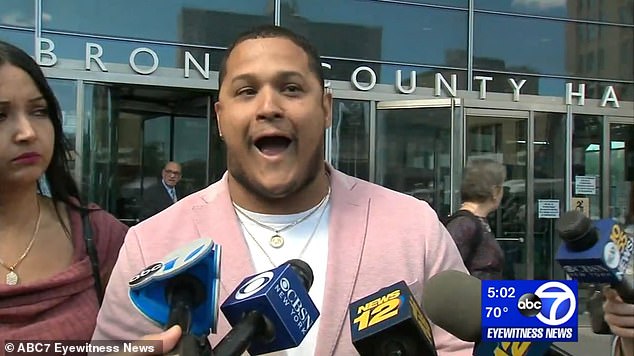 Junior’s brother, Manny Ortiz, told press that it had been a terrible year for the family, but that the guilty verdicts were ‘a happy ending’

While mulling over the verdicts, they asked to re-watch graphic surveillance video showing the moment Junior was dragged out of the convenience store to his death.

They also asked to rehear testimony and review all the evidence the prosecution had in the case.

NBC New York reported that Muniz was overheard exclaiming in Spanish ‘Trinitarios to the day I die’ as he was led out of the courtroom.

All five convicted killers face life in prison when they are sentenced on July 16.

Emotions in the courtroom ran high during the quintet’s six-week trial, which was marked by several outbursts from Junior’s devastated mother, Leandra Feliz.

When the gruesome video capturing her son’s final moments was played for the jury last month, Leandra began howling in agony and had to be escorted out. 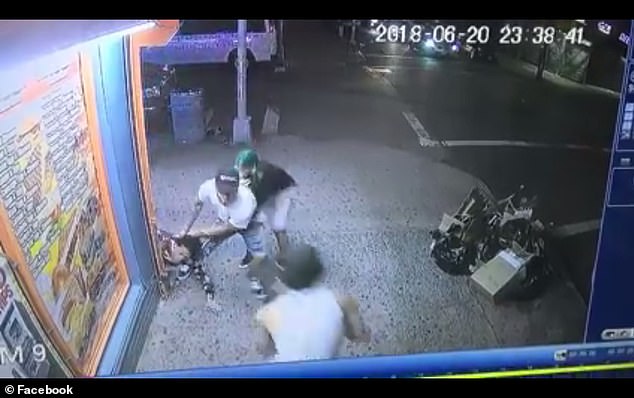 The gang members spotted aspiring NYPD detective, Junior Guzman-Feliz, walking the streets and mistook him for a notorious member of the rival Sunset Crew 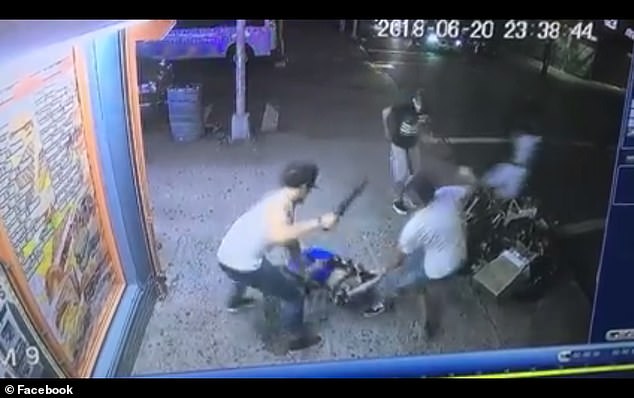 Junior was dragged out of the shop by his ankles, and savagely hacked away at him with knives and a machete on the corner of the street 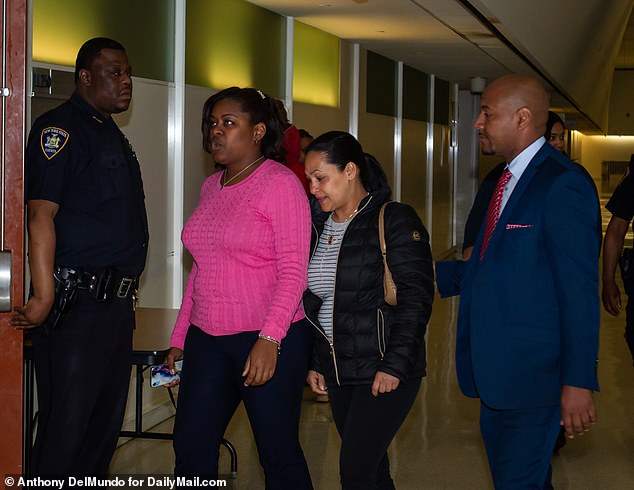 The suspects’ six-week trial in The Bronx was marked by several outbursts from Guzman-Feliz’s devastated mother, Leandra Feliz (in striped shirt on May 23)

Shortly afterwards, the gang members spotted Junior on the sidewalk and mistook him for a member of the rival clique.

At first the, men pursued him in cars and blocked him from seeking refuge inside a hospital, before chasing him on foot.

Reyes recalled for the jury the moment he followed Junior inside the bodega, falsely telling the shopkeeper the boy had ‘done something’ to his grandmother, and needed to be dealt with.

He watched on as other members of the Trinitarios gang dragged the terrified 15-year-old boy, who aspired to become an NYPD detective, out of the store by his ankles, and savagely hacked away at him with knives and a machete on the corner of the street.

Reyes testified it was Estrella who used a four-and-a-half inch knife to slice Junior’s jugular vein, causing him to bleed out in the street.

The remaining nine suspects will be tried for Junior’s murder in September.