A woman who was six years old during the 1921 Tulsa race riot, one of the worst race riots in U.S. history, has died aged 103.

Olivia Hooker was a small child when the riot, that began on May 31, destroyed much of a Tulsa neighborhood that had been known as ‘Black Wall Street.’

She told National Public Radio in an interview this year that she hid under a table as a mob of torch-carrying people destroyed her family’s home.

Olivia Hooker (pictured in 2005) was 6 when the riot, that began on May 31, destroyed much of a Tulsa neighborhood that had been known as ‘Black Wall Street’

The violence began after a black man allegedly assaulted a white woman in an elevator. The number of deaths was never confirmed and varies from about three dozen to 300.

The cause of her death isn’t known. She had no immediate survivors.

Dr Hooker was born in Muskogee, Oklahoma on February 12, 1915, and was one of five children.

Dr Hooker taught in an elementary school after graduating from Ohio State University. She got her master’s degree in psychology from Teachers College at Columbia University before going on to earn a doctorate from the University of Rochester.

She was among the first black women to serve in the Coast Guard and became an associate professor of psychology at Fordham University in New York. 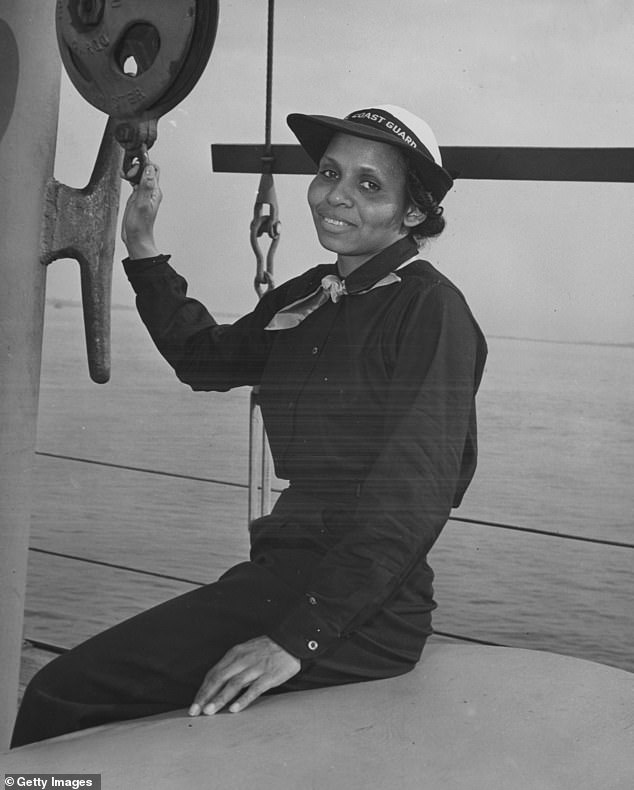 Dr. Hooker was among the first black women to serve in the Coast Guard and became an associate professor of psychology at Fordham University in New York

Tulsa Mayor G.T. Bynum announced in early October that he plans to re-examine whether mass graves hold remains of those killed as the 100 year anniversary of the  Tulsa race riot draws near.

He said a man who was a child in 1921 told a state commission studying the massacre that he remembered seeing bodies dumped in a cemetery.

‘Councilor [Jack] Henderson and I turned our findings over to the City Administration, but nothing ever came of it,’ Bynum wrote on Facebook.

‘I promised myself that if I ever became mayor and had the authority to direct further examination I would,’ he added.

There are three main potential sites that will be investigated. The first is Newblock Park.

The second is Booker T. Washington Cemetery, ‘where previously marked graves were found in a disturbed state by researchers in the late 1990s,’ Bynum said in his Facebook post.

Lastly, the Oaklawn Cemetery will be investigated. On one side of the cemetery, there is a grassy field with no marked graves, according to Bynum.

If there are unmarked graves, the investigative team will then determine their nature to see if the bodies are consistent with the violence from the massacre or if they appear to be the remains of people who died from natural causes.

The mayor added he plans to speak with archaeological experts to come up with minimally invasive ways to look for mass graves in the three locations.

‘We do not begin this process with a certain outcome. We may not find any mass graves. Or we may. Tulsans are compassionate and supportive toward victims of violent crime – and that standard should apply whether they are victims in 2018 or 1921,’ Bynum wrote.

‘This is a matter of basic human decency,’ he added.

THE 1921 TULSA RACE RIOT: AN ATTACK ON GREENWOOD

After World War I, Tulsa was recognized for its affluent African-American community known as the Greenwood District.

The community was often referred to as the ‘Black Wall Street’ because of its thriving businesses and residential area.

But in June 1921, the community was nearly destroyed during the Tulsa Race Riot.

The events leading up to the riot began on May 30, 1921, when a young black man named Dick Rowland was riding in the elevator with a woman named Sarah Page.

The details of what followed vary from person to person and it’s unclear what actually happened. 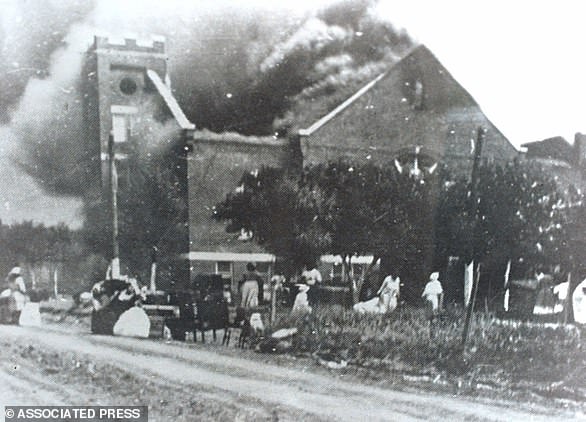 During the Tulsa Riot, 35 city blocks were completely destroyed and more than 800 people were treated for injuries. Historians believe as many as 300 people may have died in the riot

Rowland was arrested the next day by Tulsa police.

Subsequently, a report in the Tulsa Tribune dated May 31, 1921, started a confrontation between black and white armed men at the courthouse.

Shots were fired and the African-Americans retreated to the Greenwood District.

In the early morning hours of June 1, 1921, Greenwood was looted and burned by white rioters.

During the riot, 35 city blocks were completely destroyed and more than 800 people were treated for injuries.

Historians believe as many as 300 people may have died in the riot.

In 2001, the Race Riot Commission was organized to review the details of the deadly riot.