One person killed after Iran is struck by 6.3 magnitude earthquakes felt as far away as Dubai

At least one dead after Iran is struck by TWO earthquakes measuring between 6.4 and 6.3 in magnitude

At least one person has died after two moderate earthquakes struck the southern Iranian province of Hormozgan.

Iran’s Seismological Centre said the quakes struck Qeshm island in the Strait of Hormuz this afternoon. The epicentre of the quakes was 36 miles south-west of Bandar Abbas port, and about 640 miles south of the capital Tehran.

A second earthquake is understood to have hit the same area about a minute later. It said the magnitudes were 6.4 and 6.3, with the larger quake striking at a depth of about 11 miles.

State TV quoted Azizollah Konari, the Bandar Abbas governor, as saying a 22-year-old man died when an electric pole fell on top of him during the tremors.

It added that the quakes were felt in Kerman and Fars provinces, both located in the north of Hormozgan province.

Assessment teams have been deployed to the scene.

Iranian social media carried photos of damage from the quakes, including one of a wall that had collapsed on a car.

Iran lies on major seismic faults and experiences one earthquake a day on average.

A map shows the location of a 6.3-magnitude earthquake which occured around 39 miles northwest of Bandar Abbas in Iran 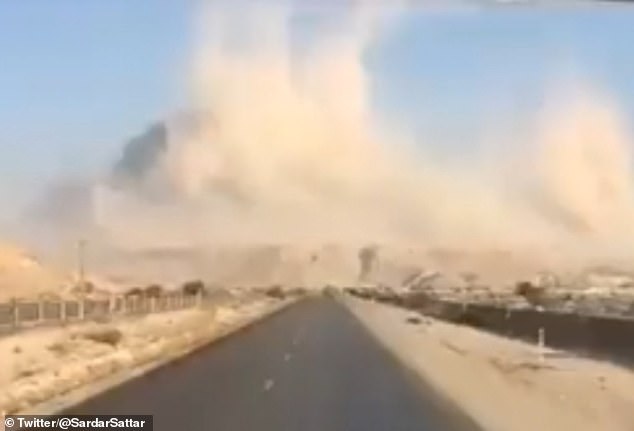 Reports of aftershocks have come from as far as Dubai and Saudi Arabia, with scores of people taking to social media.

‘The situation in Hormozgan Province was declared red and assessment teams were sent to the region to estimate the possible damage,’ the Iranian Red Crescent stated, according to Dutch news agency BNO News.

They added that nearly 6,200 people live within a 15-kilometer radius of the quake’s epicenter.

‘The quake was felt in several southern Iranian cities in the Hormozgan province,’ a local official said.