One shop delivers their donuts with a blood-chilling CLOWN

Hurts Donuts spiced up select locations of its national chain with the hilarious prank between September 25 and 26 at its Missouri, Oklahoma, and Texas, locations, having clearly taken a note or two from horror flick It, using Pennywise, a fire-haired clown famous for his red balloons, as its inspiration.

The special delivery clown donned a similar mask with red hair and balances a box of donuts in one hand and ominous red balloons in the other; the cherry on top of the chilling look was the clown’s menacing laughter and screeches as it nears its target. 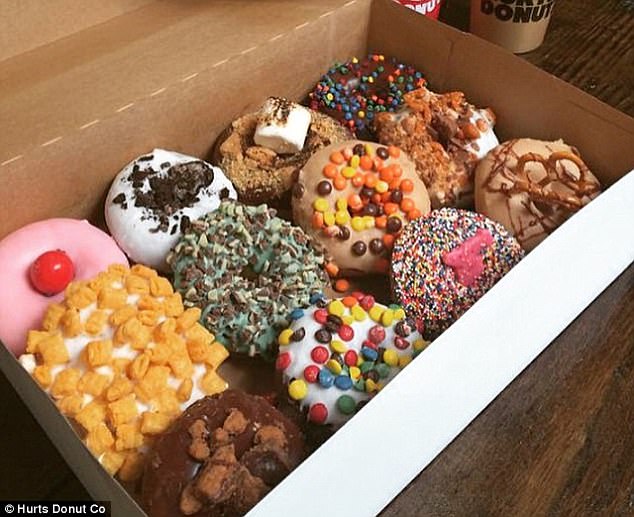 Sweeter by the dozen? The shop provided the creepy delivery at locations in Oklahoma, Texas, and Missouri as a fun prank to deliver their colorful cereal and candy covered sweets

The shop, which specializes in colorful cereal and candy topped donuts – has, took to Facebook to document their hilarious stunt and it turns out even the most professional and mature of adults get spooked by the sudden appearance of a mad clown.

‘Wanna scare the sh…Shprinkles out of your friends!?’ the brand shared on their Facebook page and revealed the clown prank costs an extra five dollars.

The advertisements for the special deal revealed a horrific clown wearing a yellow jumpsuit, jagged teeth mask, and fiery red hair, while posing in a dark and damp alleyway.

Some fans of the clown delivery have taken to social media to share their pranks unfold. One video sees Cole Blakley from Tulsa, Oklahoma, enter his office doorway only to find the creepy smiling clown holding balloons and a box of the sweets waiting on the other side. 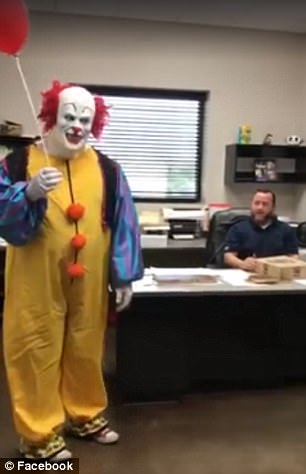 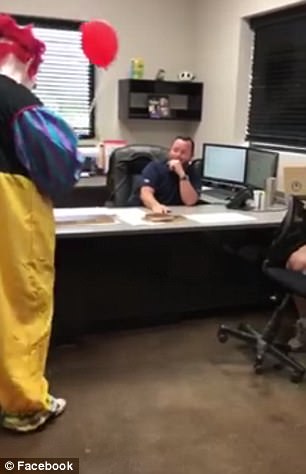 Why so serious? This Tulsa, Oklahoma man ran behind his desk when the clown surprised him in his office and he accepted his box of donuts after saying ‘oh HELL no…no eye contact!’ 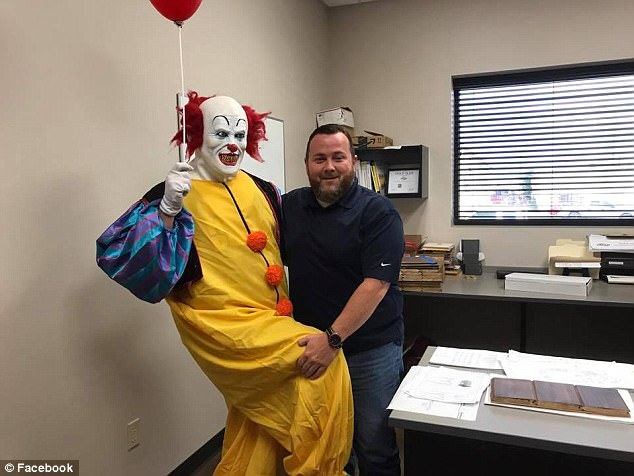 Overcoming fears: After getting over his initial shock, the man took the opportunity to strike a pose with the terrifying creature 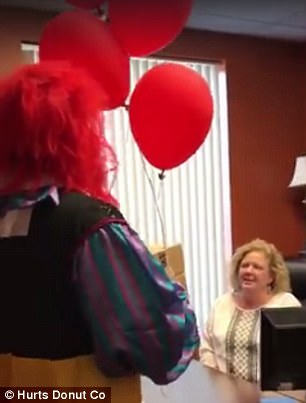 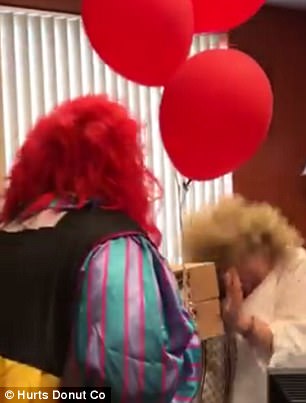 Trying to keep her cool: This Missouri woman did her best to look the clown dead in the eye, but when he suddenly screeched at her, she lost it and shrieked in fright

‘Oh HELL no!’ he screeched in his southern drawl and ran back to the safety of his office and scampered behind his desk. All meanwhile the clown, entertained by his fright, danced tauntingly towards him.

The clown is so creepy that a friend sitting in the office averts his eyes as the clown makes his way through the room.

‘I’m safe behind my desk! No eye contact, no nothing!’ Cole bellowed.

At the end Cole mustered up the courage to take a photo with his frightening friend, while his pals laughed behind the camera.

Another video displays a the clown entering a woman’s office in Springfield, Missouri. The blonde woman tried her best to keep her cool as the sinister man walked closer and closer.

She stood up and put both her hands out timidly to retrieve her box of donuts. When her hands are just about to grab the box, the clown leaned in with a spine-chilling cackle and she immediately lost her composure and her body trembled in fright, her shook her head as if saying no and lifted her hands in surrender. 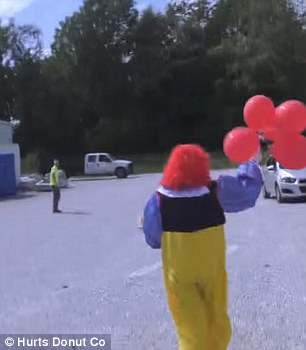 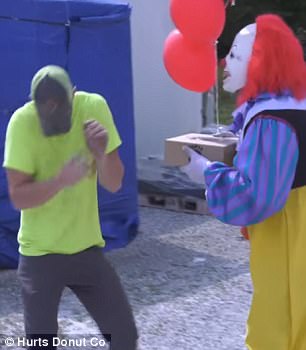 Run away! One man saw the clown approaching him from a distance and bolted in the opposite direction to avoid the creepy character holding on to red balloons 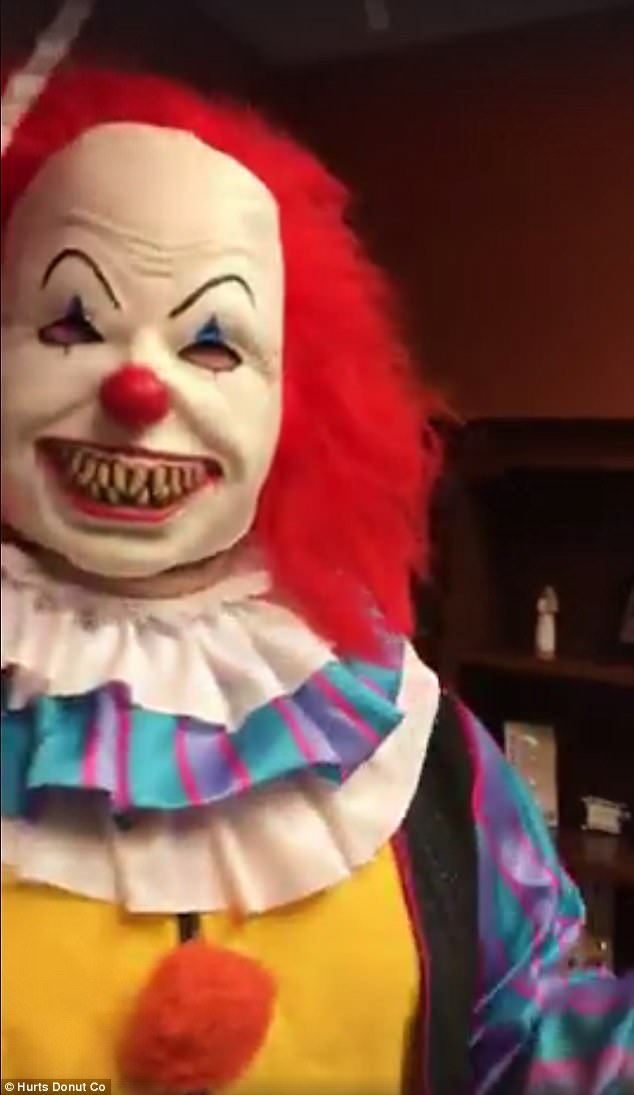 Scared ya! The donut clowns are far from cute and have sharp jagged teeth, a red horn nose, evil eyebrows and a shockingly yellow ruffled outfit for a sinister look 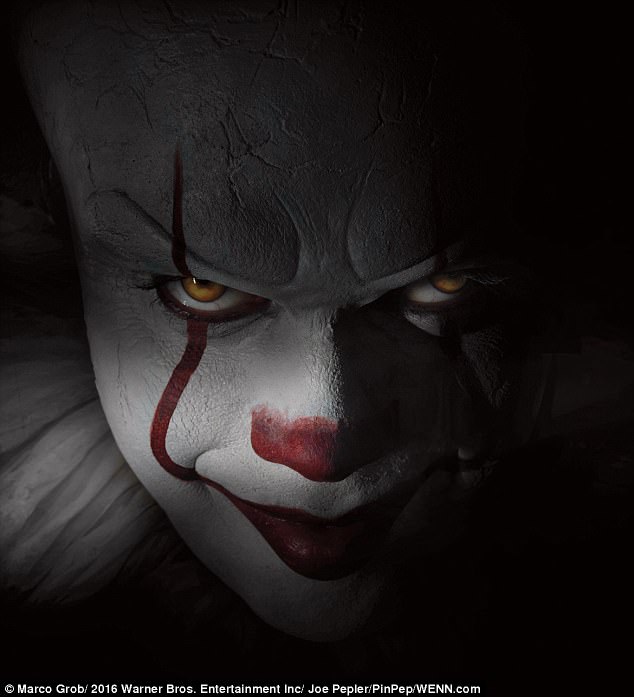 Pennywise, is that you? The clown’s inspiration is undoubtedly the protagonist of the horror movie IT, who wears a similar outfit, matching fangs and nose, and iconic red balloons

Taken aback she headed to the window to widen the gap between her and the clown and sat down in her desk chair, nearly in tears. She eventually gathered her bearing and swiveled her chair to face the wall to look anywhere, except at the hideous clown who kept piling boxes of donuts on her desk.

A third video displayed the clown walking across the gravel of a parking lot towards a lucky customer, only to have the young man in a green T-shirt bolt away, causing the clown to chase after him.

The man looked over his shoulder and eventually slowed down to accept the box of donuts, but he couldn’t manage to look the clown in the eye, and cowered in fear when the jester released his trademark cackle.

While the clown delivery special might be over, there’s a myriad of prank videos that flood the donut shop’s Facebook feeds to catch fans up on the hilarious reactions to the jester’s special entrance.

The Tulsa chapter also revealed that the clown will be back due to popular demand.

‘Our Scary Clown deliveries were so insanely popular, that we will be doing them again very very soon! We will keep our Facebook updated with information for the next round! Just keep an eye on our page,’ the shop wrote on their Facebook page.