One’s best friends: Penny Junor on the Queen’s passion for pooches and the end of a doggy dynasty

Until recently, Her Majesty’s corps of corgi companions accompanied her everywhere. With the passing of the last in line earlier this year, their royal reign is at an end. Penny Junor looks back on the doggy dynasty

I have just one dog. The Queen has had up to ten at times. My admiration for her as a dog handler knows no bounds, but even the best-trained dogs can misbehave – and our sovereign has had disasters and heartbreak alongside the friendship and fun.

Through her dogs I have discovered an aspect of the Queen that, despite more than 30 years of royal writing, I have never seen before. Off duty, she puts on comfortable clothes and immerses herself in the countryside that she loves, with her dogs and horses. This is when she is at her happiest. Dogs and horses are her passion and it is with them, and the people who share that passion, that she truly relaxes.

The Queen arrives at Aberdeen airport with a few of her pack, 1974. Dogs and horses are the Queen’s passion and it is with them that she truly relaxes

When historians look back over her reign they will marvel at her loyalty to a single breed. Before the death of her last Pembroke Welsh corgi in April (she still has two mixed-breed corgis), she had not been without the companionship of these little dogs since the age of seven. Over the years they had travelled with her by car, boat, helicopter, plane and train; they had sat with her for photographs and portraits; announced her arrival in any roomful of people, and helped countless guests to relax. The Queen also used the dogs to ease her own discomfort. Her family refers to it as the ‘dog mechanism’; if there is an awkward lull she will turn her attention to the dogs to fill the silence or bend down to give them titbits from her plate at table. If the situation becomes too difficult she will sometimes walk away and take the dogs out.

The Queen will fill awkward lulls by turning her attention to the do gs. Her family calls it the Dog Mechanism

On Princess Elizabeth’s 18th birthday her father gave her a corgi of her own – Susan. Every corgi that the Queen has had can be traced back to this dog. After her marriage to Prince Philip in 1947, what the waving crowds couldn’t see, as the couple headed off for their honeymoon, was that Susan was snuggled up in the carriage beside the Queen. The Duke of Edinburgh has been vying with the dogs for his wife’s attention ever since.

Princess Margaret never had as many dogs as her sister and mother, but perhaps the most famous one was a dachshund called Pipkin. Despite being vertically challenged, he was not put off by taller females: one day in the late 1960s, he and the Queen’s corgi Tiny had an illicit moment together behind the shrubbery and a new crossbreed – the dorgi – was born. The Queen and her sister were so pleased with the outcome that they deliberately mated Pipkin again. The Queen was not intent on creating a new breed; she and her sister regarded the dorgis as a bit of fun and they were such friendly little dogs they kept on doing it. When royal photographer Norman Parkinson asked the Queen how the corgis and dachshunds were able to mate, given their different heights, she replied, ‘It’s very simple. We have a little brick.’ 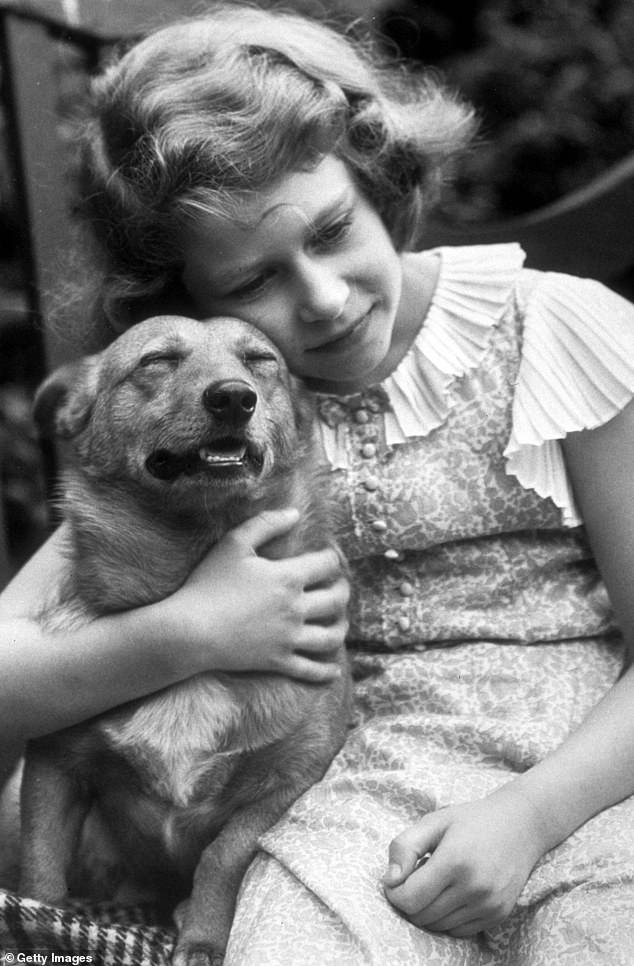 Ten-year-old Princess Elizabeth hugs the family corgi, 1936. It is her love of dogs as much as anything else that enables so many of us to feel we have a special connection with the Queen

Pampered though her dogs may have been, the Queen was nothing if not practical; their bowls were a motley collection of metal and porcelain. They did, however, eat very well, with diets tailored to their individual needs. In the country the dogs ate rabbit shot on the estates; otherwise it was a variety of fresh, cooked meat, vegetables and rice prepared for them in the royal kitchens, topped with a little biscuit, homeopathic and herbal remedies when required and a special gravy that, legend has it, was the Queen’s own recipe.

Whenever possible she fed them herself and it was an afternoon ritual; but not an unruly, frantic free-for-all. A footman brought the food and the bowls on a silver tray and laid out a plastic sheet to protect the carpet. The Queen then sat them in a semicircle around her and did the rest.

Roger Mugford, the animal psychologist who was brought in after some dramatic dog fights, watched her do this and was impressed. ‘The Queen looked across to the semicircle of quiet but salivating dogs congregated a few metres away and called each one in turn to take his or her food. There was never a growl or a rude look between the dogs. She explained that she had always been strict in requiring good manners at feeding time and each was obliged to wait his turn – the eldest to be fed first, the youngest last.’ 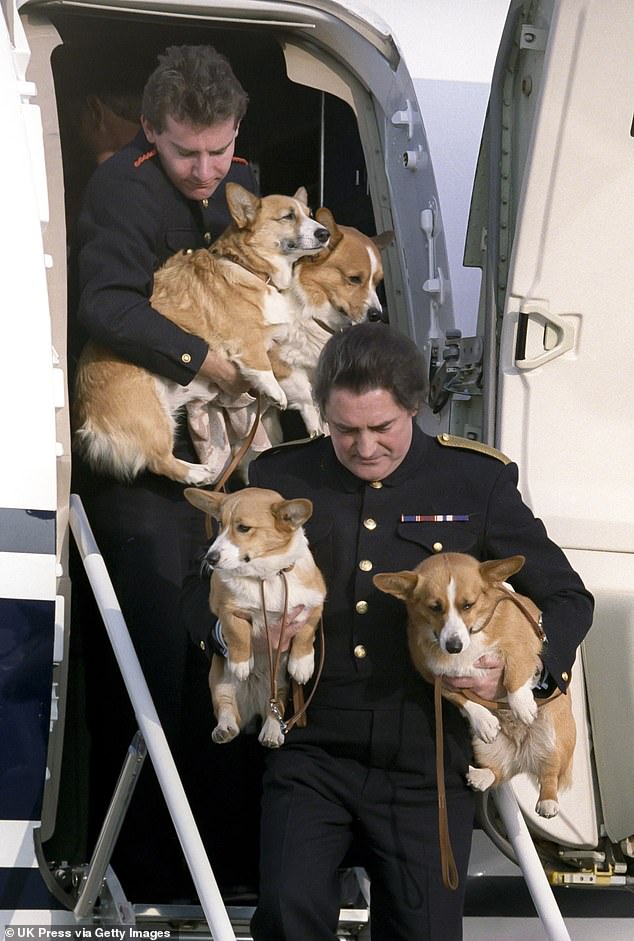 The Queen Mother’s corgis were frequent flyers. Princess Margaret never had as many dogs as her sister and mother, but perhaps the most famous one was a dachshund called Pipkin

They did it for the Queen because they were her dogs and she was their pack leader. But they had a habit of being deaf to the commands of anyone else, and feeding time was not always so calm. When she was away it would fall to a duty footman to feed the corgis and it is said that one, who was bitten during the food frenzy, took revenge by lacing the dog’s dinner with gin. The Queen was unamused when she found out and, although the man managed to hold on to his job at the palace, he was demoted and – to his joy – never again permitted to tend the dogs.

The corgis would get treats from the Queen’s plate at mealtimes. They clustered around the table, even when she had guests, and attended all the best parties. Although they were not invited to state banquets, I’m sure the Queen sometimes wished they were, for they helped put visitors, who could be tongue-tied on meeting the sovereign, at ease.

One such person is David Nott, a surgeon who works for ten months of the year in major London hospitals and volunteers his expertise for two months in the world’s most dangerous war zones. The day he went to lunch with the Queen he had just come back from Aleppo, centre of the fiercest fighting in the Syrian civil war. It was October 2014 and he had been back in the UK for only ten days; it usually takes him three months to readjust. When the Queen turned to talk to him he couldn’t speak.

‘I was thinking about the day when seven children from one family were brought into the hospital,’ Nott recalled. ‘I could feel my bottom lip quivering. All I could do was stare long and hard at the wall. She realised something was terribly wrong and asked if I’d like to see the dogs. A courtier appeared with the corgis, and a silver tin of dog biscuits was brought to the table. “Why don’t we feed the dogs?” she said, and we stroked and fed them for about half an hour as she told me all about them. The humanity of that was unbelievable. She wasn’t the Queen any more but this lovely person with a human face.’

The Queen has five regular residences, and corgis were a familiar sight in all of them, but none more than Buckingham Palace where they slept inside her private apartment. There was a special corgi room where they had raised wicker baskets lined with cushions. Schedule permitting, she still walks her dorgis, Vulcan and Candy, daily – and a corgi called Whisper she took in last year after the death of his owner, a former Sandringham gamekeeper. Even now, once they are safely in the country she will drive them around the estate. There are fewer dogs and they are older and more sedate these days, but at one time there were up to ten scrambling over the seats barking furiously at everything they passed. 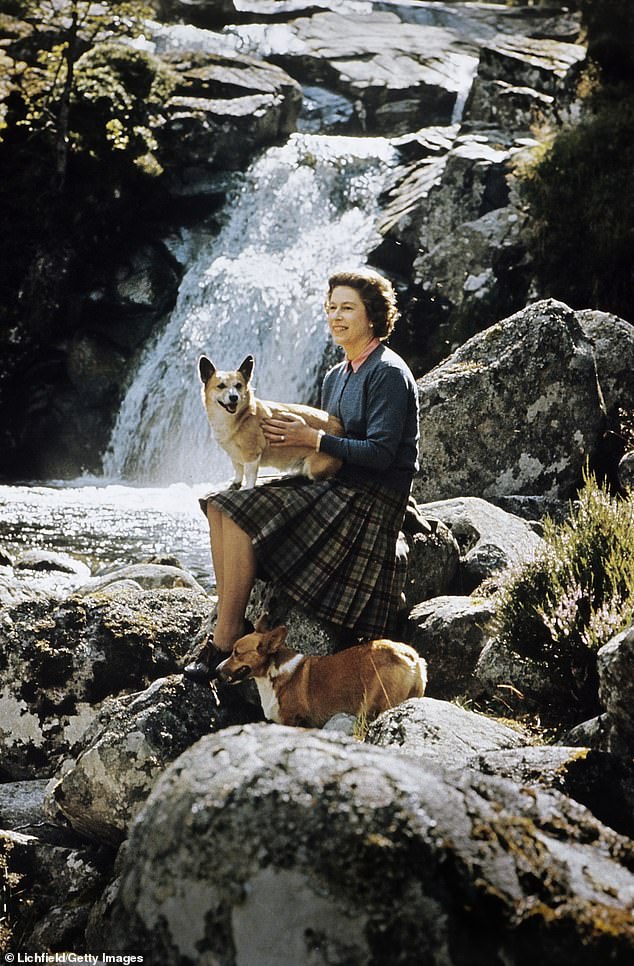 The Queen at Balmoral estate in 1971. Strip away the wealth, the privilege and the palaces, and the bond she has with her dogs is no different from the one the rest of us have with ours

As Lady Pamela Hicks said, ‘The Queen is very private. She longs to be in a room with nobody else. She has few friends and if she had to choose between the dogs, the horses and the friends, there is no doubt which she would choose.’ One of her prime ministers, surrounded by the dogs at his weekly audience, asked her how she could tell the difference between them. ‘Do you get your children confused?’ was the clipped response.

According to former headkeeper Bill Meldrum everyone at Sandringham knows immediately when the Queen arrives because the gundogs alert them. ‘They start barking the moment her car reaches the gate – it’s a good 500 yards from the house. We have no idea how they can tell and they don’t do that with anyone else.’

It is her love of dogs as much as anything else that enables so many of us to feel we have a special connection with the Queen. Strip away the wealth, the privilege and the palaces, and the bond she has with her dogs is no different from the one the rest of us have with ours, no matter what our station in life.

The Queen’s passion for Pooches with pedigree

Susan, the Queen’s first corgi, lived to be almost 15. Willow, the 14th generation of Susan’s descendants and the last of the Queen’s corgis, died in April this year.

Queen Victoria’s dogs were buried in the garden of the residence where they died and Queen Elizabeth has continued this tradition. At Sandringham the pet cemetery is in a corner of the garden, near a boundary wall inset with memorial stones. There are touching tributes to dozens of dogs, both pets and gundogs. 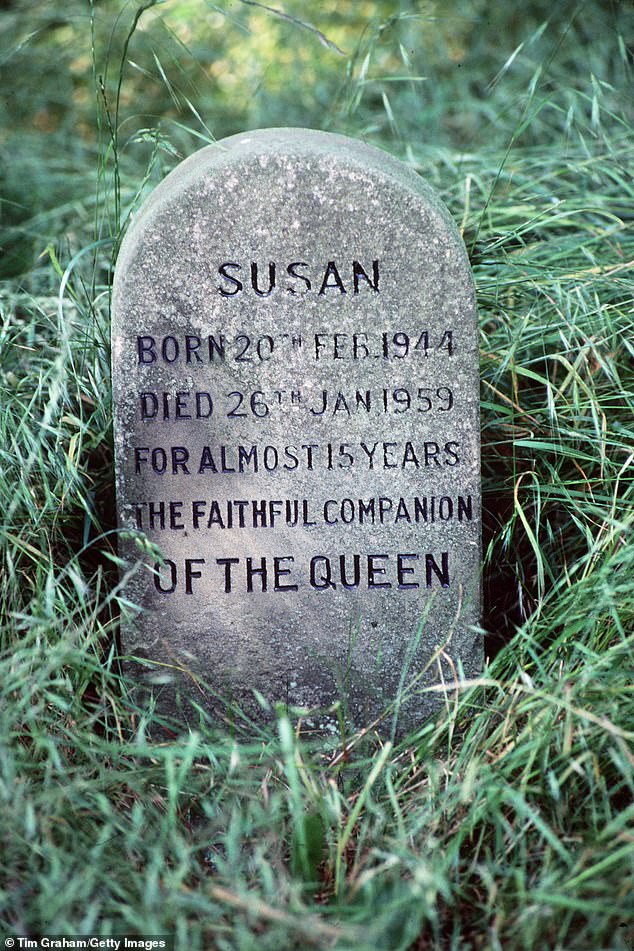 Susan, the Queen’s first corgi, lived to be almost 15. Willow, the 14th generation of Susan’s descendants and the last of the Queen’s corgis, died in April this year

After Susan’s death in 1959, the Queen wrote to her estate manager with instructions for the dog’s burial and drew a sketch of the gravestone and the inscription she wanted carved into it (pictured above). When Susan’s daughter Sugar died in 1965 she was buried alongside her mother with her dates and a similar inscription.

While the corgis’ long reign at Buckingham Palace may have drawn to a close, there is no doubt that dogs will roam around the royal corridors of the future. Neither Prince Charles nor Prince William has ever been without a four-footed friend, although Prince Charles declared at an early age that he preferred labradors to corgis.

And speaking in their engagement interview last year, Prince Harry described how well Meghan had got on with the Queen when they first met, giving a clue to the reason: when he had first introduced Meghan to his grandmother, the dogs had taken to her straight away. ‘I’ve spent the last 33 years being barked at,’ he joked. ‘This one walks in – absolutely nothing…’

‘[The dogs were] just lying on my feet during tea,’ confirmed Meghan. ‘It was very sweet.’