only TWO Afghan translators have been offered sanctuary in the UK

By Larisa Brown and David Williams for the Daily Mail

Afghan interpreters reacted with fury last night when it emerged that only two of them will be given sanctuary under a new policy after officials got their figures wrong.

Gavin Williamson announced in June last year, when he was Defence Secretary, that 50 interpreters and close family would be allowed into the UK as he ripped up old rules.

But an investigation by the Daily Mail has found that policy officials in the Ministry of Defence overestimated the figure and just two meet the new criteria. Only one of those, plus his family members, is in Britain. The second is in the process of coming. The disclosure emerged after officials spent months wading through files, only to discover that there were just a couple of interpreters who would qualify.

Last night translators accused the Government of ‘betrayal’ and ‘broken promises’ after finding out that they did not qualify under the narrow guidelines.

An MoD source said new Defence Secretary Ben Wallace was ‘taking a close look at this issue and is keen to ensure that those who helped us in Afghanistan are treated fairly’.

Dozens who risked their lives beside British forces said their cases had been rejected by UK officials in Kabul, the Afghan capital. 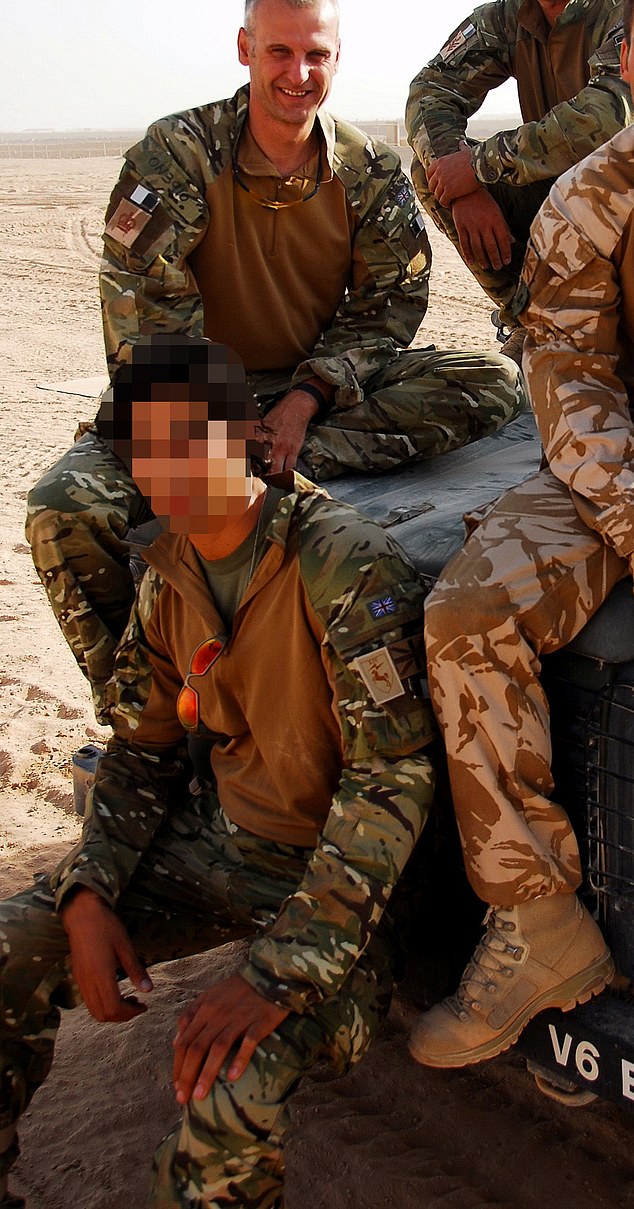 Mr Nawabi, his face obsucred for his safety, was denied entry to the UK after previously being advised to quit being an interpreter for his families safety, disqualifying him for consideration despite previously aiding the British army

Mayar, an interpreter who was rejected, said: ‘It is cruel because we were given false hope by the declaration that 50 of us would be allowed to the UK. Once again we have seen promises broken and dreams shattered. Where are the 50?’

He accused the Government of ‘again letting down interpreters and families who risked everything for the British’. The Mail’s award-winning three-year Betrayal of the Brave campaign has highlighted the cases of dozens of former and current translators who believe they have been ‘abandoned’ to the Taliban by the British. Some interpreters have been murdered.

Under the previous relocation scheme, interpreters had to be serving on an arbitrary date in December 2012 to qualify for sanctuary. They also had to have served in Helmand – the scene of some of the fiercest fighting – for at least a year.

Mr Williamson widened the qualifying period to include those who spent at least a year with British forces as far back as 2006.

Even new rules kept out a hero

Hashmat Nawabi had been serving alongside UK troops in Afghanistan for five years when he was advised by a British officer to resign to spare him and his family from Taliban threats.

It was because the interpreter quit his role – rather than being made redundant – that he has not qualified for sanctuary in Britain under the new policy announced by Gavin Williamson last year.

Speaking from the war-ravaged country, Mr Nawabi, 33, said: ‘Living in Afghanistan with no hope or future is worse than being tortured. We never know what is happening tomorrow. We don’t even know when we go out if we will come back alive or not.’

The father of one, started work with the British in July 2007 and resigned in August 2012 after being told to because of soaring intimidation from the Taliban, which had identified him as a spy for UK forces.

He said he was advised by the British to quit because of the risk to his family and move away from Helmand. He was given £14,000 to relocate his family to northern Afghanistan but they were ‘outed’ as the family of an interpreter.

But the policy only includes interpreters who were made redundant – not those who were forced to quit because of death threats or who were on contracts that ran out.

It is understood Mr Williamson was about to push through another policy change to expand the criteria when he was sacked by Theresa May in May. Under this, interpreters would also have been allowed in if they had quit or were on short-term contracts.

Sources said this would have allowed 70 to come to Britain.

Mayar, 36, worked for three years for UK forces and believed he would qualify under the change of policy because of repeated Taliban threats. But he said: ‘My case was dismissed and I was told that despite the obvious danger I did not qualify… they said my case was “closed”.

He had survived Taliban bullets after driving into an ambush.

Niz, 31, the only translator to have come to the UK with his family under the change of policy, said that while he was ‘very grateful’ to the British many of his ex-colleagues should qualify too.

‘There are many genuine cases where people’s lives are at risk and to delay only increases that risk,’ he said. An MoD spokesman said: ‘We are committed to ensuring that those Afghan interpreter who are eligible for relocation are offered the opportunity to do so. We encourage anyone who experiences intimidation because of their employment by the UK to contact our Intimidation Investigation Unit.’