Facebook accidentally lifted the veil on its major Messenger redesign by publishing the announcement in error ahead of its annual developer conference on Tuesday.

About an hour before F8 was set to kick off, the social media giant posted an update to the Messenger website titled ‘Messenger at F8: Announcing a Faster, Lighter Messenger, Designed to Build Closer Connections.’

The change will see a significant overhaul to Facebook’s main chat app, including an ‘entirely new code base,’ Asha Sharma, director for Messenger consumer product, said in a now-deleted blog post.

Facebook posted an update to the Messenger site titled ‘Messenger at F8: Announcing a Faster, Lighter Messenger, Designed to Build Closer Connections.’ It has since been deleted

WHAT CHANGES ARE COMING TO MESSENGER?

Ahead of F8 on Tuesday, Facebook unveiled some major changes for Messenger, including:

Facebook touted a new initiative called ‘Project Lightspeed,’ which has resulted in Messenger being entirely rebuilt.

As part of the new design, Messenger is now less than 30 megabytes in size, meaning users can download and boot up the app faster than before, resulting in it loading in less than two seconds.

It’s unclear when the lighter version of Messenger will launch, but Sharma said it will take time to roll out.

Additionally, Facebook is rolling out end-to-end encryption in the app that will protect users messages from the prying eyes of governments, as well as the social media giant itself.

In doing so, Facebook is taking a page from WhatsApp, part of its ‘family of apps,’ which has offered encrypted messaging since its inception.

The company said it’s also launching a web browser version of Messenger for both Windows and macOS.

A web version of Messenger is currently being tested and will launch later this year, Facebook said.

Messenger will now feature end-to-end encryption in the app by default, according to the firm.

The move is in line with Facebook’s broader ‘pivot to privacy,’ which was first detailed by CEO Mark Zuckerberg earlier this year. 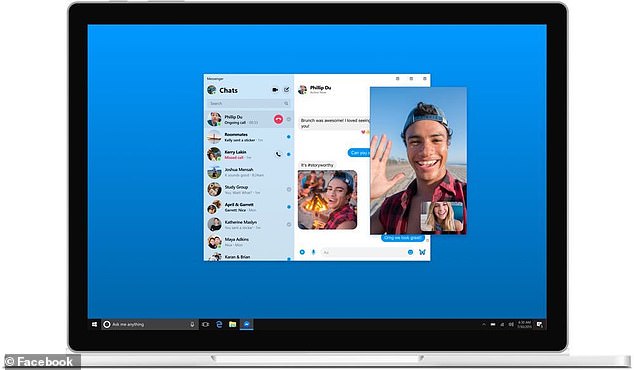 Facebook accidentally revealed its new Messenger app in a blog post on Tuesday. Among the updates are a web-based version for both Mac and Windows users (pictured) 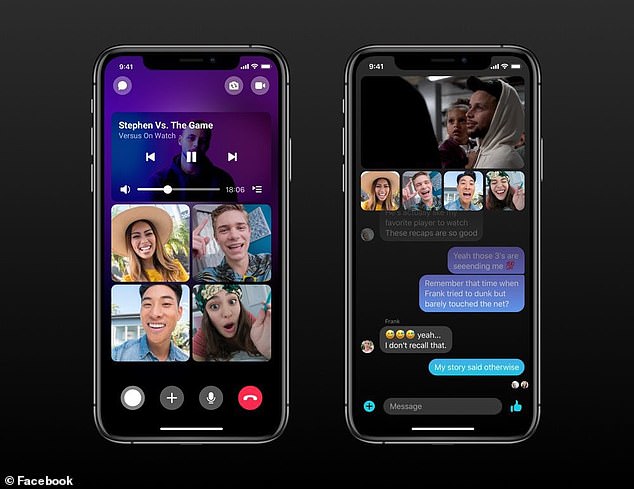 The company also revealed that it’s launching Watch Party for Messenger so that friends can watch shows together in video chats (pictured), along with new ways to connect with others

Chief in the transition is a shift that will allow users to message one another across Instagram, WhatsApp, Messenger and the main Facebook app.

Zuckerberg is expected to reveal more details on his ‘privacy-focused’ vision for the social network during the firm’s annual developer conference today.

The F8 conference kicks off with a keynote at 1 p.m. (ET) Tuesday and will likely bring announcements regarding the firm’s full ‘family’ of apps, including Instagram and WhatsApp, and its latest projects in hardware.

Zuckerberg will also likely do his best to bat away Facebook’s growing array of critics, emboldened regulators and competitors.

The CEO and his lieutenant Sheryl Sandberg have apologized repeatedly over the past year for an array of mishaps over privacy, data misuse and security problems.

Last week, the company said it is setting aside $3 billion to cover a possible fine from the Federal Trade Commission over privacy violations.

Zuckerberg is likely to focus on Facebook’s future by emphasizing private messaging, Facebook’s role in ‘communities,’ and harnessing artificial intelligence to improve discourse.

Tuesday’s keynote is expected to build upon comments made by the CEO last month, in which he promised to crack down on privacy. 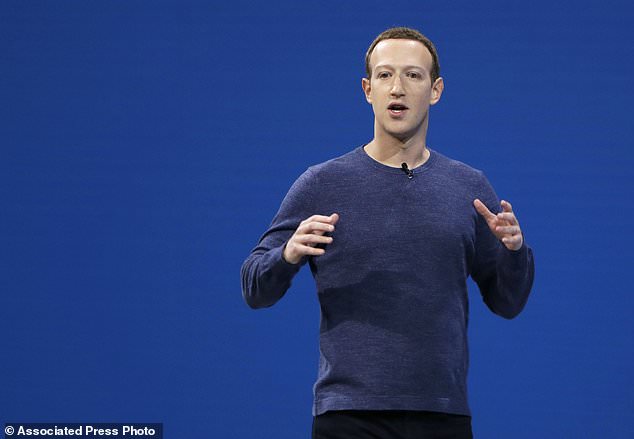 Zuckerberg will kick off Facebook’s annual F8 developer conference Tuesday, April 30, 2019, with what are expected to be more details about his new ‘privacy-focused’ vision for the social network. File photo

In lengthy blog post back in March, Zuckerberg detailed a plan to bring end-to-end encryption to Messenger, WhatsApp, and Instagram messaging services – confirming previous reports that the firm planned to stitch the three together.

The Facebook boss acknowledged the site’s reputation, which has been tarnished in recent years as a result of its lax-approach to the protection of its users’ information, and promised to rebuild its services on the principle of privacy.

Zuckerberg also said he’s working to ensure your online activity won’t come back to haunt you later in life.

Ultimately, the CEO says the firm is striving to make interactions across Facebook ‘a fundamentally more private experience.’

‘I believe the future of communication will increasingly shift to private, encrypted services where people can be confident what they say to each other stays secure and their messages and content won’t stick around forever,’ Zuckerberg wrote in the March 6 post.

‘This is the future I hope we will help bring about.’

Zuckerberg promised end-to-end encryption for all of its messaging services, which will be combined in a way that allows users to communicate across WhatsApp, Instagram Direct, and Facebook Messenger.

This he refers to as ‘interoperability.’

This could mean, for example, that users set messages to auto-delete after a month or even a few minutes.

‘Interoperability’ will ensure messages remain encrypted even when jumping from one messaging service, such as WhatsApp, to another, like Instagram, Zuckerberg says.

Facebook also hopes to improve users’ trust in how it stores their data.

Zuckerberg promised the site ‘won’t store sensitive data in countries with weak records on human rights like privacy and freedom of expression in order to protect data from being improperly accessed.’