Operation Titanic SAS mission no one expected to survive

Six SAS heroes were prepared to sacrifice themselves by spending 40 days behind enemy lines to divert the Germans from the D-Day beaches.

The elite team were the first to set foot on French soil on June 6, 1944, and their mission was so deadly it was codenamed Operation Titanic as they were unlikely to return.

Their remarkable story has now come to light and can be told, after a lucky buyer chanced upon one of their war medals.

The team’s job was to send the Germans on wild goose chases with acts of sabotage and decoy stunts to keep enemy troops away from the Normandy invasion taking place.

Trooper Merryweather, with team leader Norman Poole at the front is in this remarkable picture taken behind enemy lines showing the SAS team and three US paratroopers they met up with post D-Day 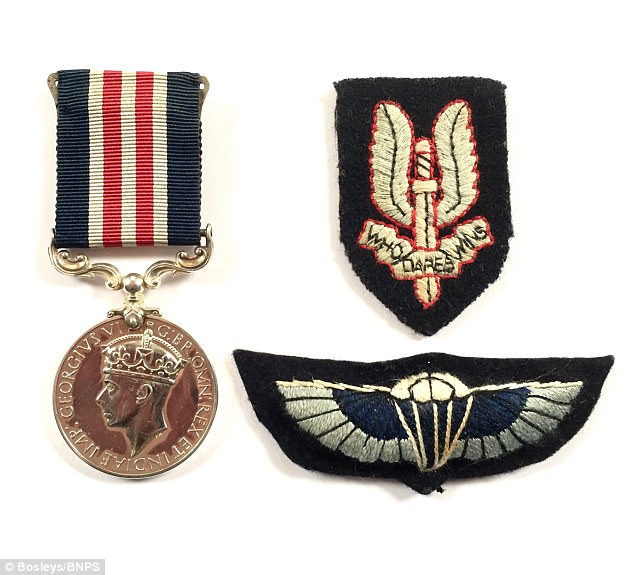 Trooper Merryweather’s MM and SAS badges, which are set to go up for auction

The men expected to link up with advancing American troops after nine days but they spent six weeks on the run 15 miles into German territory.

The party was eventually captured following a Western-style shoot-out at a barn they were holed up in.

One of them, Trooper Anthony Merryweather, was awarded the Military Medal (MM) for his part.

During the mission and acting on information from the French Resistance he went 10 miles to collect two escaped American PoWs and carried one of them back as he was wounded.

Seventy years later a lucky military collector picked up Trooper Merryweather’s MM at an antique fair for next to nothing but didn’t know what it was awarded for.

Bernard Pass, from Bosleys Auctioneers in Marlow, Buckinghamshire, said because of its association with the SAS and D-Day, the decoration is valued at £12,000. It could fetch up to £20,000 when it sells next month.

They dropped alongside puppet parachutists to make the Germans think more men were landing than in reality. 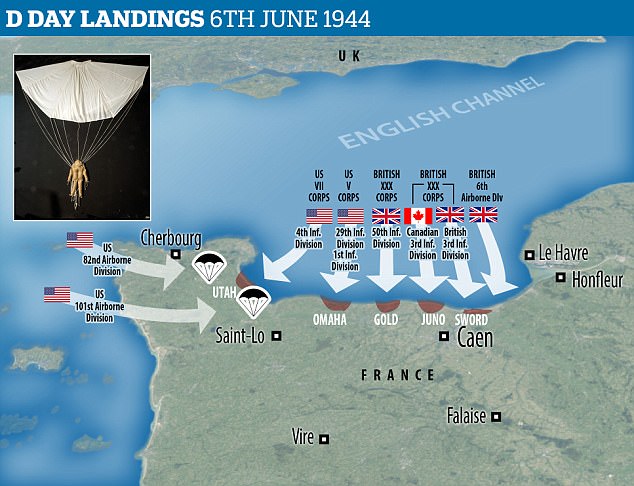 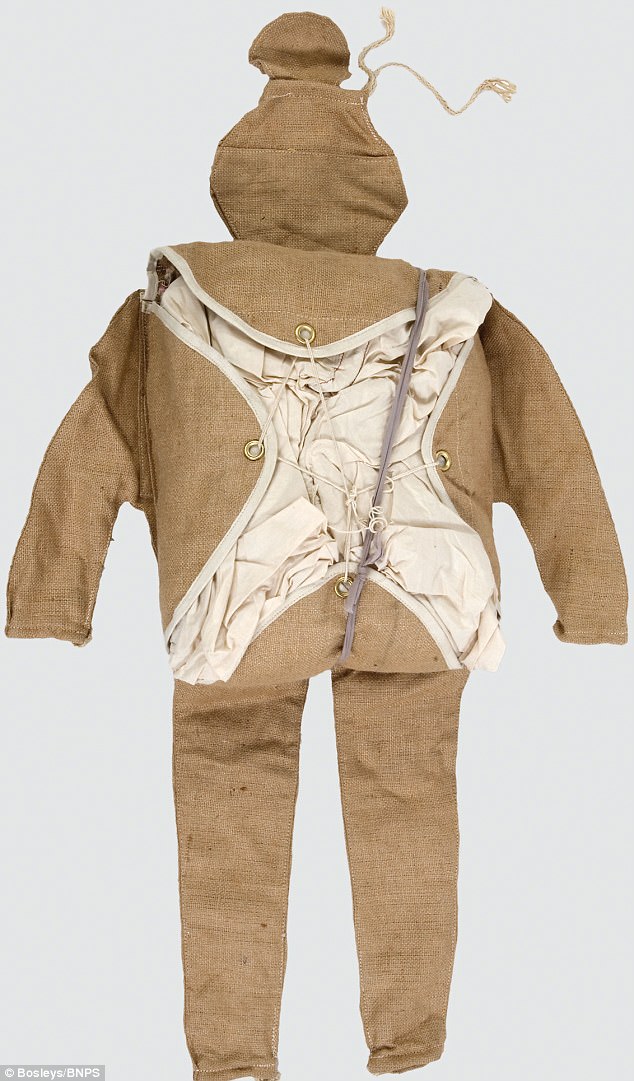 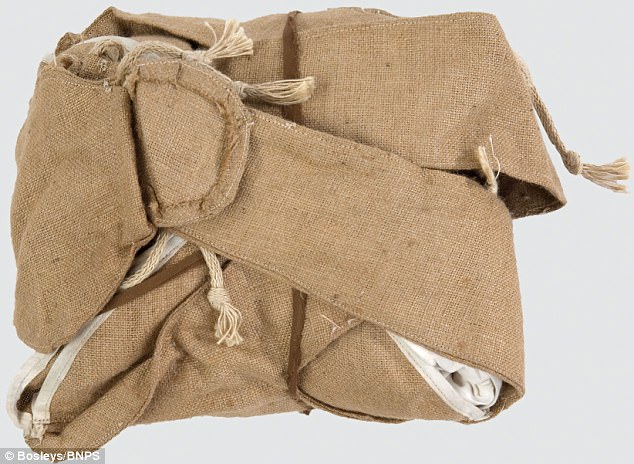 After landing the men activated gramophone speakers to simulate gunfire and set off 20 improvised bombs, all part of the ruse to divert enemy troops away from the beaches.

After a few days the Germans sent a whole company to hunt for the group who could only move position after dark.

They spent the final three weeks living on raw vegetables and broke into a house occupied by sleeping Germans in their hunt for food.

Because the area they operated in was behind enemy lines they also had to face regular shelling from Allied guns.

With the Germans closing in the men decided to make a break for the Allied lines but before they could two enemy paratroopers stumbled upon the barn they were staying in.

The hide out was surrounded and a firefight broke out. Two stick grenades were tossed into the building, wounding four of them, including Trooper Merryweather who suffered shrapnel wounds to his back.

The six Brits gave themselves up, with several of them having to be carried out.

Luckily they were captured by German paratroopers and treated relatively well. Had they been caught by the SS they may have been executed for being saboteurs. 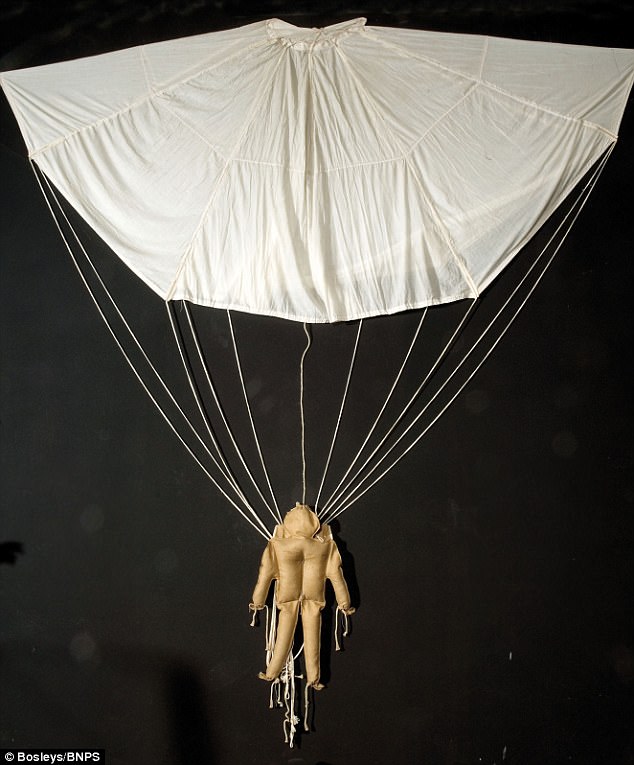 One of the ‘Ruperts’: They dropped alongside puppet parachutists to make the Germans think more men were landing than in reality

Mr Pass said: ‘This Military Medal has come to use from a collector who was in the right place at the right time.

‘As a rule Military Medals are generally worth about £1,000, but if it is connected to a particular campaign then that makes it more desirable.

‘The vendor thought this one might have been for Arnhem, making it worth about £4,000.

‘But when we researched Trooper Merryweather, whose name is on it, then it became clear he was part of this historic D-Day operation.

‘His was the first parachutist team to hit French soil on D-Day. Six men were selected for the mission which was called Operation Titanic, a clear indication it was going to be a one way ticket mission.’

Trooper Merryweather was serving in B Squadron 1st SAS when volunteers were called for the special operation.

They were led by Lieutenant Norman Poole and Lt Frederick Fowles. Troopers Merryweather, Hurst, Dawson and Saunders made up the elite unit.

After being captured on July 17, Trooper Merryweather and Trooper Hurst were sent to a military hospital in northern France which was liberated by the Allies in August 1944.

The medal is being sold on November 1.