Unclaimed bodies are piling up across the US as state and local governments struggle to keep up with payments to the funeral homes that spend thousands to bury them.

A 2004 report estimated that there are 40,000 unclaimed bodies stored in morgues across the US, and experts say that number has risen dramatically in recent years in part due to the opioid crisis.

More than 115 people die from opioid overdoses each day, and the most affected populations are those in lower income groups who are less likely to leave money behind to cover burial costs.

Funeral homes across the US have been overwhelmed by the number of bodies that need to be taken care of as they shoulder the cost and wait for government reimbursement.

Peter Stefan, pictured, is the funeral director at a home in Worcester, Massachusetts, that handles dozens of unclaimed bodies each year. He is pictured in the basement where several of the bodies are stored 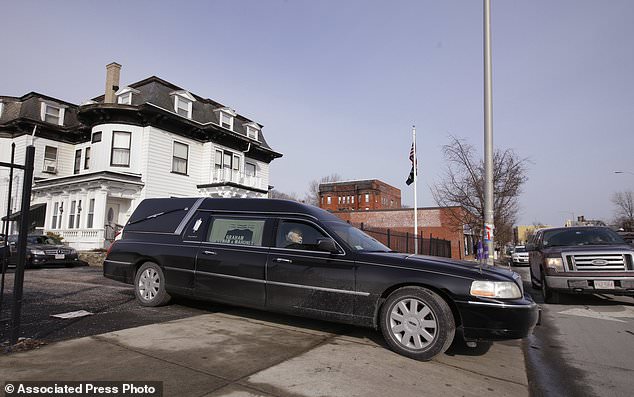 In Massachusetts, funeral directors are paid $1,110 for each unclaimed body buried. The money is intended to cover the cost of labor, the casket, corpse transportation and burial plot

‘What do you do with these people? If I leave this place this way, the poor won’t have too many options.’

In 15 states, the government sets aside money each year to cover the cost of cremating and burying the deceased who left no assets behind. Other states push the financial burden down to the local level.

The number of bodies that require government funding has grown as the opioid epidemic – which claimed the lives of more than 64,000 last year – worsens.

Opiates are now the leading cause of death for adults under 50.

In West Virginia, drug overdose victims have used up nearly all the state government money budgeted for the unclaimed dead.

West Virginia has the highest rate of opioid deaths in the country, accounting for 52 per 100,000.

According to executive director of the state funeral directors association Robert Kimes, homes that bury the indigent and unclaimed from March on will have to try to recoup money from the state later, but there’s no guarantee that they will be paid back.

Lawmakers are considering lowering the payment from $1,250 to $1,000 to make the fund last longer, Kimes said.

In Massachusetts, a dwindling number of funeral homes are willing to shoulder the cost of cremation or burial of unclaimed bodies because the state has failed to keep up with reimbursements.

Funeral directors in the state are reimbursed $1,110 for each unclaimed body buried.

That payment, which is intended to cover the cost of labor, the casket, transportation of the corpse and burial plot, hasn’t risen in 35 years despite an estimated 150 percent inflation rate in that period.

Many funeral directors have said the actual cost of burying an unclaimed body is double what the government pays them.

Cremation is a cheaper option for disposing of unclaimed bodies, but it is only possible if a family member signs off. On average, cremation costs about one third of what burial does. 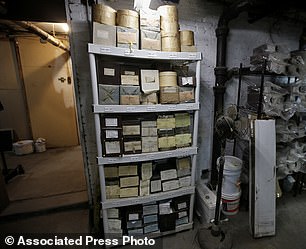 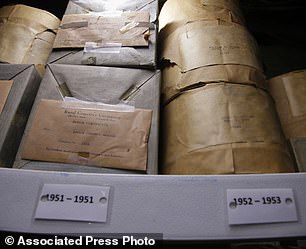 Hundreds of cremated remains of unclaimed bodies are stores in the basement of Stefan’s funeral home, some dating back to the 1800s

He and his supporters, including Democratic state Senate President Harriette Chandler, say they believe it would make more funeral homes willing to help out with abandoned bodies.

Directors recently became eligible for an extra $1,000 if they accept bodies from the Massachusetts medical examiner’s office, which investigates suicides and suspicious and accidental deaths, but that accounts only for some bodies.

Robert Lawler, director of a funeral home in Boston that buries about 100 bodies each year, said:

‘As long as you have two or three funeral homes that are willing to do this, it’s not a problem. But what happens when we decide we can’t do it anymore?’ 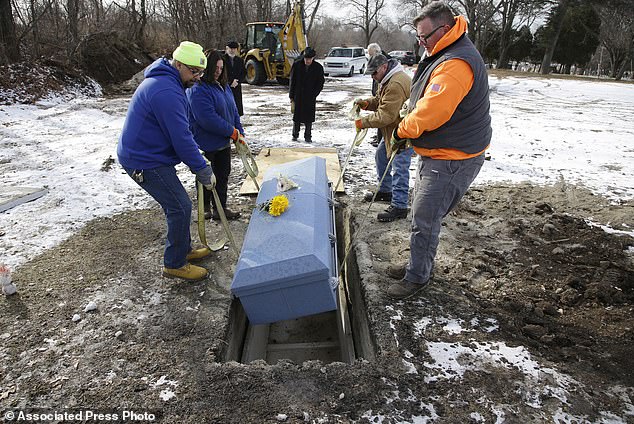 Employees at a funeral home in Massachusetts lower a casket containing the body of James Oram, 82, into the ground.  Oram died in a nursing home and his body was left unclaimed 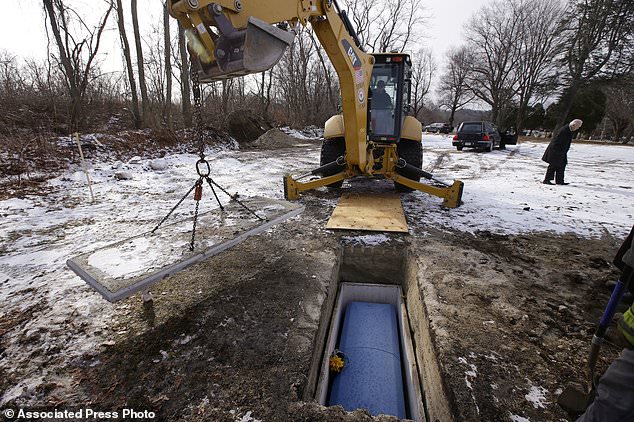 Stefan eventually discovered that Oram died with about $2,000, money that paid for his burial instead of the state

Stefan recounted the details of when a man named James Oram, 82, arrived at his funeral home in Worcester hours after dying at a nursing home in January.

Oram’s body spent about a month in an unfinished basement in a large refrigerator where Stefan can keep three bodies as he looks for relatives, money and burial space. Other bodies are placed in caskets and stored in a room kept cold.

Stefan eventually discovered that Oram died with about $2,000, money that paid for his burial instead of the state.

The basement also holds hundreds of containers of cremated remains that were never picked up by relatives, some of which date to the 1800s.

The state of Ohio used to pay $750 to homes, but has now shifted the burden to local governments.

Today some communities offer a set fee, while some smaller towns often won’t budget for it and funeral directors have to fight to just get paid $350, according to Scott Gilligan, general counsel for the National Funeral Directors Association.

‘A lot of times, they just do it as good citizens,’ Gilligan said.

In Georgia the costs are also handled on the local level.

Last year he had to call five or six funeral homes every time he had an unclaimed body before he could find one willing to bury it for the $1,250 the county provided, he said.

‘I couldn’t blame them because … they’re a business and they have to make money to survive, and here I am asking them to cost themselves money,’ he said.

The county recently passed an ordinance that allows cremation of the unclaimed and pays $750, which Proctor said has made a big impact. 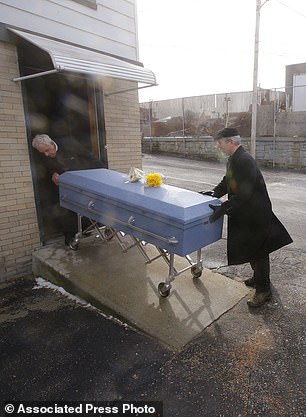 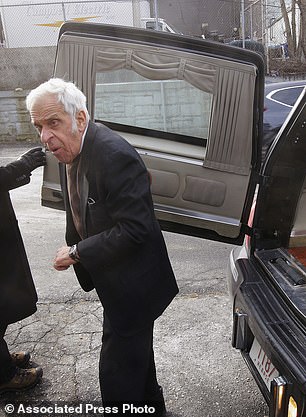 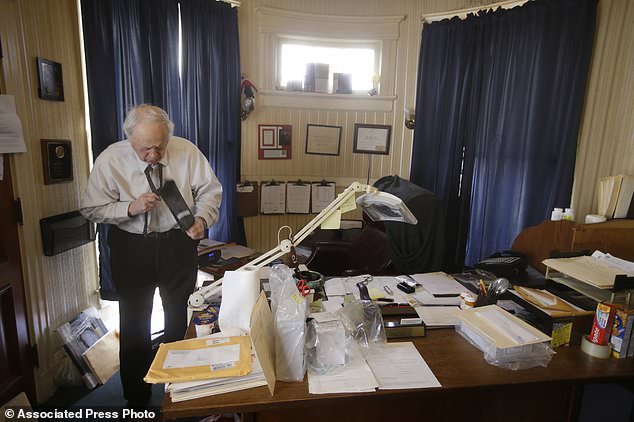 Stefan puts on a tie before heading out to the cemetery for Oram’s burial on February 1, 2018 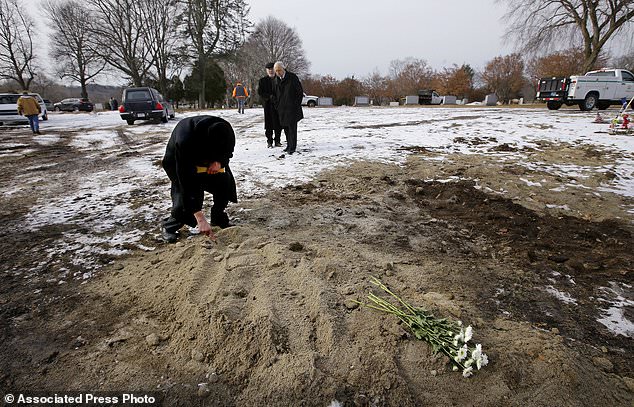 St. Germaine draws a cross in the dirt over Oram’s grave directly after the casket was buried