Asking prices on newly-listed homes for sale increased 0.9 per cent in January, as optimistic sellers hit the market, Rightmove has revealed.

And despite a mortgage crunch having slowed the property market, the number of prospective buyers contacting agents rose 55 per cent compared to the two weeks before Christmas.

The increase is the biggest New Year bounce since 2016, after an extended drop in activity at the end of last year.

However, overall enquiries are down by over a third (36 per cent) compared to the same time last year, according to the report by Rightmove.

In the year to January, house prices increased by 6.3 per cent.

The average asking price for a home in the UK is now £362,438, up 0.9 per cent from December. It also shows a reverse in the downward trend after house prices fell 2.1 per cent between November and December.

Regionally, house prices in the South East increased 0.1 per cent over the past month, while they fell 5.2 per cent in Scotland.

Year-on-year Yorkshire and Humberside saw the biggest increase in the average house price, up 9.5 per cent while the South West saw the lowest growth rate of 3.4 per cent.

For first time buyers the average house price only increased 3.9 per cent in the 12 months to January and 0.4 per cent since December, taking the figure to £222,582. 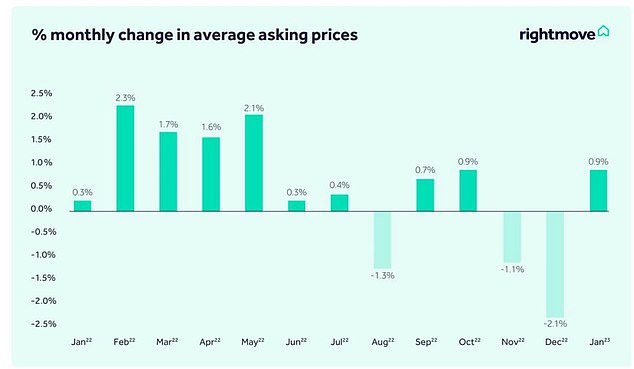 January saw a rise in house prices month-on-month after a dip of 2.1% in December

Tim Bannister, Rightmove’s director of property science, said ‘The seasonal increase in new seller asking prices this January from December is particularly encouraging for movers who are looking for the reassurance of familiar trends and a calmer, more measured market after the rapidly changing and at times chaotic economic climate of the final few months of last year.

A drop in your asking price is likely not an actual loss compared with what you paid for it, only a failure to live up to aspirations

‘However, while average asking prices did rise in January, they are still £8,720 less than their peak in October.

It will be important for the vast majority of sellers to remember that a drop in your asking price is likely not an actual loss compared with what you paid for it, only a failure to live up to aspirations.

‘Listening to your estate agent’s advice about your hyper-local market and pricing right the first time can avoid a stale sale and the need for even greater reductions later.’

There is also good news as monthly mortgage payments for first time buyers fell as mortgage rates continue to soften from the highs seen in October last year.

The average two-year fixed rate is now 5.63, down from 5.79 on 1 January, according to Moneyfacts.

The five-year fixed rate average has also fallen, dropping to 5.43 from 5.63 at the start of the month.

Most experts now expect rates to settle somewhere between 4 and five per cent this year, with many fixed deals now below 5 per cent despite a succession of base rate increases.

This is Money’s best mortgage rates calculator can show you the deals you could apply for and what they would cost. 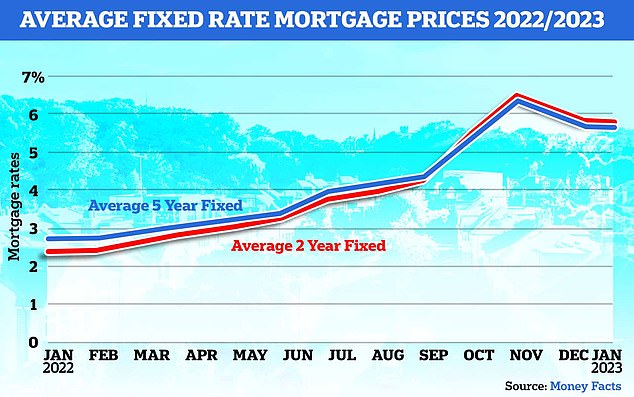 Up and down: Mortgage rates rose rapidly in the wake of the mini-Budget in September but are expected to flatten out this year

However, data from Nationwide last week revealed that first-time buyer homes are the least affordable they have been since 2008, as mortgage payments eat up 39 per cent of borrower’s salary.

Gareth Overton, head of residential sales at estate agent Henry Adam, said: ‘People are now looking ahead and putting their moving plans into action for the new year.

‘As mortgage rates start to lower and inflation moves under control, we’re seeing an uptick in demand from those who’ve taken a long-term view to investing in their next home.

‘Along with increases in viewing levels seen so far in 2023, we’re also receiving more requests for valuations. This bodes well for a reasonably balanced market in the months ahead, where supply and demand are more evenly matched.’