Orangutan is found blinded and riddled with 24 air rifle pellets

An orangutan found blind and riddled with 24 air rifle pellets is in a stable condition today after a team of vets removed three of them from his head.

The male orangutan, named Paguh by his rescuers, was found with 16 metal pellets in his skull and eight in his body in Aceh, Indonesia last week.

The wounded ape was transported to an orangutan rehabilitation centre in North Sumatra, where vets tried to remove all of the remaining shrapnel.

His rescuers suspect he was maimed by poachers.

A handout photo from the orangutan’s rescuers shows Paguh receiving medical attention at a reintroduction and quarantine station in North Sumatra, Indonesia last week. The ape was found riddled with air rifle pellets but is now in a stable condition after vets removed three from his head 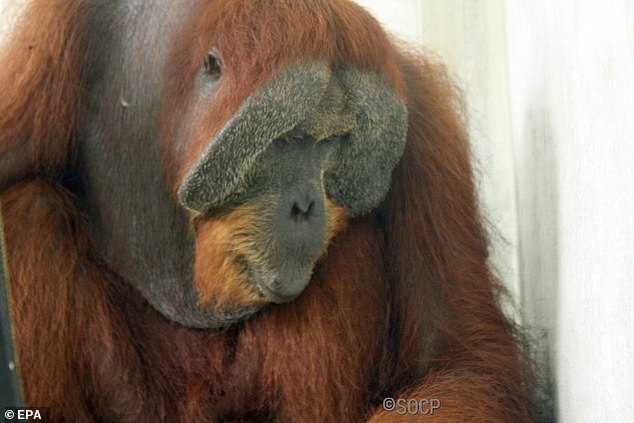 Paguh can be seen on 20 November after receiving treatment at the Sumatran Orangutan Conservation Programme’s (SOCP) reintroduction and quarantine station in North Sumatra, Indonesia

One of the vets said there were 16 pellets wedged in Paguh’s cranium, four in his arms and legs, three in his hip and one in his gut.

According to Castri Delfi Saragih, communications officer at the Sumatran Orangutan Conservation Programme, vets were only able to remove three pellets, leaving him with 13 still lodged in his head.

‘Paguh is currently in a stable condition after the veterinary team removed three pellets from his head,’ Castri told the Jakarta Post today.

During their examination of Paguh, the team of vets discovered that the ape was completely blind and feared risking further damage if they tried to remove all the shot from his head. 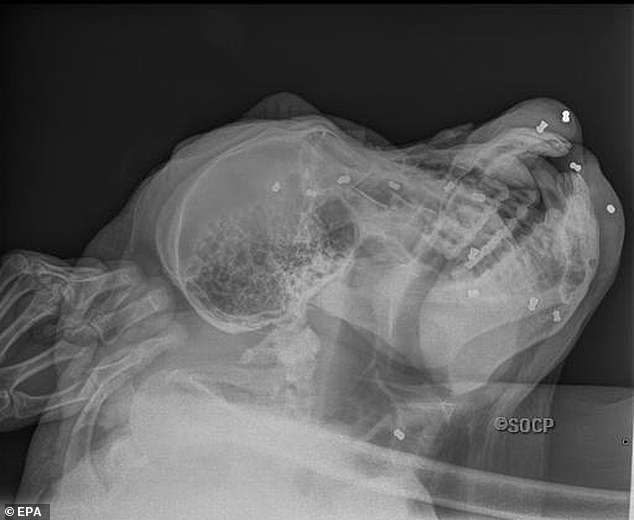 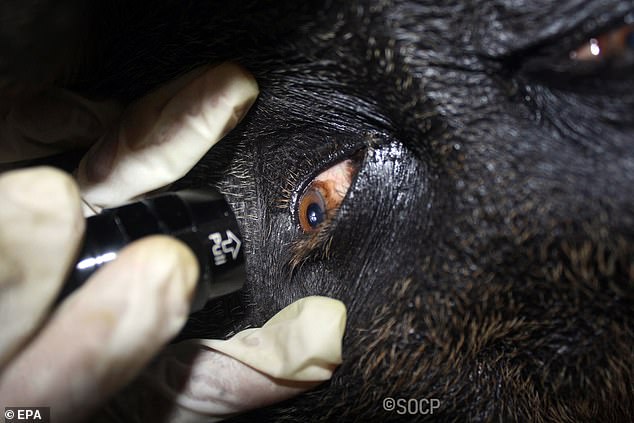 A handout photo from 20 November shows a member of the vet team inspecting Paguh’s eyes in North Sumatra, Indonesia. On examination, the team discovered that the orangutan was completely blind in both eyes

The conservation agency treated a female orangutan in March for 74 air rifle pellets lodged under her skin.

They managed to remove 10 of them and she survived.

However, an orangutan treated for pellet wounds in 2015 died after being transported to a rehabilitation centre in north Sumatra.

The shooting of an orangutan carries a prison sentence of up to five years and a fine of almost £5,500. Conservation agencies are concerned that authorities are not doing enough to ensure that air rifle laws are being adhered to.