Orangutans have their own ‘languages’ that have been shaped by social mingling just like humans, a new study reveals.

Researchers have studied the vocal calls of wild orangutans – one of the four types of great apes – in Borneo and Sumatra, Southeast Asia.

The critically endangered creatures have distinct ‘vocal personalities’ that depend on the social groups in which they live and communicate, the experts found.

Previously, it was thought the animals interacted using a fixed repertoire of instinctive, automated calls – but the new research suggests this isn’t the case.

Social mingling shapes and transforms the ‘vocabularies’ of apes, just like in humans, according to the new research. Pictured, female orangutan at Sumatra, Asia

There are four living classifications of great apes or ‘Hominidae’ – Orangutan, Gorilla, Pan (consisting of chimpanzee and the bonobo) and Homo, of which only modern humans remain.

There are four genera of great apes:

– Gorilla (the eastern and western gorilla)

– Pan (the chimpanzee and the bonobo)

– Homo (of which only modern humans remain)

Compared to other apes, orangutans don’t make much noise, and they generally journey through the forest alone.

Orangutans were the first species to diverge from the great ape lineage but are the only great ape which uses the vowel and consonant like sounds in a complex way – giving a parallel with human speech.

The study was led by Dr Adriano R. Lameira, an assistant professor at the University of Warwick’s Department of Psychology.

‘Great apes, both in the wild and captivity, are finally helping us to resolve one of the longest-standing puzzles in science – the origin and evolution of language,’ he said.

‘We can now start conceiving of a gradual path that likely led to the rise of the talking ape, us, instead of having to attribute our unique verbal skills and advanced cognition to divine intervention or random genetic jackpot.’ 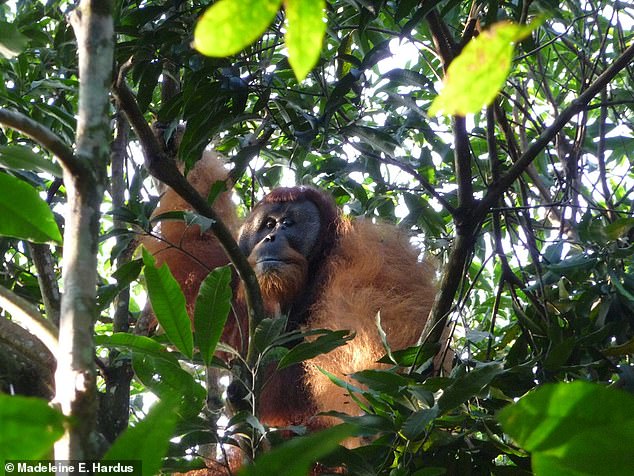 There are three species of orangutan – the Bornean, the Sumatran and the more recently confirmed new species, the Tapanuli. Pictured, a Sumatran male orangutan 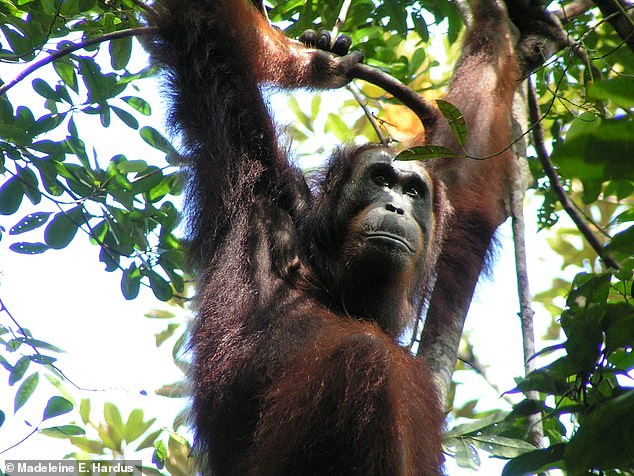 The orangutans are critically endangered great apes that are only found in the wild on the islands of Borneo and Sumatra. Pictured, Bornean female

Orangutans are great apes, as opposed to monkeys, and are closely related to humans, having 97% of DNA in common.

Orangutans are extremely patient and intelligent mammals. They are very observant and inquisitive, and there are many stories of orangutans escaping from zoos after having watched their keepers unlock and lock doors.

For the study, Dr Lameira and his research team recorded the calls of 76 individual orangutans across six populations in the swamps and low rainforests of Borneo and Sumatra in Southeast Asia.

The islands of Borneo and Sumatra are the only locations in the world where orangutans exist.

Researchers found that the orangutan populations differed naturally in population density, from groups that socialised intensely to those that were more dispersed.

In high-density populations, the orangutans communicated using a large variety of original calls, trying out lots of novel sound variants that were continually modified or dropped.

While the more dispersed groups did not experiment with such a huge number of novel sounds, when they did introduce a new call variant, they kept it.

Conversely, the orangutans in high-density populations was heard to continuously discard new call variants that they’d come up with.

‘Low density populations are not very varied in their signal choices, but they have a relatively rich set of choices,’ Dr Lameira told MailOnline.

‘High density populations are more cacophonic; there is wild variation in their call variants, but very original call variants and quickly lost and never produced again, which ultimately leaves individuals with a relative impoverished base set of calls that they use consistently.’

Humans and orangutans share approximately 97 per cent of their DNA, according to past research.

If orangutan call communication is affected by social circumstances, then this was also likely the case with our direct ancestors, such as Homo erectus.

Social influence could have increased steadily, ultimately leading to the multiple ways in which human language is determined by people who surround us, as seen today.

‘Many more clues await us in the lives of our closest living relatives, as long as we manage to guarantee their protection and their preservation in the wild,’ Dr Lameira said.

‘Each disappearing population will take with it unretrievable glimpses of the evolutionary history of our species.’

The study has been published today in Nature Ecology and Evolution.