Scientists at the University of Exeter used drones to film the animals – one of the world’s most powerful predators – in the Pacific Ocean.

The team found killer whales (Orcinus orca) spend more time interacting with certain individuals in their pod, and tend to favour those of the same sex and similar age.

Results from the new study are based on 651 minutes of video filmed over 10 days.

Orcas are the largest member of the dolphin family. While they are most abundant in colder waters like Antarctica, Norway, and Alaska, they are also found in tropical and subtropical waters

The study, led by the University of Exeter and the Center for Whale Research (CWR), also found that the whales become less socially connected as they get older.

Orcas are one of the most recognisable marine mammals, with their distinctive black and white bodies.

‘Until now, research on killer whale social networks has relied on seeing the whales when they surface, and recording which whales are together,’ said lead author Dr Michael Weiss, of the University of Exeter.

‘However, because resident killer whales stay in the social groups into which they’re born, how closely related whales are seemed to be the only thing that explained their social structure.

‘Looking down into the water from a drone allowed us to see details such as contact between individual whales. 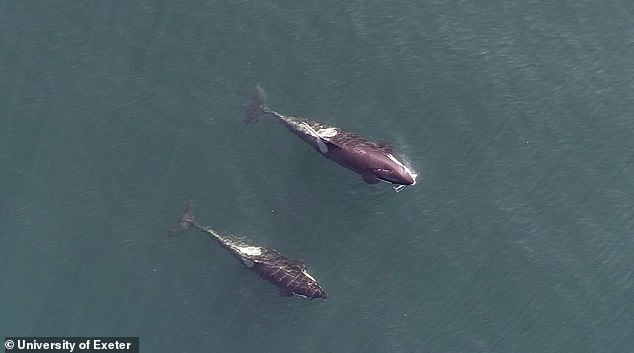 Orcas (killer whales) are one of the most recognisable marine mammals, with their distinctive black and white bodies

Orcas are the only natural predator of the great white.

Scientists have found proof that they are gashing the sharks open and eating their fatty livers.

Scientists speculate this behaviour may be behind the disappearance of great whites from the waters of False Bay, off of the coast of Cape Town.

Great whites frequented the area between the months of June to October every year as part of their annual winter hunting season.

They were drawn to the region by the presence of the so-called Seal Island, a rock home to a huge seal colony.

However, they have themselves fallen pray to orcas — and are on the retreat.

‘Our findings show that, even within these tight-knit groups, whales prefer to interact with specific individuals.

‘It’s like when your mum takes you to a party as a kid – you didn’t choose the party, but you can still choose who to hang out with once you’re there.’

Patterns of physical contact – one of the social interactions the study measured –suggest that younger whales and females play a central social role in the group. The older the whale, the less central they became.

The new research built on more than four decades of data collected by CWR on southern resident killer whales, a critically endangered population in the Pacific Ocean.

‘This study would not have been possible without the amazing work done by CWR,’ said Professor Darren Croft, of Exeter’s Centre for Research in Animal Behaviour.

‘By adding drones to our toolkit, we have been able to dive into the social lives of these animals as never before.

‘We were amazed to see how much contact there is between whales – how tactile they are.

‘In many species, including humans, physical contact tends to be a soothing, stress-relieving activity that reinforces social connection.

‘We also examined occasions when whales surfaced together – as acting in unison is a sign of social ties in many species.’

The results, published in the journal Proceedings of the Royal Society B, show killer whales exhibit interesting parallels in social bond formation and social life histories with primates, including humans. 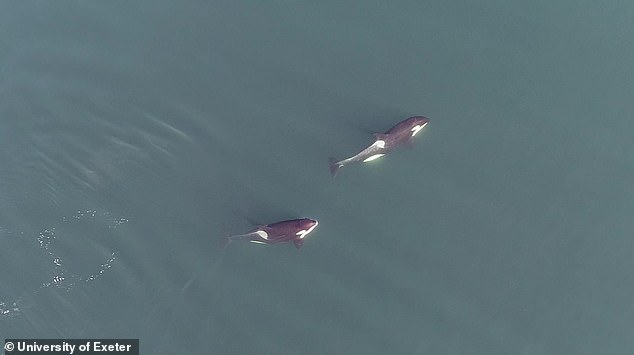 Orcas are the largest member of the dolphin family and have a wide range – they’re found in every single ocean on Earth.

They’re technically a species of dolphin but will hunt other types of dolphin for food, as well as fish, seals and sea lions, sharks, large whales, cephalopods (octopods and squids), seabirds and more.

They are apex predators that have been known to eat most animals, including large sharks. Highly intelligent and social creatures, they work as a pack to hunt and kill their prey depending on its size.

WHAT ARE KILLER WHALES?

Killer whales are ‘toothed’ whales, with true teeth rather than fibrous plates for filter-feeding.

Usually black and white, in Antarctic waters their skins are covered with a film of plankton called diatoms, which gives them a brownish and yellowish hue.

Orcas are born into a family group and remain with that group for the rest of their lives and form very highly co-ordinated hunting packs.

They catch single prey ranging from dolphins, porpoises and even whales including the blue whale.

Orca whales are found almost everywhere throughout the earth’s oceans.

They are common in Antarctic waters, with a population estimated at about 70,000.