Orient Express to launch a stunning 721ft cruise ship in 2026, with two pools and a recording studio

It looks like it’s on track to be an incredible experience.

One hundred and forty years after the debut of its first luxury trains, Orient Express is launching its first cruise ship, inspired by the golden age of the French Riviera.

Promising to be an ‘extraordinary sailing yacht of the future’ with ‘spectacular’ interiors, the glittering features on board include two swimming pools, a speakeasy bar and a private recording studio.

The Orient Express is launching its first-ever cruise ship – Orient Express Silenseas, a luxury vessel that’s inspired by the golden age of the French Riviera

The luxury train brand traces its roots back to the seas, a statement reveals. It says that in 1867, Orient Express founder Georges Nagelmackers sailed to the U.S on transatlantic ships and was ‘fascinated by the grandeur’ of these huge boats.

After exploring the luxurious travellers’ suites and experiencing the social scene in the restaurants and the ambience of the lounges, libraries and entertainment venues, he was inspired to launch the Orient Express train in 1883.

This new chapter in the history of Orient Express sees the ‘legendary train head out to sea’ in a partnership between the French hospitality brand Accor and the French shipbuilding company Chantiers de l’Atlantique.

A statement reveals: ‘Orient Express Silenseas will echo the glorious era when writers, artists, painters, princesses and movie stars spent time between Monte-Carlo, the beaches of Saint-Tropez, Cap d’Antibes, Cannes and its famous Croisette and discovered a refinement tinged with exquisite insouciance and joie de vivre, inviting them to extreme escapades.’ 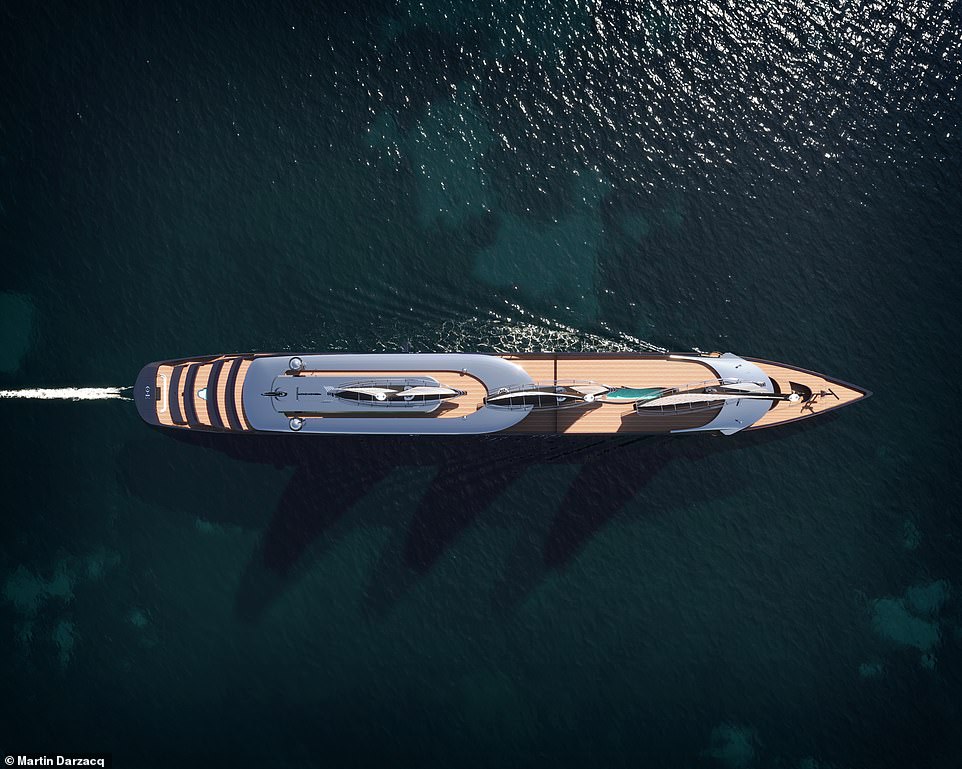 The glittering features on board the ship, which launches in 2026, include two swimming pools, a speakeasy bar and a private recording studio

The two swimming pools on board include a lap pool, and post-swim, passengers can retreat to the ship’s two restaurants for a night of fine dining.

‘Incredible’ evening entertainment will take place in the Amphitheatre-Cabaret, while it’s said the recording studio will ‘give a voice to the most beautiful melodies’.

Days can be spent enjoying spa treatments, meditation sessions and excursions that invite you to ‘discover cultural treasures that allow guests to completely unplug from reality’.

The statement adds: ‘The singular cruise ship will celebrate the art of travel a la Orient Express: the quintessence of luxury, absolute comfort and dreams.’

Described as a ‘true sailing yacht of the future’, the vessel’s interior will be designed by the architect Maxime d’Angeac while French design company Stirling Design International will handle the exterior architecture. 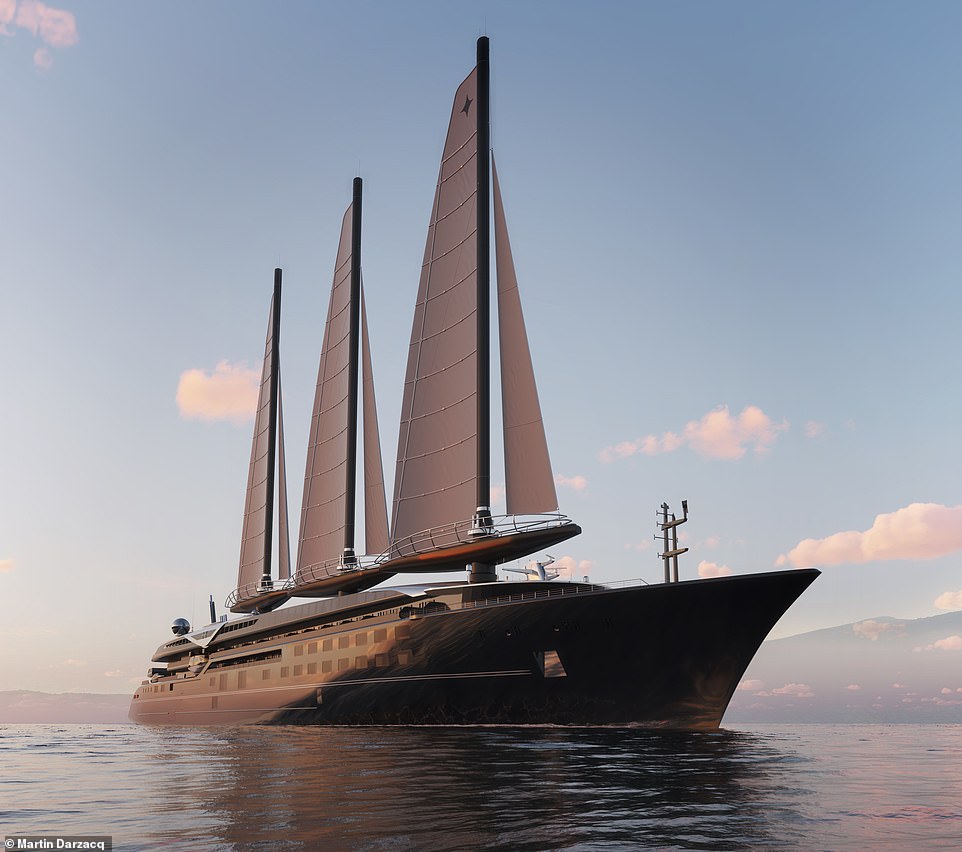 The vessel will sail with a technological design known as ‘SolidSail’. Three rigid sails with a surface area of 1,500 metres (4,921ft) each will be hoisted on a rig, with three tilting masts reaching more than 100 metres (328ft) high, ensuring up to 100 per cent of the propulsion in suitable weather conditions.

This hybrid propulsion formula will combine wind power with an engine that runs on liquefied natural gas (LNG) and plans to use green hydrogen once the technology is approved for ocean passenger ships, a statement notes.

Sebastien Bazin, Chairman and CEO, Accor, said: ‘With Orient Express Silenseas, we are beginning a new chapter in our history, taking the experience and excellence of luxury travel and transposing it onto the world’s most beautiful seas. This exceptional sailing yacht, with roots in Orient Express’ history, will offer unparalleled service and refined design spaces, reminiscent of the golden age of mythical cruises. Innovation is at the heart of this ultra-modern ship that will revolutionize the maritime world with new technology to meet today’s sustainability challenges. It is a boat designed to make dreams a reality, a showcase for the best of French savoir-faire.’ 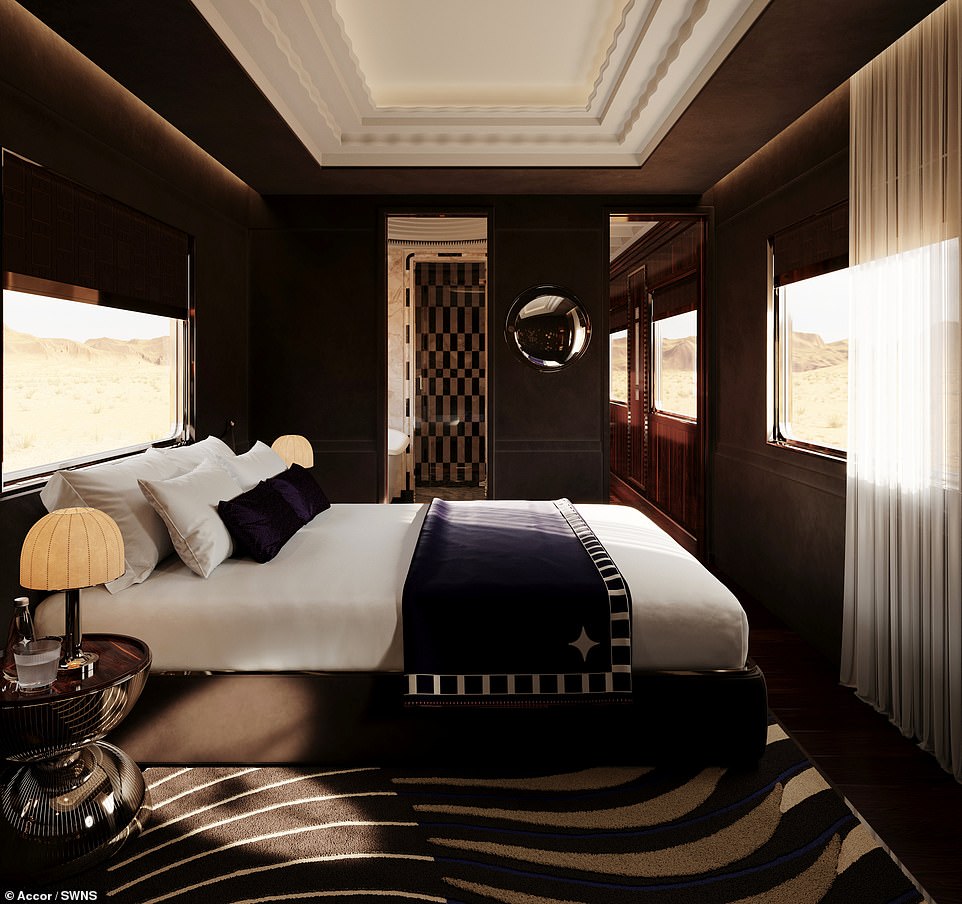 French firm Accor is restoring 17 original Orient Express cars, formerly known as ‘Nostalgie-Istanbul-Orient-Express’. Above is a rendering of the newly-unveiled Presidential Suite that will occupy one of the carriages 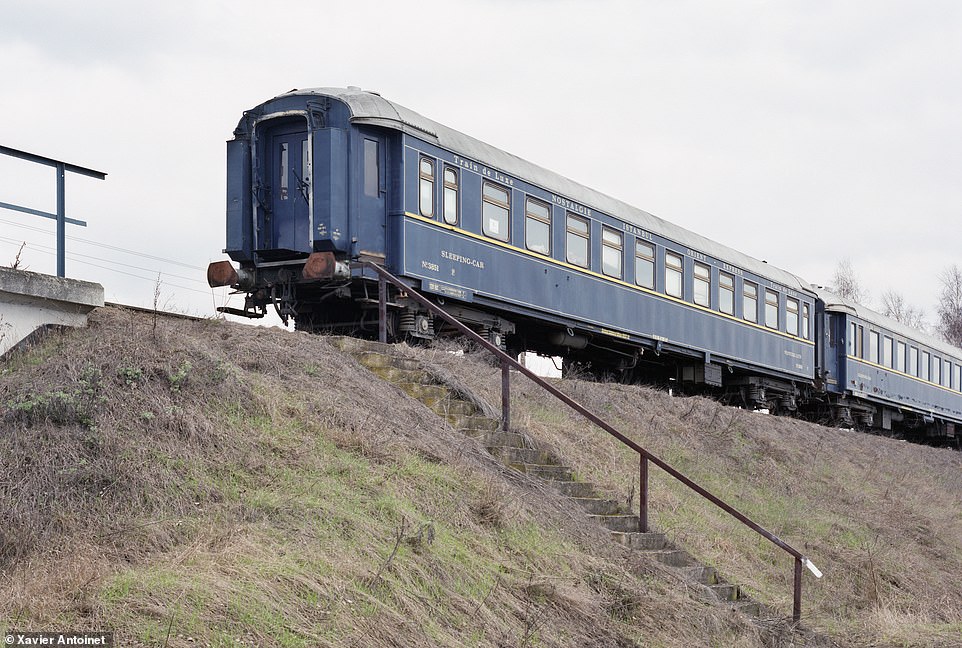 The ‘Nostalgie-Istanbul-Orient-Express’ carriages date from the 1920s to 1930s, with a new service due to launch in Paris in 2024

Laurent Castaing, Managing Director, Chantiers de l’Atlantique, said: ‘With a signed letter of intent to order two ships, Chantiers de l’Atlantique is proud to herald a new era in the shipbuilding industry with Silenseas. This concept, born in our design offices in 2018, is the quintessence of our savoir-faire in the fields of naval architecture, the construction of sophisticated hulls, as well as the design of luxurious spaces.’

The announcement comes after beautiful designs were unveiled for the re-imagined interiors of an Orient Express train being restored to its former glory by Accor, with a new service due to launch in Paris in 2024. The 17 original Orient Express carriages – formerly known as ‘Nostalgie-Istanbul-Orient-Express’ – date from the 1920s to 1930s.

When it launches, it won’t be the only Orient Express train whisking passengers around Europe – the Venice Simplon-Orient-Express has been running various routes since 1982, and the Orient Express La Dolce Vita is due to launch in early 2024, journeying through Italy and further afield to Paris and Istanbul.