These are the pictures of three adorable endangered bear cubs who have been orphaned after they lost their mother.

The Syrian brown bears, also known as Ursus arctos syriacus, have been left at a rescue centre after they separated from her at a forestry area in the northeastern region of Turkey.

Under the supervision of a caretaker at the Celal Acar Wildlife Rescue and Rehabilitation Centre, the cubs were brought in to receive their treatment – and have been making excellent progress ever since.

The little creatures are seen enjoying sunny weather as they lark around in the open air at the rescue based in the Karacabey district of Bursa. 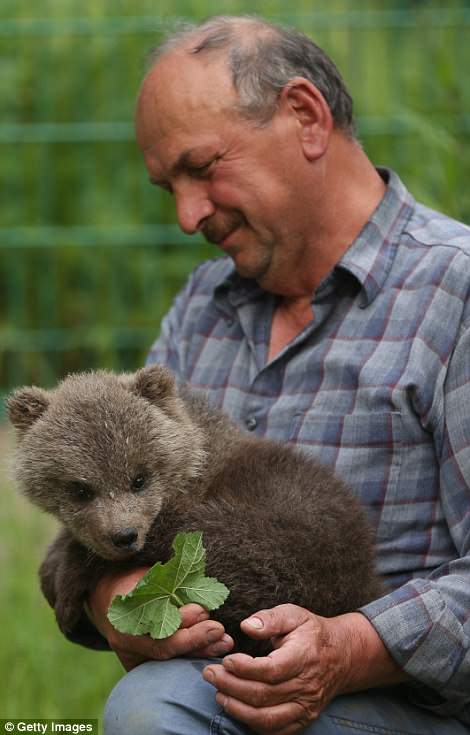 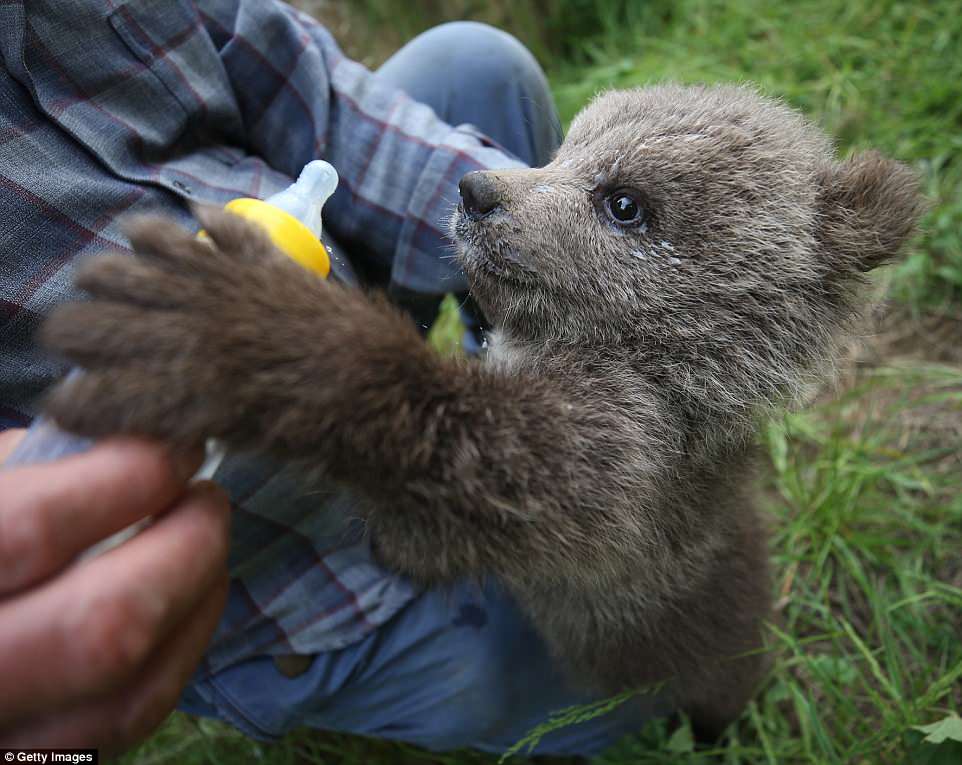 Under the supervision of caring staff at the Turkish centre, the three cubs are starting to make excellent progress, with one seen drinking milk from a bottle 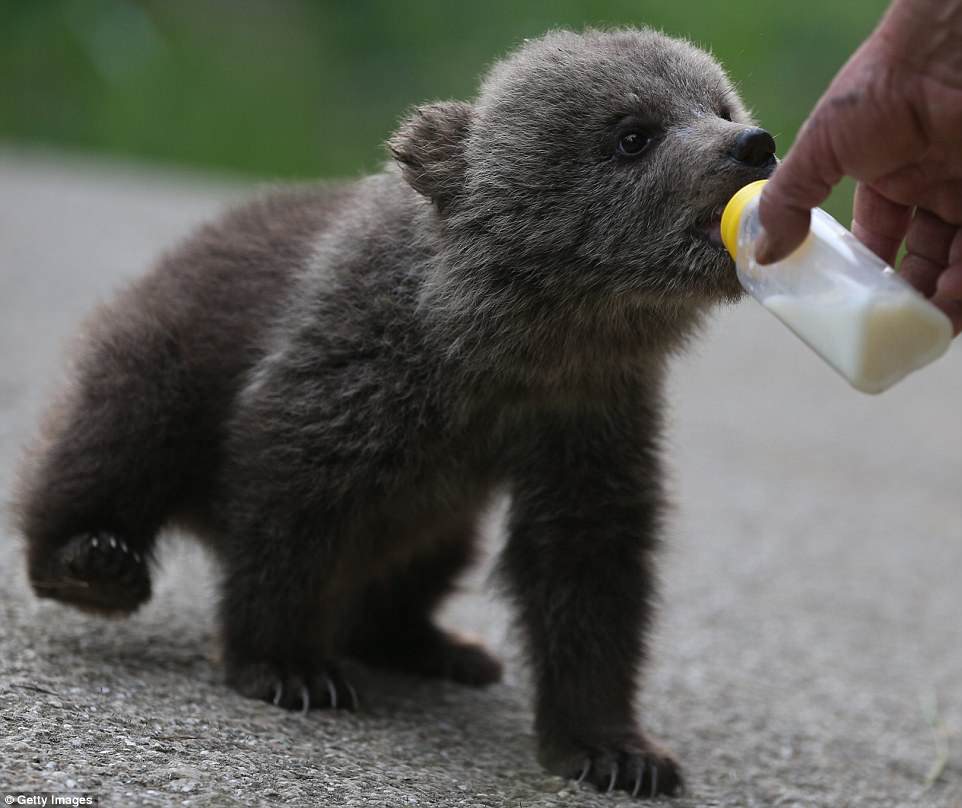 The cubs were seen inspecting all the rocks and trees in the area.

And to fuel them for hours of exploring, they feasted on a nice meal of apples and milk being fed through a bottle.

According to local media, Syrian brown bears are relatively rare.

The species is native to mountainous areas in the Near East in countries such as Syria, Lebanon, Turkey and Iran. 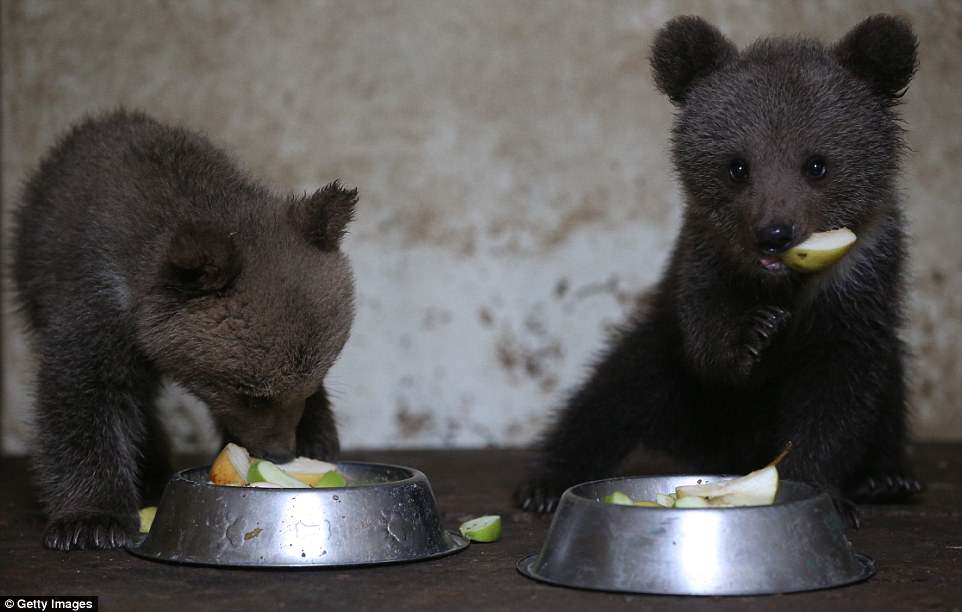 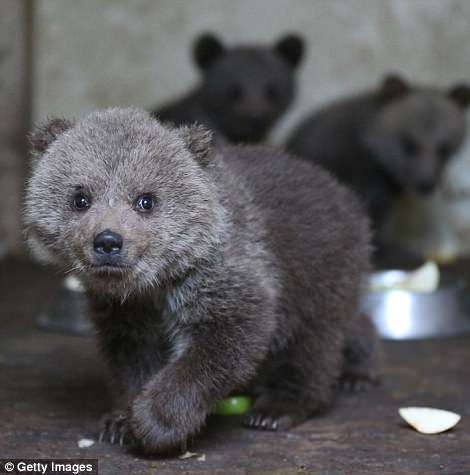 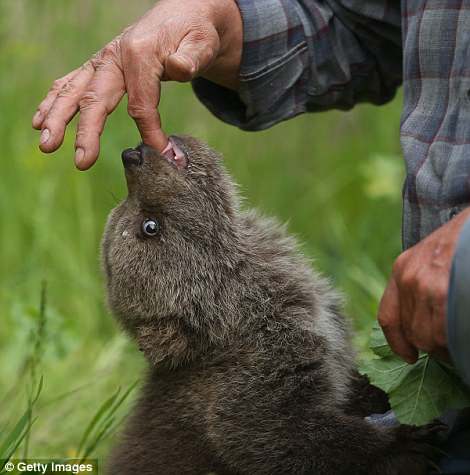 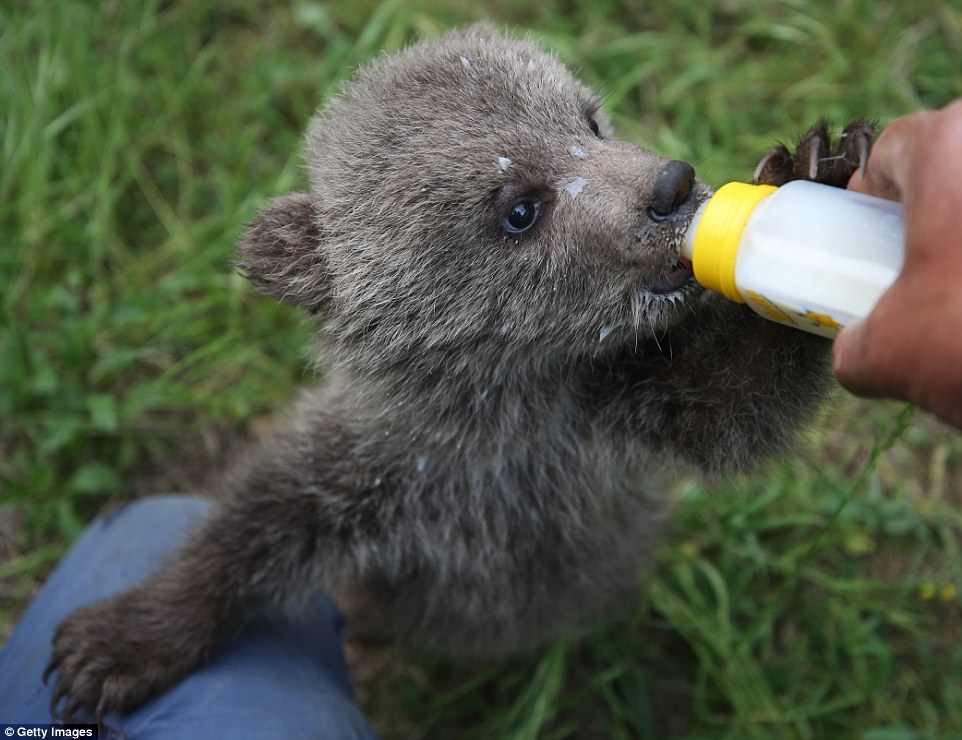 A caretaker feeds a bear cub from a bottle, where it manages to splatter milk  over its face

The bears are also found in the high forests of the Caucasus mountain range which straddles Georgia, Armenia, Azerbaijan and Russia.

The small subspecies of the brown bear is however threatened by deforestation and poaching.

The Syrian brown bear is said to have been first mentioned in the Bible, which cited the protectiveness of a mother bear towards her cubs proverbially three times.

A Syrian brown bear was also famously used by Allied troops in World War II as a mascot.

Bear Wojtek served in the 2nd Polish Corps at the bloody Battle of Monte Casino in Italy in 1944.

Wojtek helped the Polish soldiers to move crates of ammunition and became a huge celebrity among Allied top commanders who all wanted a picture with him. 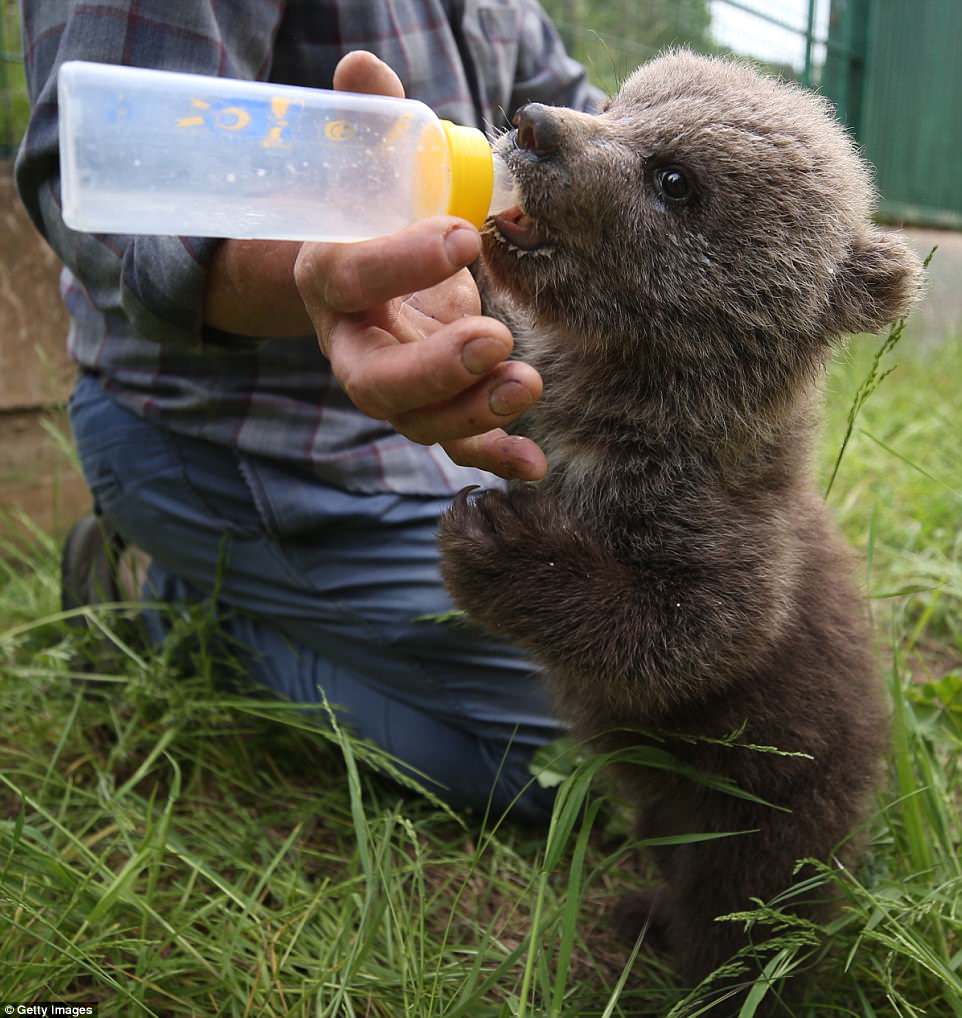 Feeding time for this little one:  The cute young cub takes a big swig from its bottle 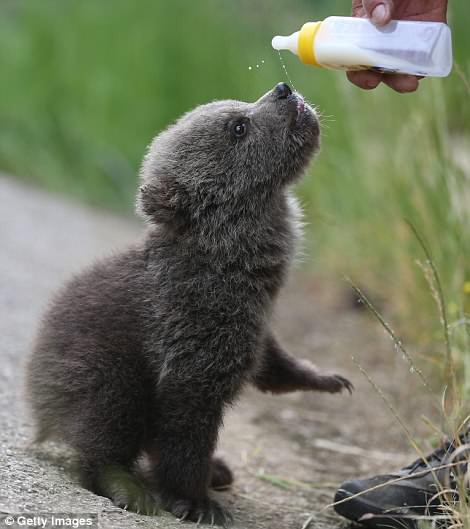 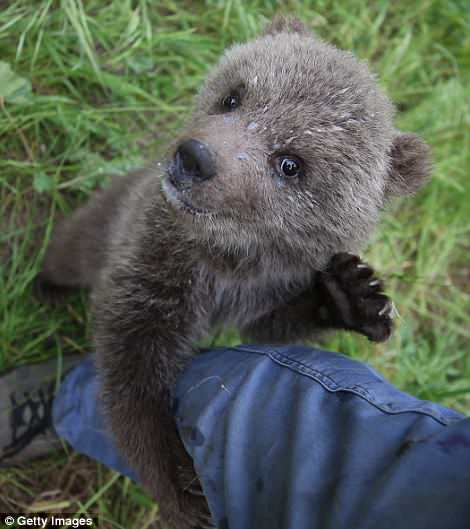 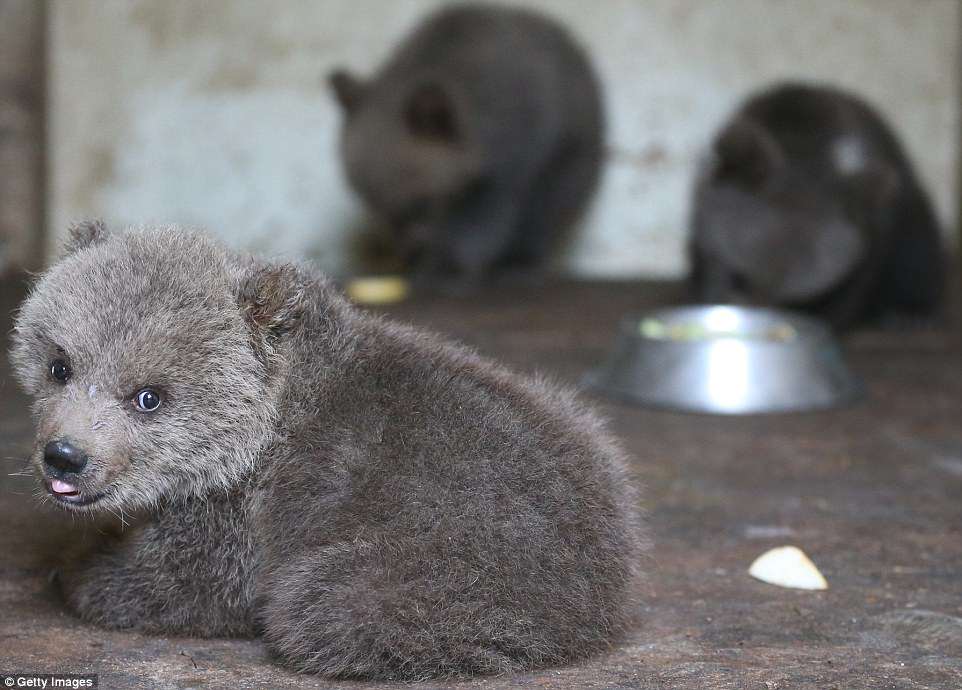 After the war, Wojtek was honourably discharged from the army and granted a peaceful life at Edinburgh Zoo, where he died in 1963.

A statue of Wojtek still can be admired in Princes Street Gardens in Edinburgh.