A top grammar school has been accused of illegally throwing out sixth-formers who failed to win top grades ahead of their final A-level year.

It is understood 16 pupils at St Olave’s Grammar School in Orpington, London, were told they had to leave because their performance in their AS-levels was not good enough.

The exams are taken in Year 12, although many schools are now dropping them following government reforms.

The school, in the South London borough of Bromley, allegedly told the pupils their places for year 13 – the last year of school – had been withdrawn after they failed to reach the required three Bs.

It is understood 16 pupils at St Olave’s Grammar School in Orpington, London, were told they had to leave because their performance in their AS-levels was not good enough

One father accused the school of dumping his son like ‘old garbage’.

Other pupils were told they would be allowed to continue on a discretionary basis and were asked to sign a contract warning that if they did not get a minimum B grade in their mock exams, the school reserved the right not to enter them for their A-levels.

Lawyers acting for two of the affected families have issued proceedings against the school’s governing body.

Parents said many of the pupils were in tears when they discovered the news.

One father said: ‘My son is devastated. It’s like putting your old garbage out. He doesn’t know what to do. We are in limbo. School starts soon and we don’t even know where he’s going.’

Days before the new term starts, those who have lost their places are having to look for another school or college to take them on and are said to be ‘devastated at losing their friendship group’.

Yesterday, experts said a number of other schools, including other high-achieving grammars, were employing similar tactics to ensure the best possible results.

However, it is thought this is the first time parents have challenged the issue in court.

Dan Rosenberg, the lawyer acting for the families, said the parents claim the school is operating an unlawful policy, The Guardian reported. He said: ‘Proceedings have now been issued. As well as assisting our clients, these proceedings will hopefully assist others who may be affected now and/or in the future by the school’s policies and practices.

‘We hope that the governing body will now reconsider the policy and its application, and further that the children affected can return to their A-level studies at the start of term with their peers.’

Pupils who lost their places were regarded as highly academic, passing an exam to get into the school aged 11.

They all then met the threshold to be accepted into the sixth form, with many achieving a string of A*s and As at GCSE. 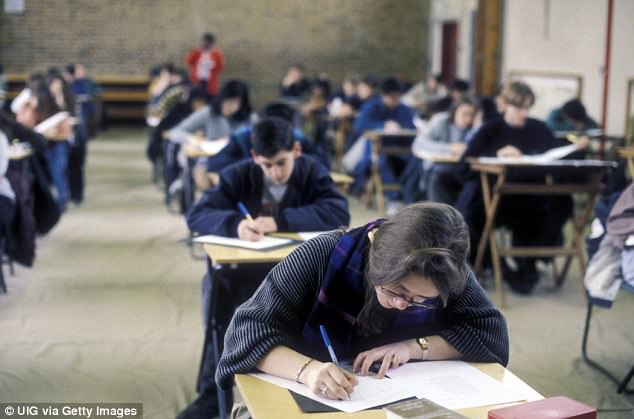 St Olave’s is one of the highest achieving schools in the country. On its website it states that this year’s A-level pupils were awarded 96 per cent A*/B grades, 75 per cent of all grades were at A*/A, and 32 gained straight A* grades in at least three subjects.

Education lawyer Imogen Jolley, of Simpson Millar, said withdrawing a school place at the end of year 12 amounted to an exclusion.

Under government guidance, it is only lawful to exclude a pupil on disciplinary matters.

It states clearly that it is ‘unlawful’ to exclude for ‘a reason such as academic attainment/ability’.

It is understood the guidance applies to all local authority-maintained schools, but not to sixth-form colleges or academies for 16 to 19-year-olds.

The school did not respond to a request for comment.