Oscar Wilde’s deathbed tears for his only love

Oscar Wilde was in love with his boyfriend Lord Alfred Douglas until the day he died, a previously un-published letter has revealed

Oscar Wilde was in love with his boyfriend Lord Alfred Douglas until the day he died, a previously un-published letter has revealed.

Wilde, who was married with two sons, endured a tempestuous relationship with Douglas, known as a ‘Bosie’, who was 16 years his junior.

Their affair led to Wilde being jailed for gross indecency, a term behind bars that would eventually lead to the playwright’s death.

When Alfred’s father, Lord Queensberry, found out about the relationship he accused Wilde of sodomy, incensing the writer – who rashly sued for criminal libel.

However, Wilde lost the case and the revelations in the courtroom led to him being prosecuted for homosexual acts and jailed for two years.

It has been suggested that Wilde and Bosie lived together for a brief time in Naples, Italy, after his release from Reading Gaol in 1857, but their relationship broke down.

However, an account of Wilde’s final days has found that the flame between the two burned bright until he passed away in Paris in 1900, reports the Times.

Robert Ross, a former lover of the Irish writer, wrote a letter to More Adey, a mutual friend, just a fortnight after Wilde died, aged just 46.

He explained: ‘Suddenly he [Wilde] broke into a violent sobbing and said he would never see me again because he felt that everything was at an end — this very painful incident lasted about three quarters of an hour.’

Experts have previously interpreted this as Wilde declaring his affection for Ross, but an unpublished version of the letter, found in the Clark library at the University of California, has revealed a new possibility.

Laura Lee, a Wilde scholar, said that a ‘him’ was mentioned a few sentences earlier, in reference to someone having a sent a letter and cheque. 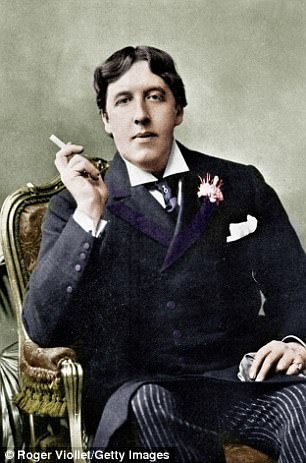 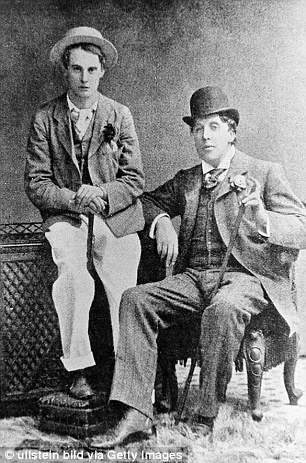 Wilde, who was married with two sons, endured a tempestuous relationship with Douglas, known as a ‘Bosie’, who was 16 years his junior

She believes that the ‘him’ in question was Bosie.

In the past it has been believed that Ross writing ‘me’ may have been a mistake, but Ms Lee does not think this is the case.

The scholar, who is writing a book on Wilde called Oscar’s Ghost, said the writer often told loved ones he and Bosie were no longer an item, so that they would send him money.

Ms Lee told the Times: ‘Wilde wrote a letter to Ross that claimed that he could not stand to be with Bosie any longer, but this could well have been an attempt to persuade the powers that be that he and Bosie had separated and they could turn the financial tap back on.’

She added: ‘My read is that they lost the energy to fight the world to be together, but that they didn’t stop loving one another.’