OTR Wife – Holding Down the Home Front by Sandra Covington 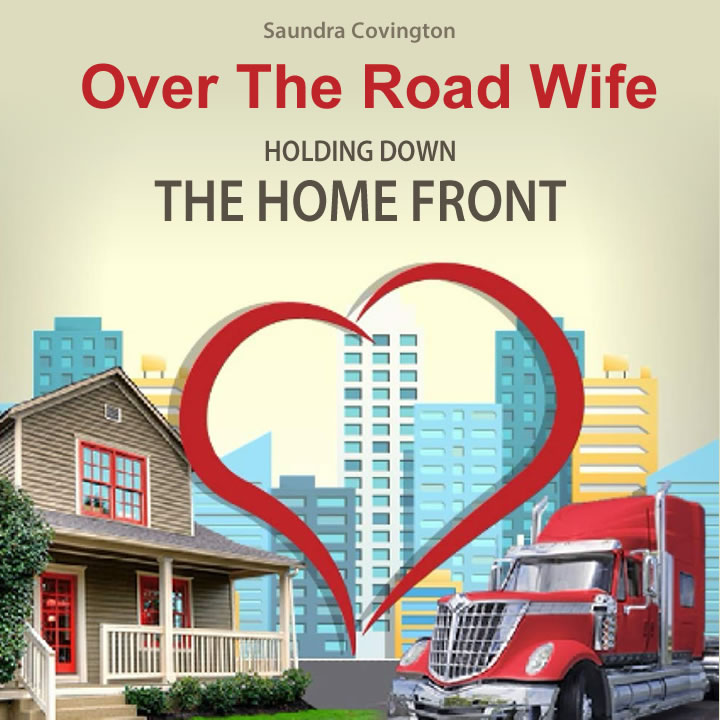 In her book, the Truck Driver’s wife, Saundra Covington, shares some of the most personal stories from her time with her husband. She takes her readers on a journey of great ups and horrible downs and shows people that they can come out from the other side better and stronger.

Saundra was always a very career-oriented person and started working at the age of sixteen, which is something all women in her family historically did. Saundra bought her first home at the age of twenty-nine, which shows how driven and independent she has always been. Such a hard-working person almost always has grand ambitions and dreams, but this was not the case with Saundra as she liked to keep herself grounded at all times.

In great detail, Saundra’s life is discussed in this book, from her falling in love and marrying the love of her life to losing a child and then hitting a financial rut. This story reminds its readers of the struggle and difficulties that everyone has to face in life and the perseverance you need to overcome such demanding obstacles.

Love: Life is not a Disney movie; it is filled with challenges and hurdles to overcome. Saundra Covington knows this very well and makes a great effort to put forth her opinion in a very realistic and honest way. After meeting George, a truck driver who instantly liked her, Saundra was not starstruck with love at first sight, mainly because she did not believe in such things. Eventually, however, she started to fall in love with George. Love is not something that can be sparked right from the get-go, and this statement reigns true in the story Saundra tells. As the story progresses, Saundra reminds the reader that love is unique to the people that share it and that it is not something that is meant to fade away but rather cherished and nurtured.

Marriage: Saundra talks about her experiences keeping the spark alive between herself and her husband through thick and thin, just as promised when they first took their vow at their wedding. To Saundra, her marriage to George was the best thing that happened to her; she fell hopelessly in love with him to the point that she felt their honeymoon phase never actually faded. They both led a very non-conventional marriage mainly due to their differing schedules. Being a truck driver, George was never really home most of the time, and Saundra kept working well into her 40’s, which would have made it very difficult for them to raise a child together.

Loss: No loss is greater than the loss of losing a child, and the loss of something as precious can easily disrupt a marriage, but that was not the case for the author of this book, Saundra Covington. After Saundra had a miscarriage, she learned that she had an infection that could only be cleared by a hysterectomy; this meant that she could never become a mother again. On receiving this information, Saundra offered George a way out of the confines of marriage, thinking about how much George wanted to have kids; However, George did not hesitate to let Saundra know that he did not marry her for her ability to give him a child and that he married her because he loved her. This whole scenario helps the reader understand the depth of the relationship that these two individuals share, and the love that binds them together proves to be very strong.

Monetary loss: Keeping your finances in alignment with your expenses can be a tricky business for people belonging to all walks of life. This especially holds true for Saundra and George because they live a very different life than other people. After both of them were able to save up money, they decided to invest money in a truck business that failed to take off-putting the family into debt, which ultimately led them to file for bankruptcy. Normally, such a horrible situation would harm the fabric holding a relationship in place, but such was not Saundra and George’s case. They faced their troubles together as true partners, focused on a common goal. Happiness to them was always in the little things, and nothing ever was prioritized more than the wellbeing of love and connection.

The Truck Driver’s wife offers a deep insight into the world of two people that were always the right fit for each other as they went through harsh trials and came out of them successfully. Even when things got rough, and they started to question their bond, they managed to pull through and come together in the end. To Saundra, this was god’s plan all along, and her meeting George all those years ago was no coincidence; it was faith.

About Author
Saundra Covington is a writer from Fresno, who has lived her life making it better for herself and the people around her. Not only is she a writer, but she is also a truck driver’s wife which comes with a whole different set of responsibilities – such as managing his expenses along with her own. She is currently working from home, trying to adjust to the new normal along with living with her husband George, who has just gotten his broker’s license. Saundra is greatly involved in the community she lives in, loves to help people, and most of all, and loves travelling.

This book highlights all the struggles a couple goes through, especially when your husband is a truck driver. This is how a couple goes through life with struggles all around their lives; they overcome every obstacle that life throws at them and make it even stronger at the other side of the road. George, a truck driver meets the love of his life at a turning point in his life; both of them fall in love and build their lives together. As the story unfolds, they face many things that would have broken any other couple but they still make it. The grief of losing something so precious, and losing everything you have ever lived for – is the greatest loss known to man. Watch as their life unfolds and becomes the definition of perfect for them.