Britain’s oldest lottery winners who won an £18 million prize are returning to their newly renovated home they have lived in for 57 years.

Dennis Banfield, 87, and wife Shirley, 83, have been living in a £66-pound-a-night budget hotel nearby while builders worked on the family home.

The couple, who have been married for 60 years and won the prize back in February, are looking forward to moving back into their home and having a quiet Christmas with the family.

Dennis, 87, and Shirley Banfield, 83, with their daughters Tina (pictured right) and Karen (pictured left, became the oldest ever lottery winners when they bagged the £18 million prize in February 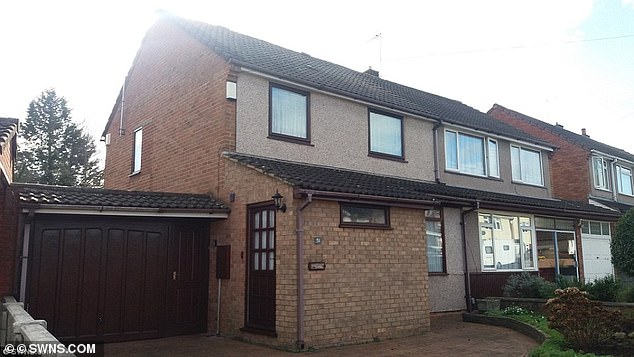 Rather than buy a plush new property the Banfield’s, who have lived in the above property for 57 years, renovated it while living in a budget hotel

The lucky couple raised their two daughters Tina and Karen in the three bedroom property in Winterbourne , Gloucestershire, which cost just £2,000 in 1961 and is now worth £316,000.

Speaking outside the hotel to The Mirror, Mrs Banfield said: ‘We decided to stay in the house and just have the whole of the inside of it completely redone.

‘We’ve been there for 57 years now. We know the area, the house is not overlooked, it’s got a lovely big driveway.

‘We’ve gone back to see it as it’s been done up.

‘There’s still a bit of a way to go on it, but we’re hoping to move back in within the next fortnight – we’ll definitely be back in in time for Christmas.’ 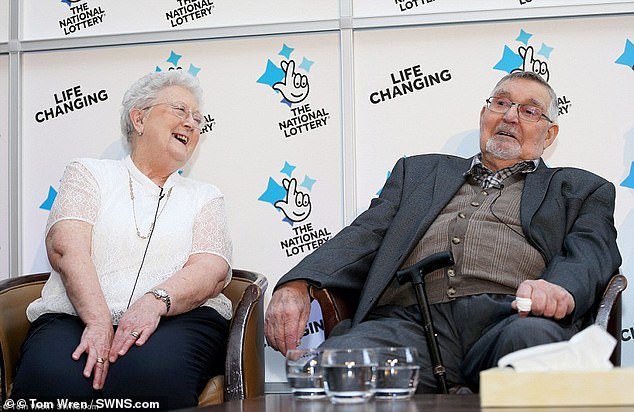 Dennis, 87, and Shirley Banfield, 83, were thrilled the win the jackpot and make their daughters future financially secure 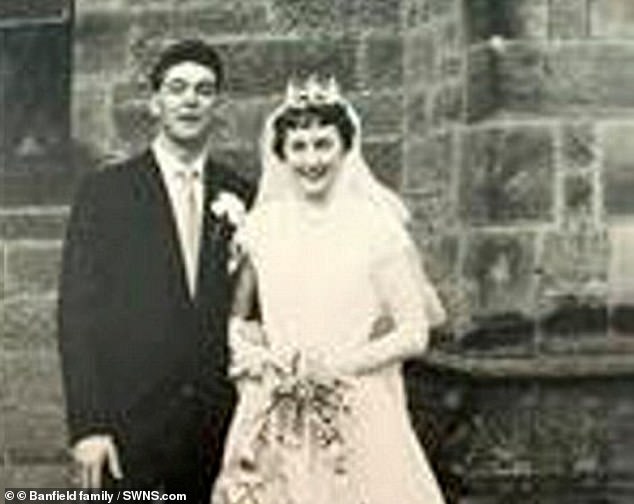 The couple, who met on a blind date, have been married for 60 years, and are looking forward to moving back into their home

The house still has a decorator’s van parked nearby and skip outside finishing the renovations off.

The couple, who met on a blind date and live in Winterbourne, a large village to the north of Bristol, have given away a lot of their money to charity.

Some of it has gone to community projects, the community association and to the children’s hospital.

While some of it has gone to ensuring their daughters Tina, 55, and Karen, 52, are financially secure.

Mrs Banfield added: ‘They have both bought new houses with their share of the money.

‘It means a lot to us to know they are looked after.’

When they won the cash, RAF veteran Mr Banfield broke down in tears after years of telling his wife and children ‘it was just a matter of time’ before they snagged the jackpot.

He revealed that in the months before the life-changing win his wife had even pleaded with him to stop buying Lotto tickets as ‘they never won anything’.

But a resolute Mr Banfield continued to play every week, even forcing his wife to buy tickets from the local newsagents on his behalf when he was in hospital over Christmas to undergo a knee operation. 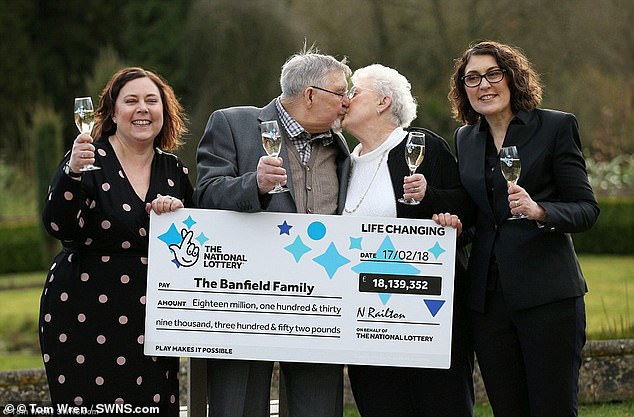 At the press conference in February, an emotional Mr Banfield said he had been buying tickets every Wednesday, Friday and Saturday for 25 years as he hoped to make his daughters Tina, 54, and Karen, 51, ‘financial secure forever’.

Mr Banfield, served in the British Army in Holland, Germany and Italy and was later flew with the RAF in Egypt.

He later became an electrician and worked for 40 years at South West Electricity Board.

While Mrs Banfield worked in local government, before raising her daughters, as well as being a member of the church choir.

The family celebrated the extraordinary win at the time by going to the local carvery.