Our intervention gets reader’s £30,300 back from Santander

Battle: Jean Timmins made her own checks before her bank let the sums be paid

Why should it often take the intervention of the press to get financial justice for consumers?

It’s a question I regularly ask myself – although I can’t deny I thoroughly enjoy the moment whenever a mighty financial services company caves in, usually for fear of getting a pasting in the personal finance pages of The Mail on Sunday.

It makes me feel good and vindicates my profession. For example, over the years I’ve managed to get many insurance giants to review claims they had originally rejected and pay out huge sums as a result.

Invariably, the policies were bought to provide financial protection at a time when it is most needed – when a household is struck by long-term illness or a life- threatening health condition.

To have a claim rejected against such a scary backdrop can be deeply unsettling, especially when the reason given is a spurious one based on disputed medical evidence or the nondisclosure of a medical issue many moons ago.

Thankfully, our interventions have often righted these wrongs.

It has happened again in recent days, albeit in a different area of the financial services industry. Recently, I’ve been looking at some of the scams that have caught out a number of readers.

Scams committed by fraudsters which have resulted in devastating financial losses for those targeted. They came to my attention because of an article I wrote last month on investment cloning – in which a fraudster copies the details of a legitimate financial services firm and then persuades investors to make investments through the fraudulent website. The money invested is never seen again.

Jean Timmins, a lovely 72-year-old retired secondary school teacher from Wolverhampton, was one of those who contacted me – egged on by her neighbour Phil Haden, a financial adviser whom I have known for a while.

Since the end of last year, she had been battling with her bank (Santander) over two payments she made to scammers totalling £30,300.

Only our intervention got her the money back. Why? Let’s go back to the start. Last September, like many people, Jean was looking for a better return on her cash savings. National Savings & Investments, her savings port of call, had just slashed its rates, so she started to hunt on the internet for better alternatives.

She came across a company called Redmaine Cooper Price offering what looked like attractive bonds. Everything seemed normal – the company had a London address and an authorisation number from the City regulator.

She completed a form online and then received a call from someone called John Watts who said that there was a bond available (UK Treasury 6 per cent) that might interest her.

‘He was very professional,’ says Jean. ‘He emailed details about the bond, including when interest would be paid [bi-annually] and the date the bond matured [December 2028].

Given it was a Government bond, I couldn’t see how it could go wrong. In order to invest, he said I would have to send copies of my passport photo identification, which I duly did.’

Emails from Watts referred to his 15 years of experience ‘working in UK bond markets’. They also quoted a regulator’s authorisation number and referred her to the regulator’s list of approved companies. These details appeared to confirm that RCP was an authorised company.

Maybe it was the next bit that should have raised a few alarms in Jean’s mind. ‘He said there may be a problem with my bank Santander releasing the money,’ she recollects.

‘He said Santander would prefer me to buy its own products – and he advised me, if questioned by the bank, to say the money I was investing was to buy goods, not bonds.’

She duly invested £10,300 and, although challenged by Santander, the payment (to RGS Clearing Limited) went through. Susan Clarke, in administration at Redmaine Cooper Price, confirmed receipt of the money and gave Jean details of how she could track her investment online.

Later the same month (October), John Watts phoned again to say he had another bond that might interest her – this time with Lloyds, a company he said was safe as the bank was still part Government owned. It was a lie – the Government divested its stake in Lloyds nearly four years ago.

After being told the bond had a coupon of 9.625 per cent and paid annual interest until April 2023, Jean was hooked and sold a cash Isa so that she could invest £20,000 in the bond. Again, Santander queried the transfer, but allowed the payment through.

It was in December, when she could no longer log in to her account, that she became suspicious. She rang the regulator’s helpline and was advised to contact her bank.

Unbeknown to Jean, only weeks earlier, the Financial Conduct Authority had issued a warning about Redmaine Cooper Price, stating it had cloned the details of a French-based company called RCP, authorised to sell financial products in the UK.

The Payment Systems Regulator is looking to boost the protection available to the likes of Jean who are victims of authorised push payment scams.

In the first six months of last year, consumers lost £208million to such scams. Chris Hemsley, PSR boss, now wants it made harder for such crimes to take place – and he wants victims properly protected.

Proposals include making the banks disclose their individual data on push payment scams. This would require banks to show what proportion of scammed funds they refunded to customers – and the amount they were able to retrieve from the fraudsters’ accounts.

This data, argues the PSR, would prompt banks to raise their game to avoid being labelled weak on financial crime.

The regulator for payment systems is also considering whether banks should be compelled to share more data on scams so they can stamp down on financial crime more quickly.

If you think you’ve been scammed, you should call your bank or card provider immediately. Tell them what happened and let them know the bank account number your money was sent to.

The bank might be able to either stop the transaction or recover your money from the fraudster’s account.

You should also contact the bank where your money was sent. It may be able to halt the payment.

In other words, John Watts, Susan Clarke and Chris Moore (allegedly Redmaine Cooper Price’s compliance officer) were scammers. Last month, after investigating the scam, Santander wrote to Jean, telling her that it would not be reimbursing her losses.

It had assessed her case against the voluntary ‘contingent reimbursement model’ code for authorised push payment scams – and had concluded she had not taken the care ‘that was expected’. Push payments are where people are persuaded to make real-time payments to fraudsters.

She was furious. ‘What more could I have done?’ she asks. ‘I had phoned the FCA to check the company’s authorisation. I had phoned the company (RCP), only to be told everyone was working from home because of Covid. And I assumed Santander had done its own checking when querying the two payments.’

Not happy, she said she would take her complaint to the Financial Ombudsman Service.

Earlier this month, she mentioned the scam in passing to a neighbour – Phil Haden, a chartered financial planner with Prosperity Wealth. Having exchanged a few emails over the years, he asked me to take a look. I promptly contacted Santander. 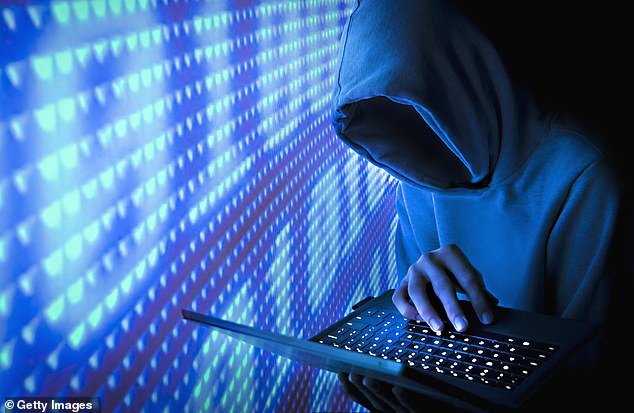 Help: Police are increasingly likely to come knocking at your door if they think you are being scammed online

After a couple of days, it responded to say that it was overturning its original decision to decline Jean’s claim. It said no blame could be attributed to her.

It said: ‘Having reviewed Mrs Timmins’ claim, we will be refunding £30,300 to her under the CRM code’s ‘no blame’ scenario. Both of Mrs Timmins’ payments were stopped by our fraud prevention systems while we had conversations with her, warning her to perform further checks on Redmaine Cooper Price, including confirming its legitimacy with the FCA.

Upon hearing the news, Jean’s response was joyous. In an email to me a few days ago, she said: ‘I was totally overwhelmed when, yesterday evening, I heard Santander would be refunding the whole of the monies to me.

‘I cannot thank you enough for doing this and I am very grateful. ‘I also hope that in highlighting my case, you may help unsuspecting people avoid falling victim to these disgusting scams.’

So, a great result in the end. But it begs the question: how many Jeans are out there who have been victims of scams and have been left high and dry by their bank? Too many, I fear. The quicker the banks are required to give better protection to the likes of Jean, the better.

GOOD NEWS: POLICE MAY COME TO THE RESCUE

Police are increasingly likely to come knocking at your door if they think you are being scammed online or over the phone.

Scam victims were prevented from handing over as much as £45.3million to fraudsters last year thanks to the initiative, according to banking group UK Finance.

Under the banking protocol scheme, bank branch staff alert local police forces when they suspect a scam is taking place. Police officers then visit the home of the suspected victim and intervene. The protocol is designed to prevent crimes, including impersonation, courier, rogue trader and romance- related scams.

In some sophisticated scams, victims are convinced by the fraudster not to trust their bank, so when bank staff warn them they are being scammed they still don’t necessary believe it. But, a police officer turning up at their door can often be enough to shake the victim out from the spell cast by the crook.

Since September, the protocol has been rolled out to cover attempted bank transfers made by customers through telephone and online banking as well as in branches. Banking staff in call centres and online banking teams notify the police when they believe customers are being scammed.

So far, just 24 police forces have signed up to the scheme – just under half have yet to do so. Halifax bank’s Barry Sobey, who is a branch manager in Newcastle, has successfully used the protocol several times.

‘Last month we helped to stop an 81-year-old customer from handing over £80,000 as part of an investment scam,’ he says. ‘The victim was about to hand over his daughter’s inheritance to a convincing scammer who had a cloned website, investment prospectus and was very polite and well-spoken.’