Former Planned Parenthood president, Dr Leana Wen, says she ‘faced daily internal opposition’ in her nine-month tenure as she tried to shift the focus away from abortion to be seen as a mainstream healthcare organization.

‘I believe abortion is about health care, not politics. Many of my colleagues disagreed,’ Dr Wen, an emergency physician, said in an op-ed for the New York Times, published on Friday.

However, her words chalk with reports from ‘dozens’ of anonymous staff interviewed by Buzzfeed and the Times, who felt her fatal flaw was being ‘a poor manager, perhaps unprepared to lead a nationwide organization with more than 600 health centers.’

Dr Wen, 36, broke the news of her own ousting on Tuesday afternoon in a tweet, saying: ‘I just learned that the @PPFA Board ended my employment at a secret meeting.’

‘We were engaged in good faith negotiations about my departure based on philosophical differences over the direction and future of Planned Parenthood,’ Dr Wen continued.

It comes amid the most challenging period in the history of the organization since Roe v Wade in 1974, with anti-abortion measures sweeping the country, and six states on the cusp of shuttering their last remaining abortion clinics.

Sources told the New York Times the group’s leadership want ‘a more aggressive political leader to fight the efforts to roll back access to abortions.’

Dr Leana Wen was appointed president of Planned Parenthood less than a year ago in September 2018, following a stint as Health Commissioner of Baltimore City in Maryland 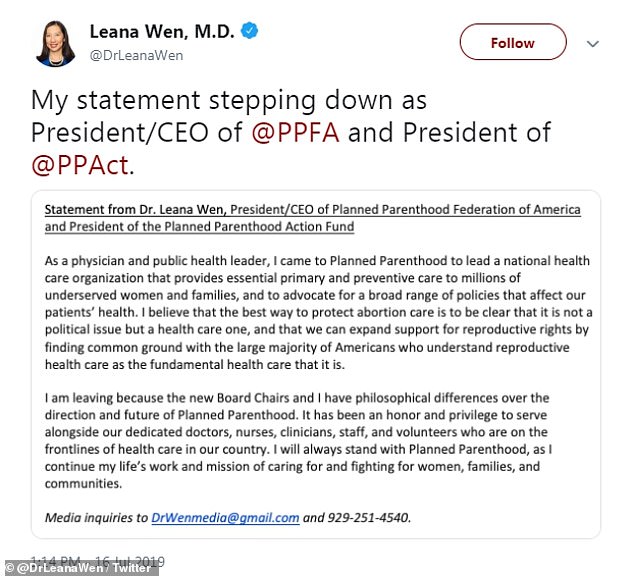 Dr Wen, the first doctor to hold the post in years, was appointed less than a year ago in September 2018, and took the role in November, following a stint as Health Commissioner of Baltimore City in Maryland.

Dr Wen took the post weeks after Brett Kavanaugh was controversially named a Supreme Court judge, giving anti-abortion conservatives an unprecedented majority on the most powerful board in the US.

In May, Planned Parenthood, led by Dr Wen, declared a state of emergency to rally people behind their cause.

But critics say Dr Wen has struggled to cultivate a political voice and truly galvanize people to front a movement.

In her new op-ed, Dr Wen does not contest that characterization: she did not want to be seen as an activist.

‘While the traditional approach has been through prioritizing advocating for abortion rights, I have long believed that the most effective way to advance reproductive health is to be clear that it is not a political issue but a health care one,’ Dr Wen writes.

‘I believed we could expand support for Planned Parenthood — and ultimately for abortion access — by finding common ground with the large majority of Americans who can unite behind the goal of improving the health and well-being of women and children.’

However, her claim, that ‘my attempt to depoliticize Planned Parenthood’ was an ‘area of contention’ does not match up with other accounts from Planned Parenthood staff, who said Dr Wen wouldn’t have been hired without approval of her vision for the group’s direction.