‘Total embarrassment to Australia’: Outrage after packet of Tim Tams is spotted on sale for $26 at Sydney Airport

The incredibly expensive price of a packet of Tim Tams for sale at an airport has sparked outrage.

A packet of the chocolate treats was spotted on sale at Sydney Airport for $26.

A photo of the Tim Tams was posted to Reddit, where commenters expressed their disbelief at the biscuits being sold for such a high price.

An image of the 663 gram packet of biscuits, which contain 39 bite-sized pieces (pictured) sold at Sydney airport was uploaded on Reddit

Users were left outraged after Sydney Airport sold Tim Tams for $26, with one saying the cost was a ‘total embarrassment to Australia’

Meanwhile, the 170g ‘bites’ are sold across Australian supermarkets for $4.40 each.

Users compared the $26 bag to the regular 200g packet, which contains 11 biscuits and retails at Woolworths and Coles supermarkets for $2.50.

‘I take delight in spending nothing at Sydney airport. I meant not a single cent if I can avoid it,’ one user wrote.

‘663 grams which is approx. 3.3 times more than a standard pack of 11 at iirc 200grams. Even allowing for the extra volume it is at least twice the price,’ another wrote.

However, others said the price didn’t come across as a shock.

‘They also have a ”family pack” of four regular packs in a box that retails for like $30…,’ one wrote.

‘This one is 663 grams, but I assume due to it being in an airport, bite size form, and larger packaging, that’s probably why the price is the price it is,’ another wrote.

However, some users said the price didn’t come across as a shock 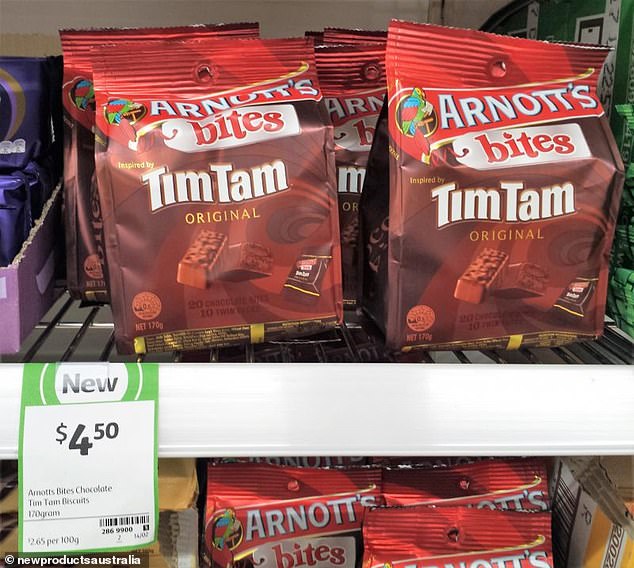 Meanwhile, the 170 gram Tim Tam bites are sold across Australian supermarkets for $4.40 each