A 2.6 metre tall fence designed to protect Parliament House from attacks has drawn outrage from the public.

The first panels of the barrier could be seen being lifted into place Tuesday, while people took to social media to label it an ‘appalling’ eyesore.

The installation forms part of a planned $126.7 million security upgrade to the Canberra building and was voted on and approved by Parliament last year.

A 2.6 metre tall fence designed to protect Parliament House from attacks has drawn outrage from the public, after work began Tuesday (pictured)

Senate President Stephen Parry had told a parliamentary committee in May that the fence had been designed to minimise its visual impact.

However, many members of the public took to social media to vent their frustrations at the new aesthetic.

‘No excuse for this fence. Parliament House was designed in the shadow of Munich. Fence is an insult to its architect & us,’ Greens Candidate Patricia Cahill said.

While another person added: ‘Fencing changes more than the aesthetics of Parliament House; it changes the symbolic character of the building.’

Others still compared the change to security to the fear that followed the September 11 attacks.

They wrote: ‘The fence around Parliament House is absolutely f*****. We’re turning the most democratic building in the world into a post-9/11 airport. 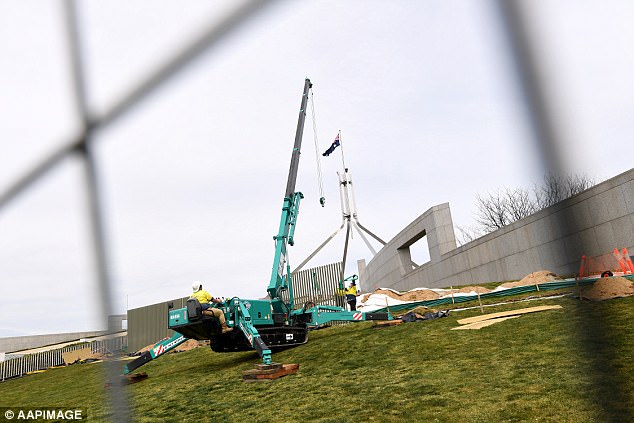 The first panels of the barrier could be seen being lifted into place (pictured), however many people labelled it ‘appalling’ and ‘absolutely f*****’ 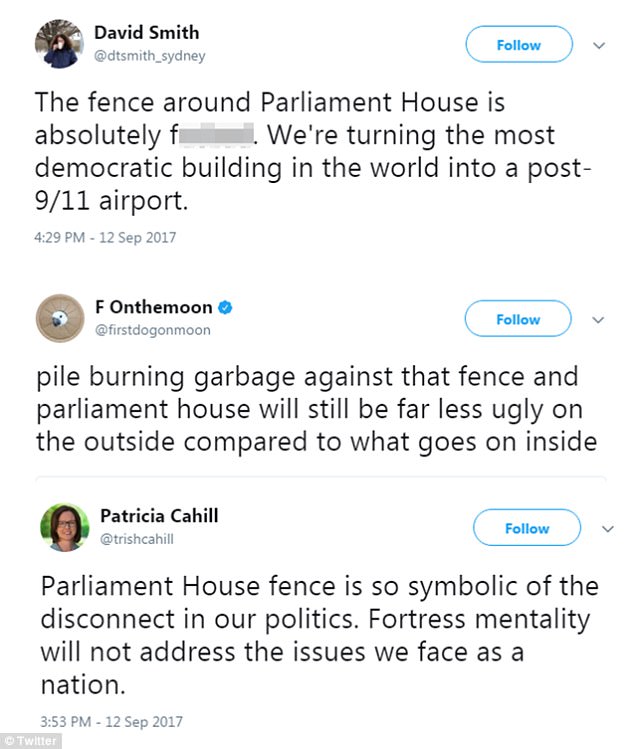 Despite Senate President Stephen Parry telling a parliamentary committee in May that the fence had been designed to minimise its visual impact, many social media users took to Twitter to slam the aesthetic

While one person used the fence to poke fun at the politics that went on inside the building.

‘Pile burning garbage against that fence and parliament house will still be far less ugly on the outside compared to what goes on inside,’ they wrote.

The imposing fence will stand metres high upon completion and is designed from prefabricated panels with thin vertical bars.

Members of the public are expected to still be able to access the roof of Parliament House via an internal lift. 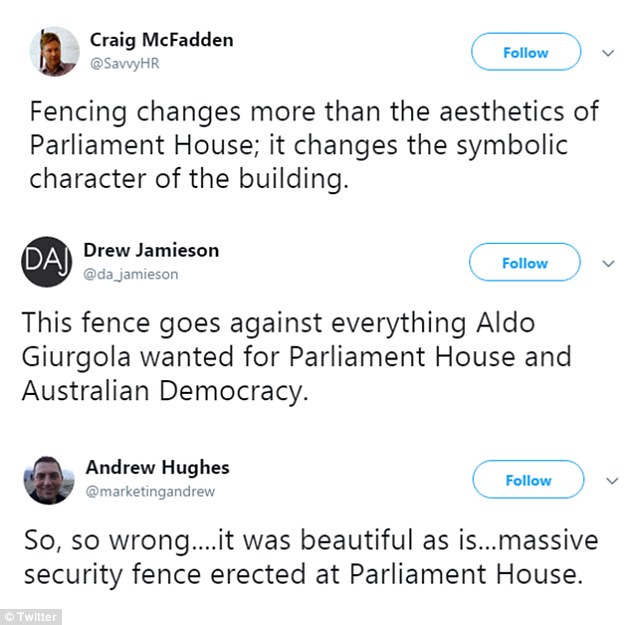 Others told how the fence went against the architect’s original plans, which according to the Parliament of Australia’s website was to ‘be seen as extending an invitation to all citizens’ 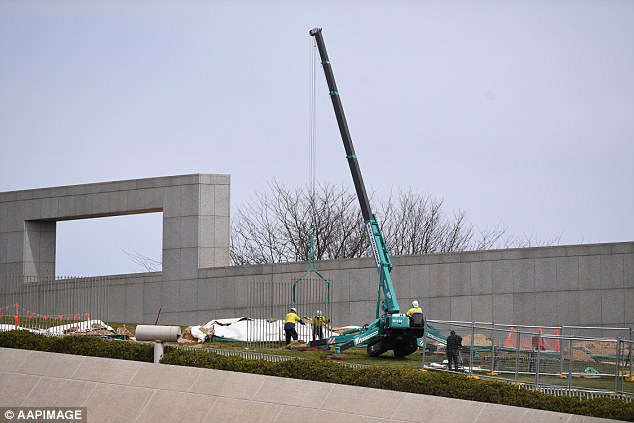 Parliament House was designed by a New York-based architectural firm in the 1980s, with work led by Romaldo Giurgula.

The architect said at the time that it was ‘important that (it) be seen as extending an invitation to all citizens’.

One social media echoed these thoughts in their tweet, writing: ‘This fence goes against everything Aldo Giurgula wanted for Parliament House and Australian Democracy.’

The design of the building was part of international campaign that drew more than 320 entries, with the aim to ‘encourage public access and involvement,’ according to The Parliament of Australia.

The government website also states that it is ‘one of the most open parliamentary buildings in the world.’