Over 120 pregnant whales slaughtered in Japan for ‘research’

Over 120 pregnant whales have been killed in Japan in a hunt which scientists in the country described as ‘scientific research’.

The latest killings were officially classed as ‘biological sampling’ aiming to investigate ‘the structure and dynamics of the Antarctic marine ecosystem’.

But figures show that 333 minke Antarctic whales were killed last summer alone, of which more than 120 were pregnant females.

Around 67 per cent of the female whales killed were pregnant and 114 immature whales were killed on top of the fully grown minke.

More than 12 pregnant whales have been slaughtered in Japan, according to recent papers from the International Whaling Commission Pictured: A dead sperm whale lying on the deck of a Japanese whaling vessel in the northwestern Pacific Ocean in August, 2000 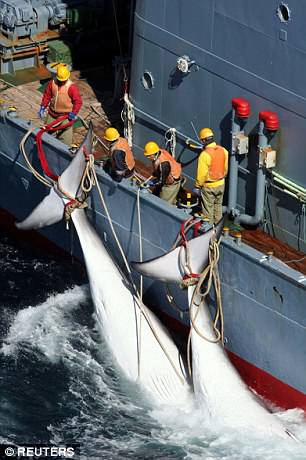 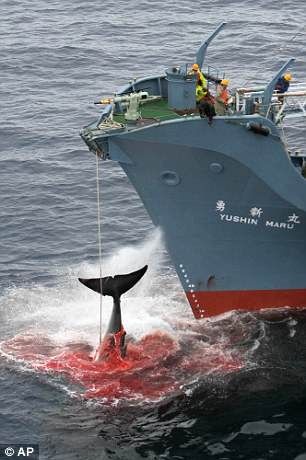 The whales were killed by firing ‘harpoons with a 30g penthrite grenade’ into their bodies to deliver a fatal explosion.

Despite international condemnation of the practice, Japan continues its controversial practice of whaling in the name of scientific research.

The nation claims the animal’s stomach contents are needed ‘to estimate prey composition and consumption’.

But Local media said that whale flesh was also being sold by the bucket load in Japan’s fish markets.

Alexia Wellbelove, a senior program manager at Humane Society International called the attacks ‘a shocking statistic and sad indictment on the cruelty of Japan’s whale hunt’.

‘It is further demonstration, if needed, of the truly gruesome and unnecessary nature of whaling operations, especially when non-lethal surveys have been shown to be sufficient for scientific needs,’ she told the Sydney Morning Herald. 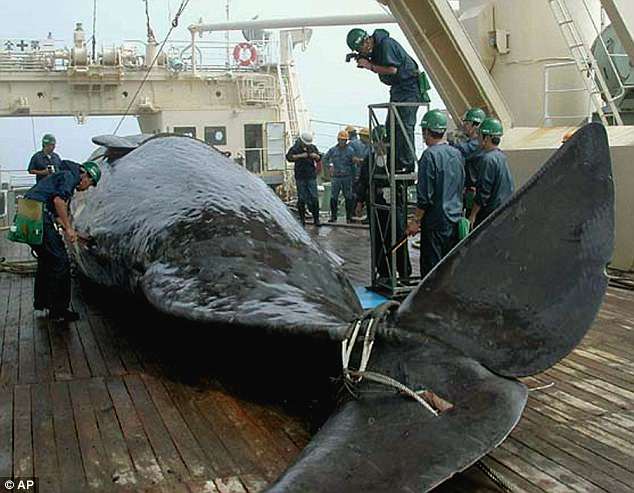 A researcher takes photos of a caught sperm whale aboard the Japanese ship Nisshin Maru during a research whaling mission in August, 2000