More than 300 passengers have been stuck aboard a Belfast-bound ferry overnight after six crew members tested positive for coronavirus.

A further 15 other people who came into close contact with the infected crew have also been told to self-isolate.

All those who are confirmed to have the virus are suffering from mild symptoms and are said to be ‘doing well’, the ferry company confirmed.

Passengers on the Stena Line ship were due to leave Liverpool at 10.30pm last night aboard the overnight Stena Edda vessel.

But while many woke up expecting to have arrived in Northern Ireland this morning the ‘irate’ passengers found they had not moved from the port in Birkenhead, Merseyside.

The vessel is being held at the Twelve Quays terminal in Birkenhead before passengers are disembarked. 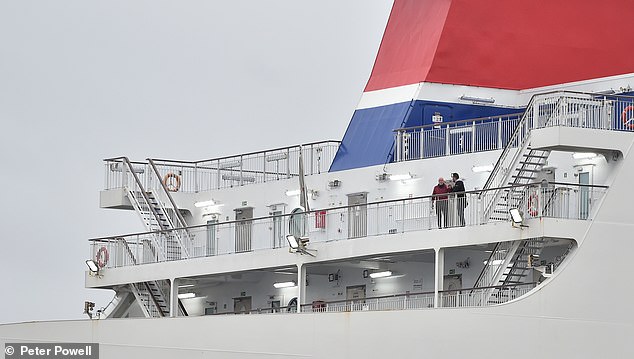 The boat carrying 322 passengers and 53 crew members was due to depart for Belfast at 10.30pm 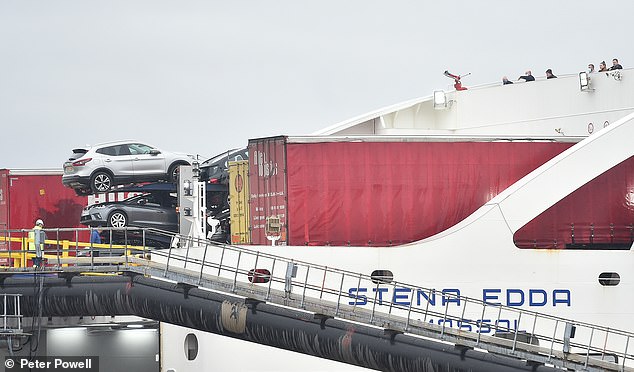 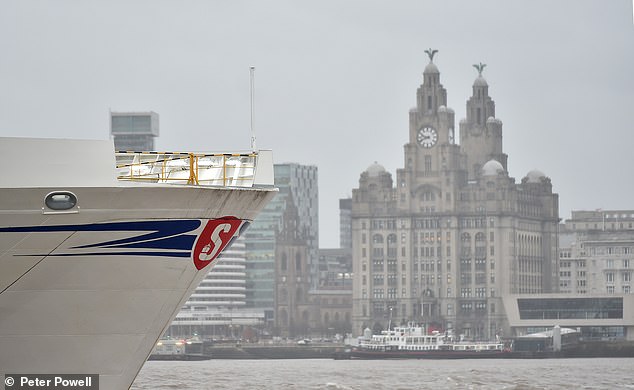 The boat carrying 322 passengers and 53 crew members was held in Merseyside by the Port Health Authorities due to the outbreak.

A spokesman for Swedish ferry company Stena Line confirmed none of those affected were passengers.

Do you know anyone who was affected by this?

Passenger Alan Cogan told The BBC passengers ‘had resigned themselves’ to being stuck and ‘were waiting to see what happens’.

The 47-year-old, sailing home to Northern Ireland, said tensions were initially high when a public announcement was first made about the situation on board around 3:30am.

‘I know there were a few irate people this morning,’ he said.

‘We all had visions of what had happened to the crew ships around the world when passengers had tested positive and were left stranded and not allowed off.

‘That would be a nightmare. It’s not the most comfortable boat.

Ships have been a focal point for Covid concerns after outbreaks on cruise ships left passengers and crew stranded aboard at the start of the pandemic.

The incident comes after Stena Line took delivery of a new ship earlier this month as part of an extensive modernisation of the company’s fleet. The Stena Embla is one of three vessels due to start sailing the company’s Irish Sea routes in the New Year.

A Stena Line spokesperson told Mail Online: ‘Stena Line can confirm that 6 members of the crew of the Stena Edda have tested positive for COVID-19 last night.

‘In line with our safety protocols we alerted the Port Health Authorities, who advised us to hold the vessel in Birkenhead as a precaution. 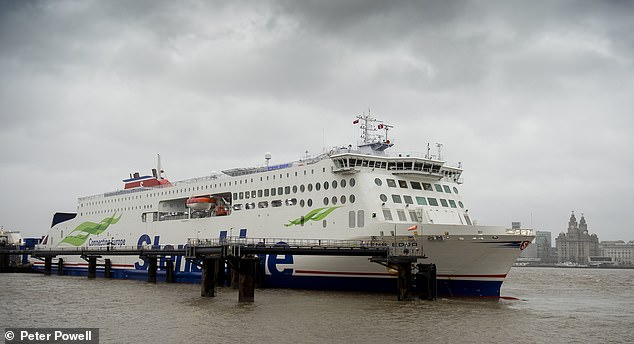 All those who are confirmed to have the virus are said to be ‘doing well’, the ferry company confirmed 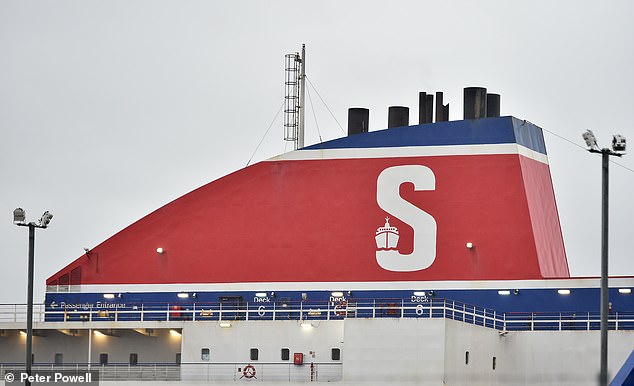 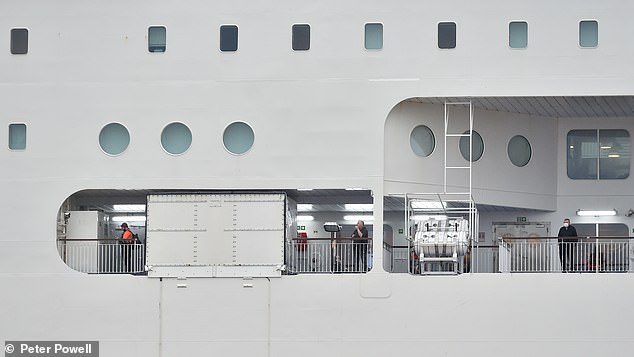 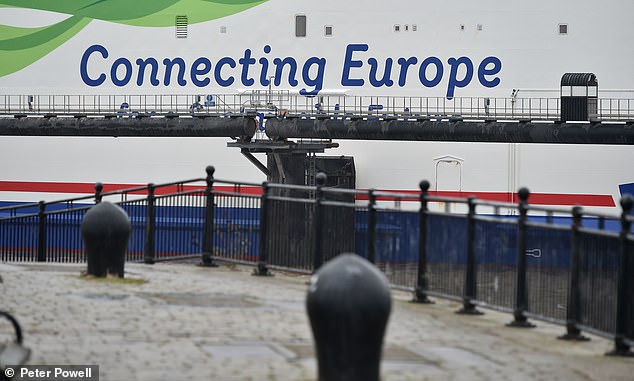 Passengers are understood to be disembarking again in Liverpool this morning, but photos show there are still many people on board 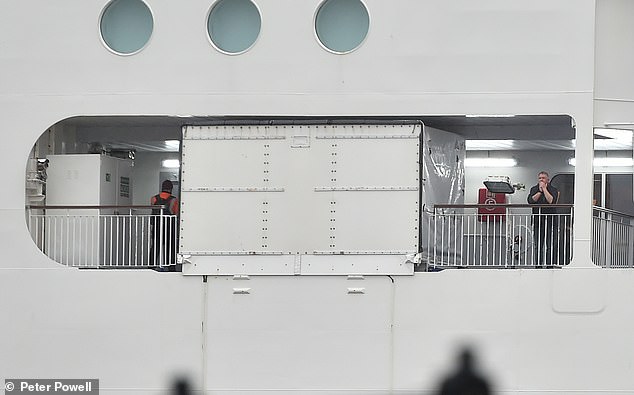 ‘The welfare of our passengers and crew is paramount at this time,’ a Stena Line statement said

‘322 passengers and 53 crew are onboard. The six crew members who tested positive for COVID-19 are being cared for and are doing well, with only mild symptoms. 15 close contacts have been identified and are self-isolating.

‘Stena Line is liaising closely with public health authorities on this matter who have advised us that we should disembark the vessel in Birkenhead.

‘The welfare of our passengers and crew is paramount at this time.’ 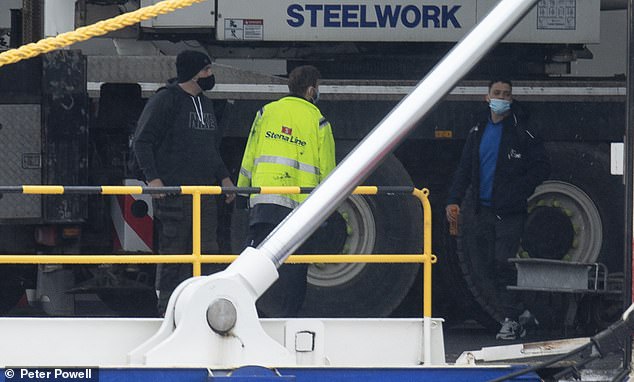 People, including Stena Line crew, can be seen from shore aboard the boat wearing masks 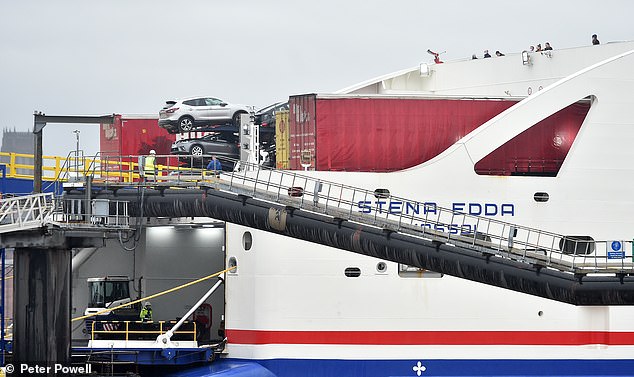 The Liverpool-Belfast ferry is docked in Berkenhead port in Liverpool, Merseyside

The passengers are understood to have begun disembarking around 9am this morning.

Passengers reacted to the news in anger and took to social media to vent their frustrations.

One furious passenger posted on Twitter: ‘Well this ferry truly is overnight. Still in Liverpool.

‘What’s going on Stena Line? No information or crew to be found.’ 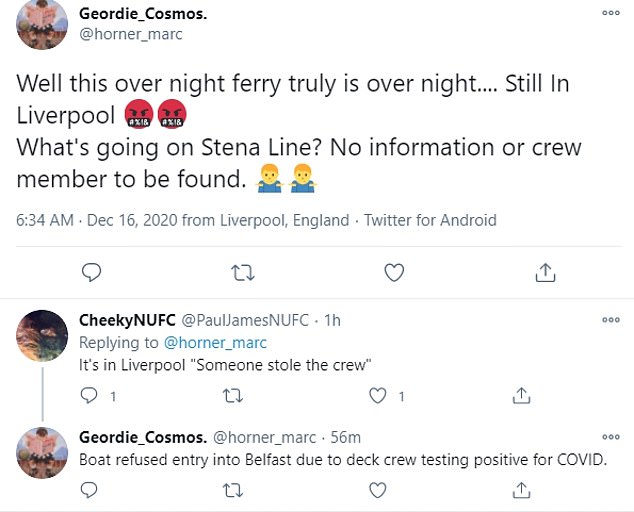 One wrote: On the boat from Liverpool to Belfast that was menat to take off at 10.30pm and they’ve just said after five hours on this boat we have to wait until 9am to disembark.

‘Sitting on a boat for 12 hours and no closer to home and without any ways of getting there.’

Stena Line have confirmed they will help passengers with further travel arrangements after their crew tested positive.

They said: ‘The passengers are being catered for and we will assist them with alternative travel arrangements.’

Do you know someone affected by this? Email antonia.paget@mailonline.co.uk