Overtaking car skids out of control on Queensland highway

This is the shocking moment an impatient driver attempts to overtake a car towing a van along a narrow road in Australia’s dusty .

Out of nowhere, a silver sedan zooms past on the right at speed, losing traction on the rough road and spinning out of control just metres ahead of the family.

Dash cam footage has captured the shocking moment an impatient driver skids out of control after attempting an overtake on a narrow, dusty highway

‘Just stay there,’ she tells her passenger who appears to have a baby sitting in the backseat as she rushes out of the car to check if the driver was alright.

The woman said the driver was ‘shaken up but okay’, adding that she gave the woman a lift to the next town as her car was a mangled wreck.

Social media users were quick to defend the actions of the overtaking driver, speculating that she could have been stuck behind the van for hours.

‘Curious as to how long commodore driver had been sitting behind van and if dashcam driver was doing the speed limit,’ one man wrote.

‘As a traveller there is nothing worse than sitting behind a caravan for dozens of kilometres,’ another agreed. 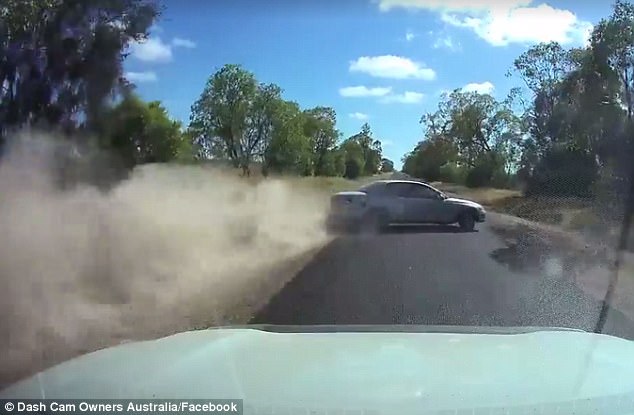