A chihuahua was so overweight he had to be carried outside to go to the toilet has been given a new lease of life after losing more than his body weight in less than a year.

Incredible pictures show the unbelievable transformation of the adorable purebred chihuahua, Cleatus, 15, from St. Augustine, Florida, who had been overweight for most of his life after being free-fed dried kibble since he was a puppy.

Cleatus, who ended up tipping the scales at 35 pounds, had had very little energy and never wanted to go outside. As a result, his owner, Austin Lee, a VP-roofing contractor, had to wheel the dog along in a cart when they went for walks. 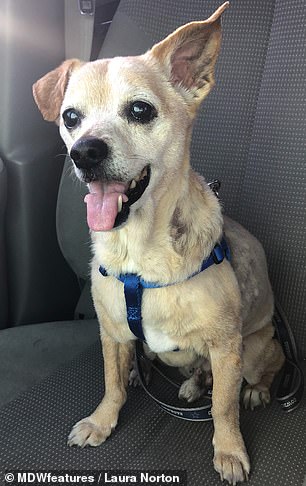 Wow! Cleatus, a chihuahua from St. Augustine, Florida, lost more than half his body weight in less than one year, going from a heavy 35 pounds (L) to a slim 16.8 pounds (R) 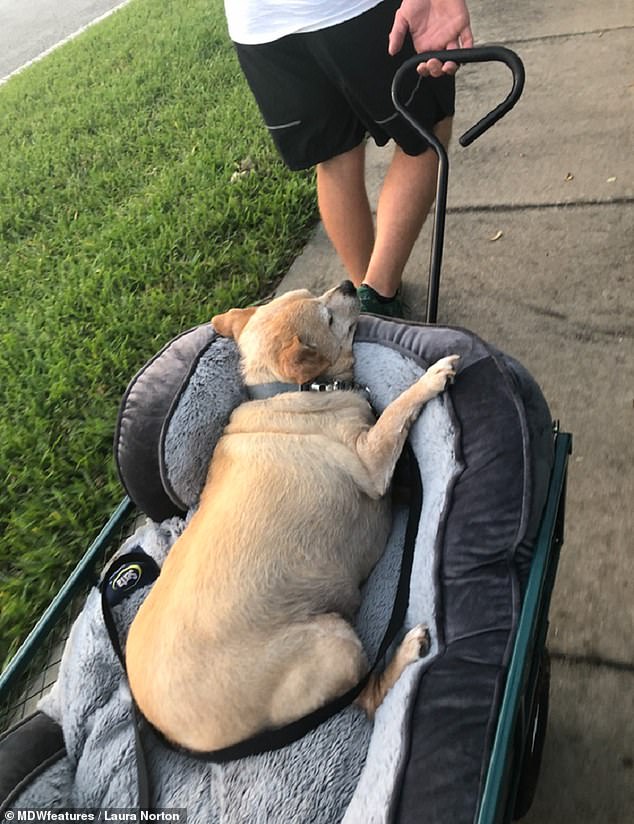 Struggle: He gained weight as a result of being free-fed dried kibble since he was a puppy, and even had to be wheeled along in a cart when his owner, Austin Lee, took him for walks

It wasn’t until Austin’s girlfriend veterinary technician and IFBB athlete, Laura Norton, 28, moved in in May last year that they decided to make some changes to Cleatus’ lifestyle.

They started with a dental clean and Cleatus had most of his teeth removed due to dental disease starting to take hold. 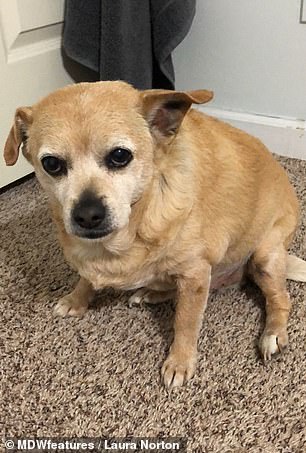 Hard: As seen at his heaviest weight, the dog had low energy levels and would hardly move

After blood tests, the pooch was diagnosed with an under-active thyroid which was slowing down his metabolism and affecting his energy levels.

After being put on thyroid medication in June 2018, which he will be on for the rest of his life, Laura and Austin changed Cleatus’ diet.

They began feeding him a different brand of dog food with only two set meal times a day.

After just four weeks, Laura and Austin noticed that Cleatus was much happier, had bags of energy and would even greet them when they got home from work which he never did before.

The couple took Cleatus on walks with their seven-year-old golden retriever, Cooper, and by the end of November he was able to keep up and walk their full one-and-a-quarter-mile route up to three to five times a week.

Now Cleatus weighs approximately 16.8 pounds and Laura and Austin’s friends and family can’t believe he is the same dog.

Laura said: ‘Cleatus is Austin’s dog and he has had him since he was a baby. I see overweight dogs and cats every day with owners who are unaware that it can be fixed. 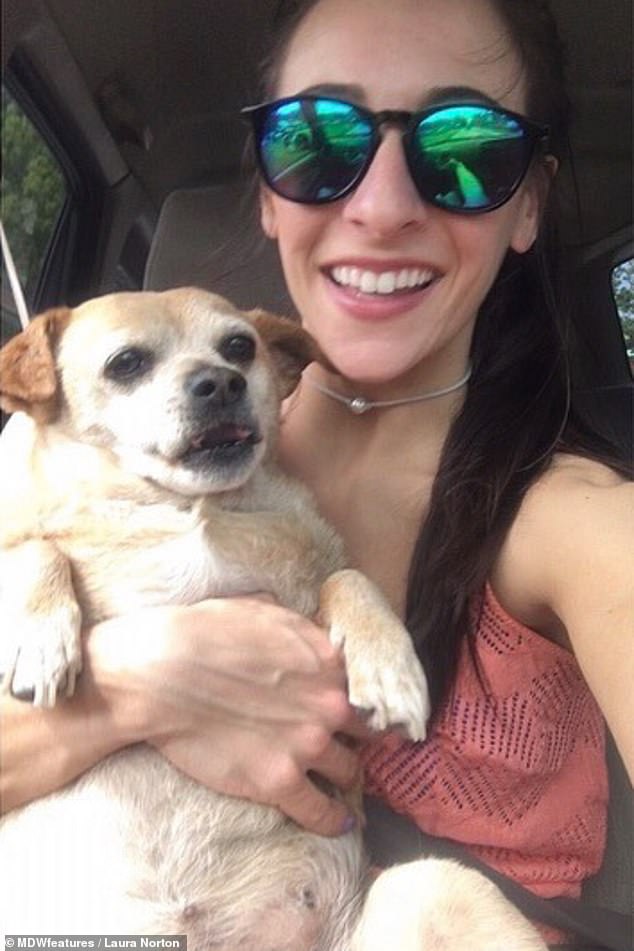 Changes: When Austin’s girlfriend, Laura Norton (pictured), 28, who works as a veterinary technician, moved in with him, they decided to make some changes to Cleatus’ lifestyle 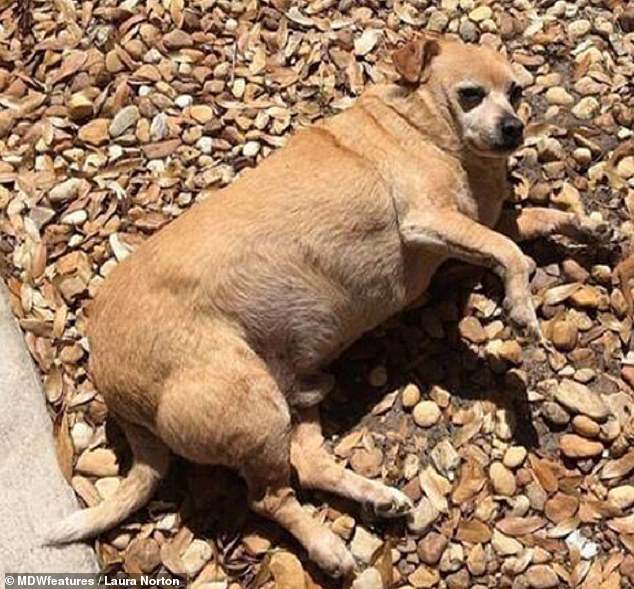 Lifestyle: They started with a dental clean and Cleatus had most of his teeth removed due to dental disease starting to take hold 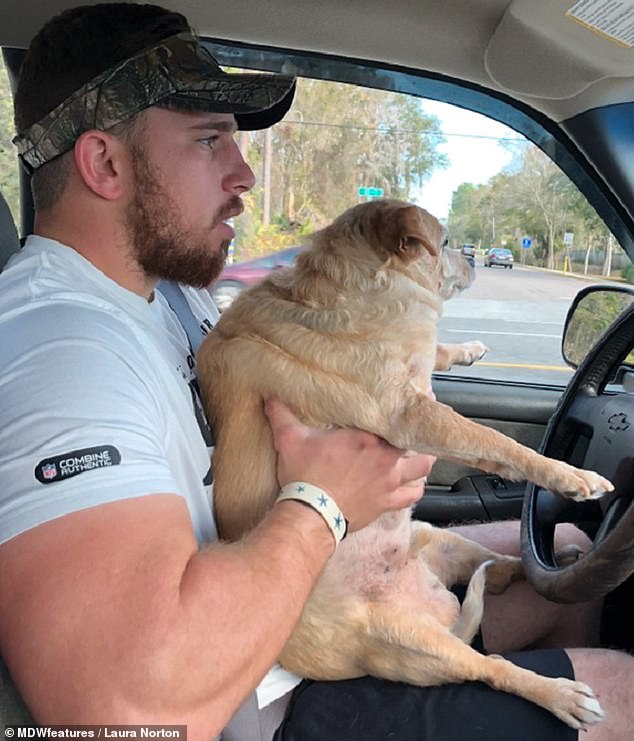 Medical: Cleatus’ blood test results showed that he (pictured with Austin) had an under-active thyroid which was affecting his metabolism and energy levels, so he was put on medication 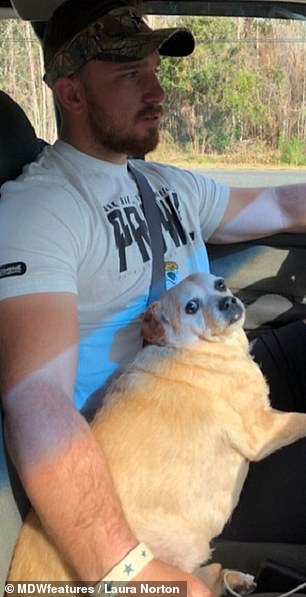 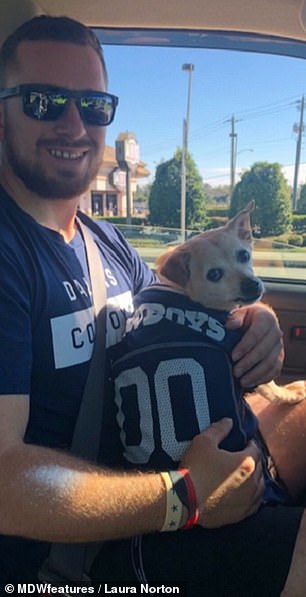 ‘I mean how hard is it to diet ourselves? Most of us humans struggle day in and day out but when I moved in with Cleatus and Austin in May 2018 we made some changes.

‘He was free fed, which means the bowl was just filled up when it was empty and Cleatus ate when he felt like it. 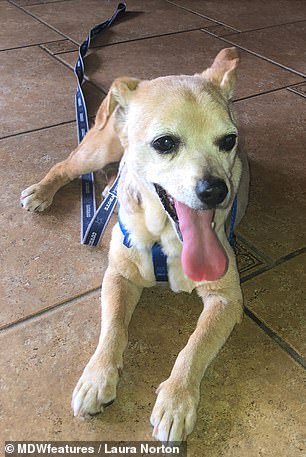 Impressive! One year later, Cleatus weighs approximately 16.8 pounds and has more energy than he ever had before

‘Cleatus got a dental cleaning and had the majority of his teeth extracted because dental disease can cause serious health issues but he can still eat hard kibble just fine even with missing teeth.

‘We also started him on thyroid medication. After running his blood work we noticed he was hypothyroid. This played a huge role in his metabolism and low energy.

‘Before his personality was very bland, he had low energy and would hardly move at all, but he was the best cuddler in the world and still is. Prior to the diet, dental, and medicine Cleatus did not move at all.

‘Austin would have to carry him to the yard so he could go potty. He did the bare minimum when it came to physical exertion.

‘Now his entire life is different. He has a will and purpose to live, he loves to exercise, he plays with toys, he looks forward to having meals, he loves to go outside now and most importantly he is happy.

‘We kept bringing Cleatus on walks with Cooper and we noticed he would cry to get out of the wagon.

‘By the end of November 2018, he was able to walk our entire route that is 1.25 miles. Cleatus now plays with toys, after never in his life showing any interest,’ she added. 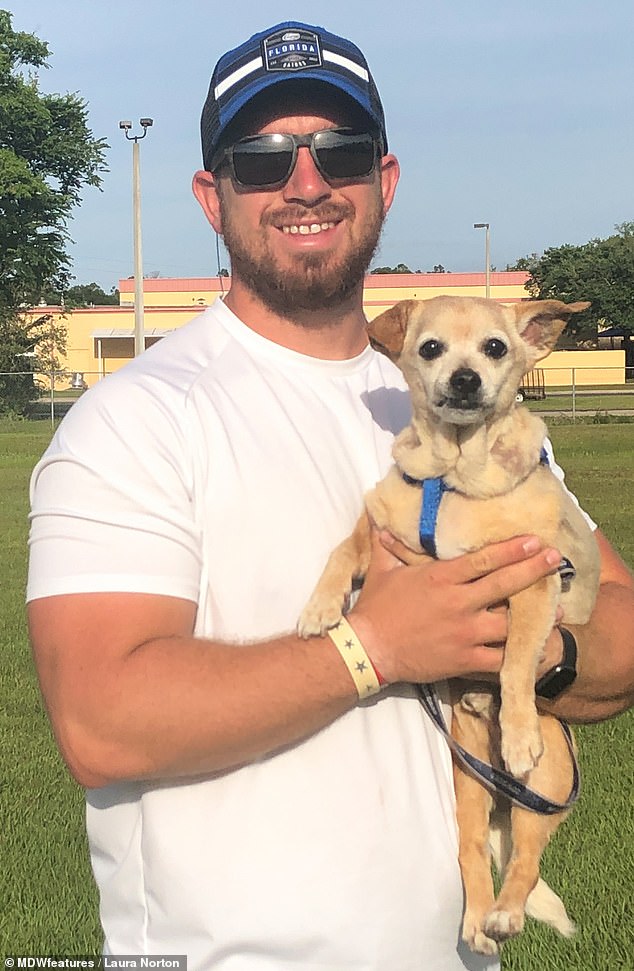 Improving: Seen with Austin during his weight loss journey, Laura said Cleatus’ mental and physical health have improved vastly since they changed his lifestyle 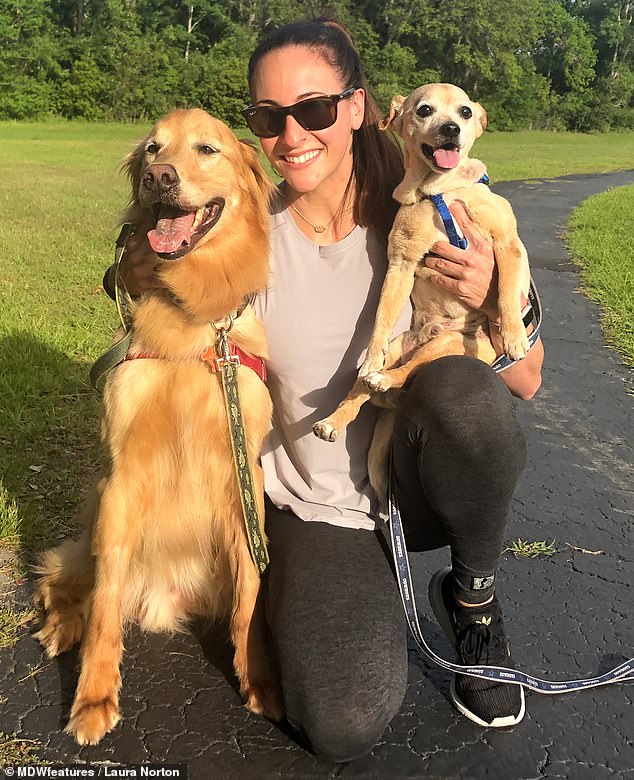 Amazing! Laura (pictured) said she would bring Cleatus on walks with Cooper (L) to get his fitness up, and that he can now walk their entire 1.25 mile route 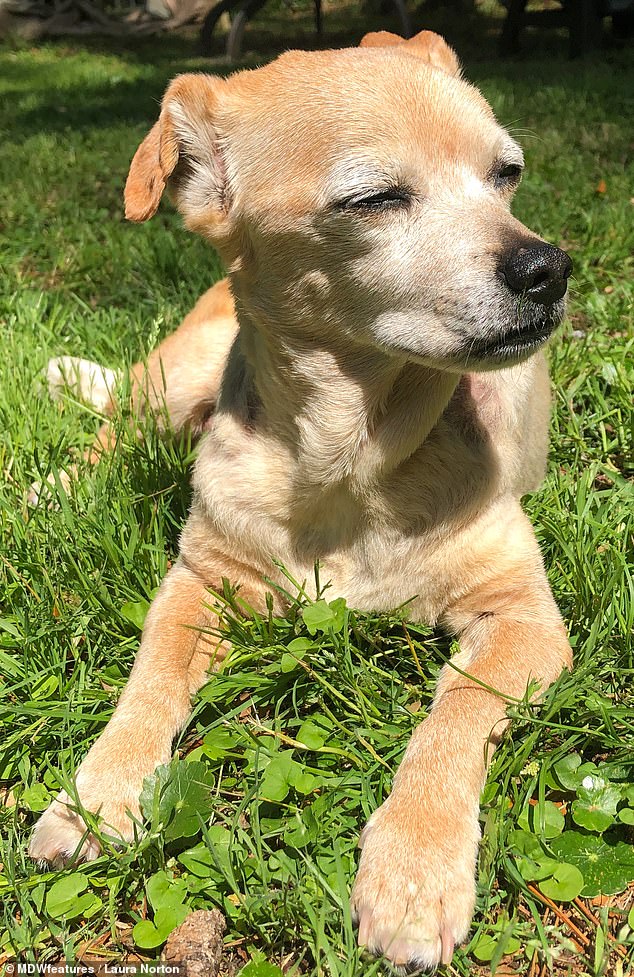 Incredible: Laura and Austin said they are proud of Cleatus’ transformation, as Laura said: ‘Cleatus is an entirely new dog that has all of the energy in the world’

‘Cleatus is an entirely new dog that has all of the energy in the world,’ Laura said.

‘Both his mental and physical health have done complete 180s and he couldn’t be any happier,’ she added.

Instead of being able to eat at any time of day like before, now Cleatus eats a quarter of a cup of food in the morning and then another quarter cup at night, unless he has been on a long walk and then he gets half a cup.

Laura and Austin are so proud of Cleatus’ transformation and Laura shared her words of advice to other pet owners who might be struggling with their pet’s weight.

‘We are very proud of him and happy we were persistent with his plan. When people see him they don’t even believe he is the same dog. They are shocked,’ she said.

‘Get them on a scheduled diet of every morning and every night. When you first start, they may not eat their meal because they are so used to being free fed. Give them a few minutes to eat it and if they don’t, take it away until dinner time.

‘Only allow a few minutes to eat and take the food away, after a few days they will begin to eat on a schedule. Be persistent with long walks three to five times a week.