‘I am sick of the gossip’: Owner of a Sydney mansion that burned in a mysterious blaze hits back at claims the $14 million home wasn’t insured

By Lauren Ferri and Kelsey Wilkie For Daily Mail Australia

The owner of a $14million Sydney mansion which was damaged by a fire has shut down rumours the home wasn’t insured the blaze started in the laundry.

Anita Bhandari, 44, was on her way to Bali when the three-story house on the western edge of Centennial Parklands went up in flames around 8.30pm on November 6.

Nobody was inside at the time and Ms Bhandari’s estranged husband and owner, Tibra Capital co-founder Danny Bhandari, later returned to find 80 firemen and 20 firetrucks battling the raging inferno.

The house was last sold in 2009 for $8million. It was on the market in February with an asking price of $14million but was not sold

Ms Bhandari has since hit back at social media speculation surrounding the fire, saying the house was insured and denied the fire began with a clothes dryer.

‘I am sick of the social media and the gossip,’ she told The Daily Telegraph.

While initial reports claim the home was not insured, the 44-year-old shut down the claims and said she is sick of ‘hundreds’ of nosy people driving past the home.

Mr Bhandari and Ms Bhandari purchased the property for $8million in 2009 but underwent a $6million makeover in 2011.

The property is believed to be one of the most expensive privately owned house fires in Sydney, catching fire just weeks after it was pulled from the market after being up for sale since January.

Fire investigators are under the belief the blaze began as the clothes dryer was left on, but Ms Bhandari said it was a ‘bulls**t’ claim.

‘This is none of anyone’s business. We are not answerable to anyone. It is our business,’ the mother-of-two said.

Ms Bhandari said the family has received lots of support and wants to heal from what has happened and move forward.

‘What do people want to gain from knowing more and more? This happens everywhere,’ she said.

The property featured underground parking, a gym and a media room. It had been on the market for the past nine months for $13.5million before the blaze.

Fire crews, who were called out by a neighbour who thought a tree was on fire at 8.30pm, put the flames out at midnight but stayed on scene until 6.20am the following morning to ensure the blaze did not restart. 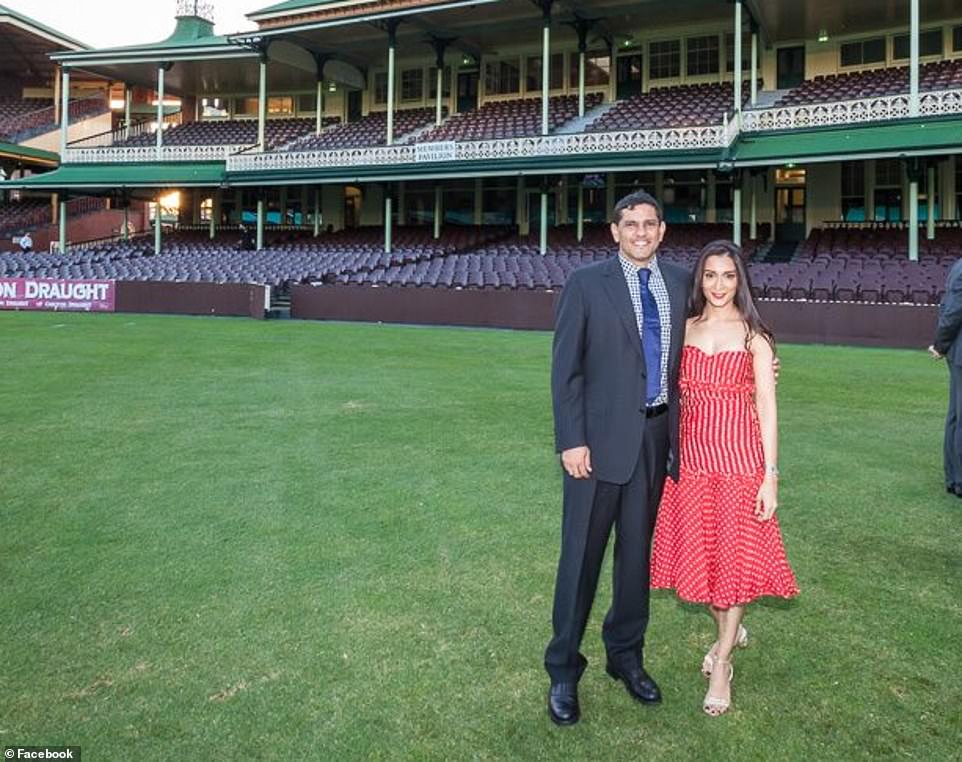 Anita Bhandari (pictured with her husband Danny Bhandari), 44, was on her way to Bali when the three-story house on the western edge of Centennial Parklands went up in flames 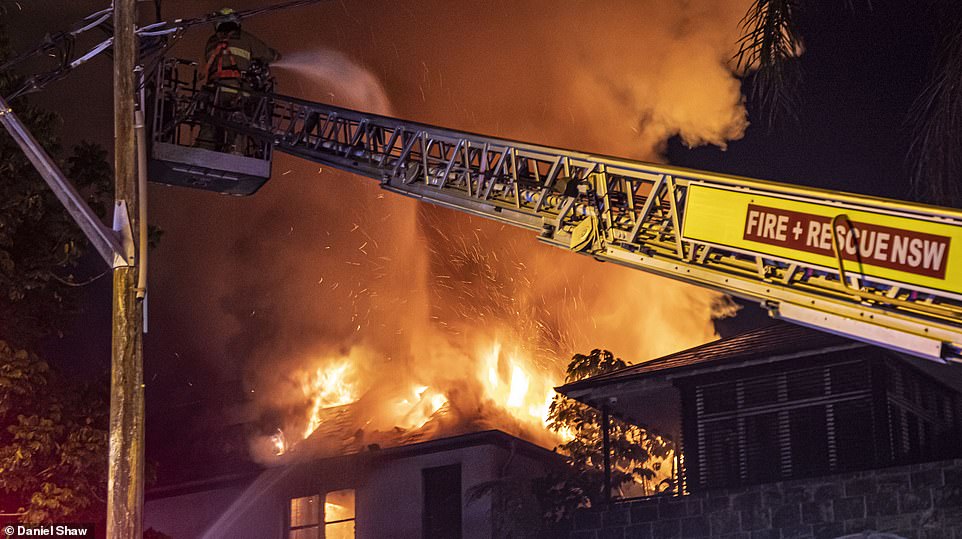 Inferno: The three-storey house (pictured) on the western edge of Centennial Parklands went up in flames at around 8.30pm on Wednesday

Neighbours were evacuated as crews successfully battled to keep the fire from spreading to other houses.

Mr Bhandari, who sits on the board of Venues NSW, has an estimated $32million net worth.

He also sat on the Cricket NSW Board until he resigned in January last year.

Mr Bhandari chose to step down after he was found guilty of avoidable contact by the Sydney Cricket Association Judiciary Committee and suspended for two matches.

He was reported by umpires following a second grade match and stood down from the Cricket NSW board pending the hearing. While he was found guilty, the hearing concluded there was no malice in his actions.

His house was high-tech and included lots of electrical wiring.

A NSW Police spokeswoman said the cause of the fire is still unknown but the investigation is ongoing.

The home on the 800 square metre property was built in the 1908s for jam manufacturer David Boyce. Back then it was single-level with nine bedrooms.

Its heritage features were removed between the 1960s and 1990s.