Petty reason a bike shop owner who went out of his way to follow strict Covid rules so he could stay open in lockdown was hit with an $11,000 fine

A bike shop owner has been slapped with a $11,000 fine for breaching Covid-19 rules despite doing everything in his power to follow health guidelines.

Ryan Billszta, owner of Samson Cycles in Melbourne’s northern suburbs, was fined $10,904 during lockdown despite adhering to Covid safety measures.

Ryan Billszta, (pictured) owner of Samson Cycles in Melbourne was hit with a $10,904 after doing everything in his power to follow Covid-19 restrictions during lockdown

‘We wanted to make sure that we did the right thing from the beginning, to keep everyone happy and keep everyone safe,’ he told A Current Affair.

Mr Billszta is vaccinated and ensured his business had the appropriate work permit.

But his extra measures were fruitless when two Victorian Government authorised officers visited his store in mid-October.

After a brief chat, Mr Billistza recalled the officers appeared friendly and left the bicycle store ‘quite amicably’.

However, two days later the business owner was shocked to find he had received a fine in the mail totalling $10,904 for failing to produce a CovidSafe plan.

A CovidSafe plan is a government-authored checklist that ensures businesses impose measures adhering to pubic health orders to continue operating.

Mr Billszta said he was asked for the documents but wasn’t exactly sure of what paperwork the officers were referring to.

After some research he realised the officers were after a CovidSafe Plan, a paper version of which Mr Billsta kept in his car. 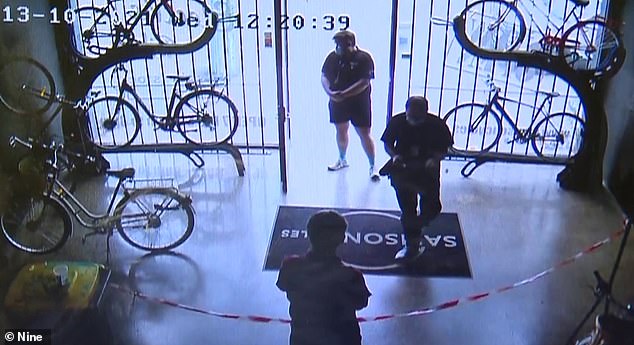 Two government-authorised officers visited the business in mid-October, who Mr Billstza described as friendly, by two days later he received a hefty fine in the mail

Lawyer, Adam Cockayne told A Current Affair the authorised government officers should have approached the business owner in an entirely different manner.

‘What should have happened is that the authorised officer should have explained what the law was and given him the opportunity to show that he had the document or was able to produce it,’ he said.

Mr Billstza said he planned to challenge the fine, but the most important thing to him was keeping people safe at his store.

‘The focus of these rules is to keep people safe. We’ve done that. Producing the paperwork on the spot, doesn’t change that,’ he said.