Russian officials have brought charges against four companies in the Far East which have been keeping about 100 whales in small, crowded pools that environmentalists have dubbed a ‘whale prison’.

The companies have previously been fined for illegal capture and have a history of selling the animals to amusement parks abroad.

This photo was taken in January by activist group Free Russian Whales and shows a whale in a marine containment facility in Srednyaya Bay, near Vladivostok 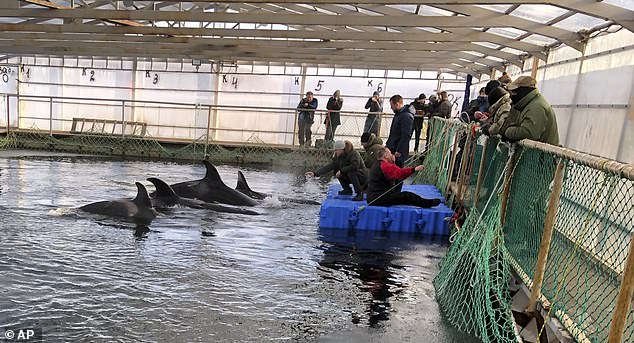 It also confirmed the environmentalists’ claims that the belugas and orcas are kept in cramped conditions in a marine containment facility in Srednyaya Bay, near Vladivostok, and that they need to be released.

The border guards did not specify when that will happen.

The guards appear to be taking a cue from President Vladimir Putin, who last week ordered authorities to investigate the case and release the animals.

Whales are worth a fortune on the black market, up to £4.6million each, and activists believe they were captured for sale to amusements parks in China.

Russian law only allows for the capture of whales for scientific purposes. 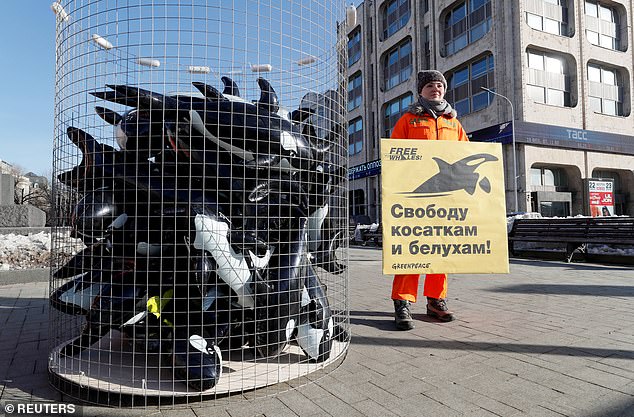 Greenpeace activists in Moscow have been protesting the ‘whale prison’ in the Far East. The placard reads: ‘Freedom to orcas and white wales’ 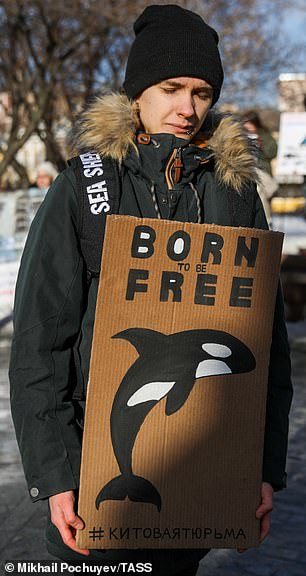 As many as 90 belugas and 12 orcas were originally reported to have been kept in the containment facility. A single whale could sell for as much as £4.6million on the black market

Activists raised the alarm late last year when the whales were captured off the Pacific Coast.

As many as 90 belugas and 12 orcas were originally reported to have been kept in a marine containment facility in Srednyaya Bay, near Vladivostok, but local prosecutors said three belugas appear to have escaped.

Environmentalists also reported the disappearance of one orca earlier in February.

The whales are kept at one location off the Pacific Coast but are owned by four separate companies. Company records and court filings indicate that they are connected.

In an interview with Russian state TV last year, a representative for the facility rejected reports of poor treatment of the animals.

One of the companies unsuccessfully sued the Federal Fishery Agency in 2017 over its refusal to issue it a quota for capturing unidentified marine mammals.

The 2017 ruling shows the company had a standing contract with a company in China’s north east and that the company was unable to prove that the whales would be kept in good conditions and used for educational purposes.

The city of Weihai in Shandong province hosts an ocean amusement park.

The charges come after footage emerged showing a crane lifting one of the whales out of a tank at a fenced off facility near the city of Nakhodka – on Russia’s Pacific Coast and not far from the Chinese border. 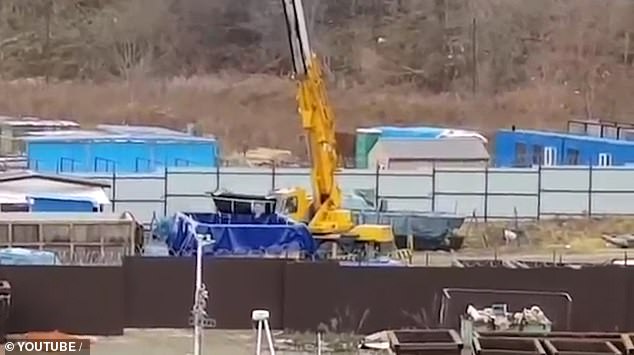 The Russian Border Guards Department confirmed the environmentalists’ claims that the belugas and orcas are kept in cramped conditions in a marine containment facility in Srednyaya Bay, near Vladivostok, and that they need to be released but didn’t specify when 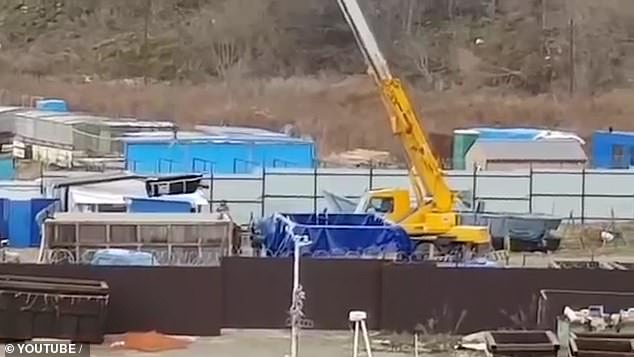 According to the independent newspaper Novaya Gazeta, some of the animals have been at the crowded enclosures since July while local media claim the footage suggests preparations were being made for sending them to another destination

According to the independent newspaper Novaya Gazeta, some of the animals have been at the compound since July while local media claim the footage suggests preparations were being made for sending them to another destination.

Novaya Gazeta’s report said the four companies renting enclosures at the facility exported as many as 13 orcas across the nearby boarder to China between 2013 and 2016.

‘The scale of what is happening here is shocking,’ said campaigning journalist Masha Netrebenko.

From the air ‘we saw that there are loads of white (Beluga) whales in enclosures built in the water.

‘The helicopter couldn’t go very low – because when it was less than 100 metres above the ground, it was entirely loosing control.

‘Apparently these businessmen are so prepared that they even installed jammers. But the picture I have seen has deeply shaken me.’

Ms Netrebenko claimed that nearby there is also a facility trading in seals.

The four companies reportedly involved in the ‘whale jail’ had permission to catch 13 orcas this year.

But prosecutors in Vladivostok believe this was based on catching the animals for conservation or educational purposes.

Checks are also underway on the legality of the tanks where the whales – many of them infants – are held.

Capturing such young whales is banned.

Novaya Gazeta alleged this is the largest number of sea creatures ever to be held in such small temporary enclosures.

China is reported to have some 60 marine theme parks with another 12 under construction. 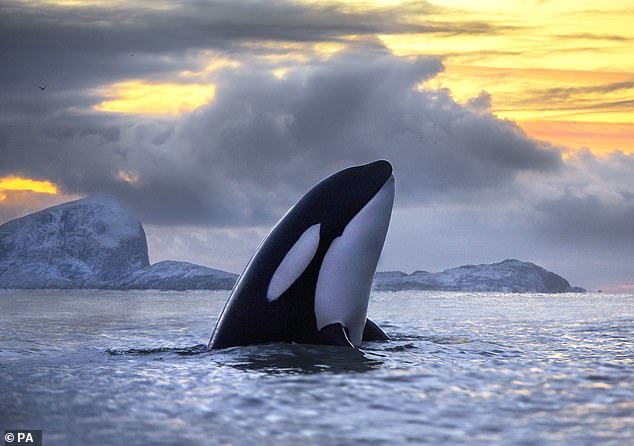 This summer the Russian prosector general’s office called on the Interior Ministry to launch a fraud probe on the capture and sale to China of seven orca whales between 2012-15.

There are also claims of a scam by which whales are loaned rather than sold to evade tough environmental laws.

The campaigning organisation’s research coordinator Oganes Targulyan was quoted as saying: ‘Catching them at this tempo, we risk losing our entire orca population.’

He stressed that ‘the capture quota now is 13 animals a year, but no one is taking into account that at least one orca is killed for every one that is caught.’

There is high security around the ‘whale jail’.

One photographer Nina Zyryanova said she had her camera taken and its memory card stolen on Saturday as she investigated the site.

Netrebenko said: ‘I have seen orcas, white whales and whales in the ocean many times and can be confident that only the ocean can be their home, not these tiny enclosures where intelligent creatures are stuffed like fish in a tin.

‘I don’t know who you need to be to put them here and …. to allow trading them as soulless pieces of meat’.

She claimed the trade was for ‘big money’ and is a ‘profitable business tied to people particularly close [to the Kremlin]’.

However exact links to high places in Russia are unclear.

She said orcas are ‘the only living creatures apart from humans’ with such strong family instincts.

‘Orcas also feel very strongly about each other and can even die from sadness if something happens to a member of their family.’