The Oxford fans taunted the visitors with a ‘sing when you’re winning’ line and those who were here to watch Manchester City laughed. Tuesday night’s visiting team know very little but winning these days and the fringe players looking to prove a point to Pep Guardiola saw the side home with minimal fuss.

By the end, Guardiola had introduced Raheem Sterling and Ilkay Gundogan and it was one his first choice predators – Gabriel Jesus – who broke the deadlock with his first ever goal in this competition. But blooding a group of teenagers carried no material risk. Riyah Mahrez finished things off midway through the second half and City sailed through to the fourth round.

City’s ten changes from the side that annihilated Cardiff City on Saturday brought Phil Foden and after 37 fairly sedentary minutes from him, the next great English hope provided the first half’s defining moment. The 18-year-old’s flat, 35-yard diagonal pass behind the Oxford defence was seized by Brahim Diaz, whose shot looped into the path of Gabriel Jesus. The forward seized the opportunity to score from close range. 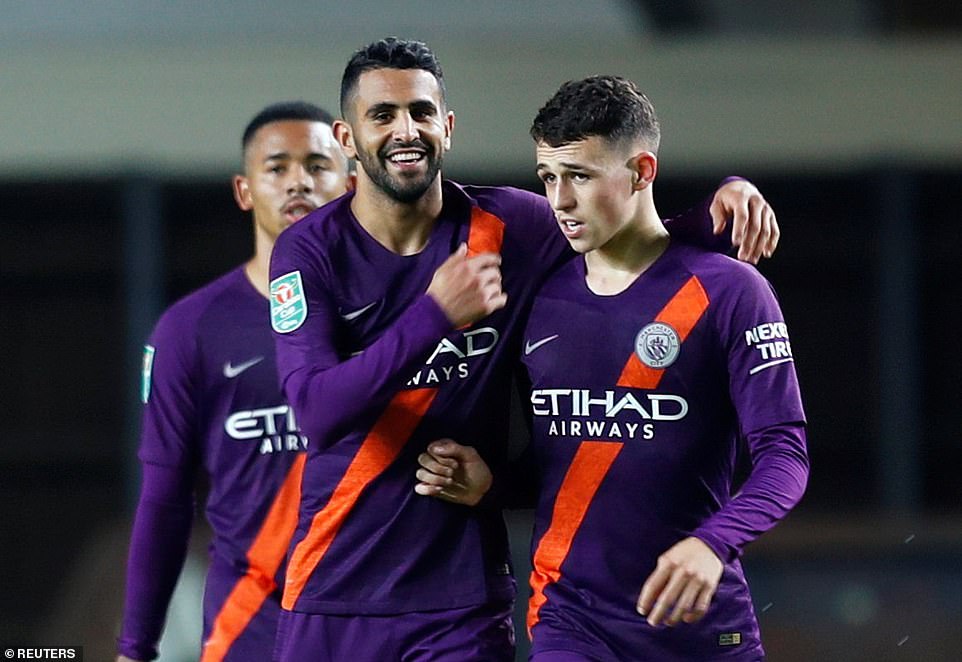 Gabriel Jesus, Riyad Mahrez and Phil Foden (left to right) did the damage by scoring City’s goals at the Kassam Stadium 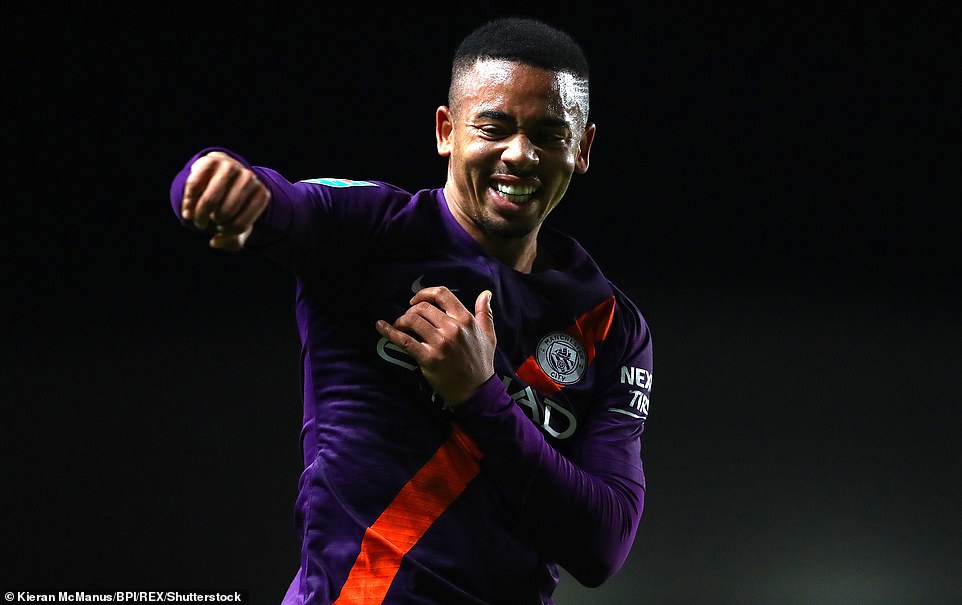 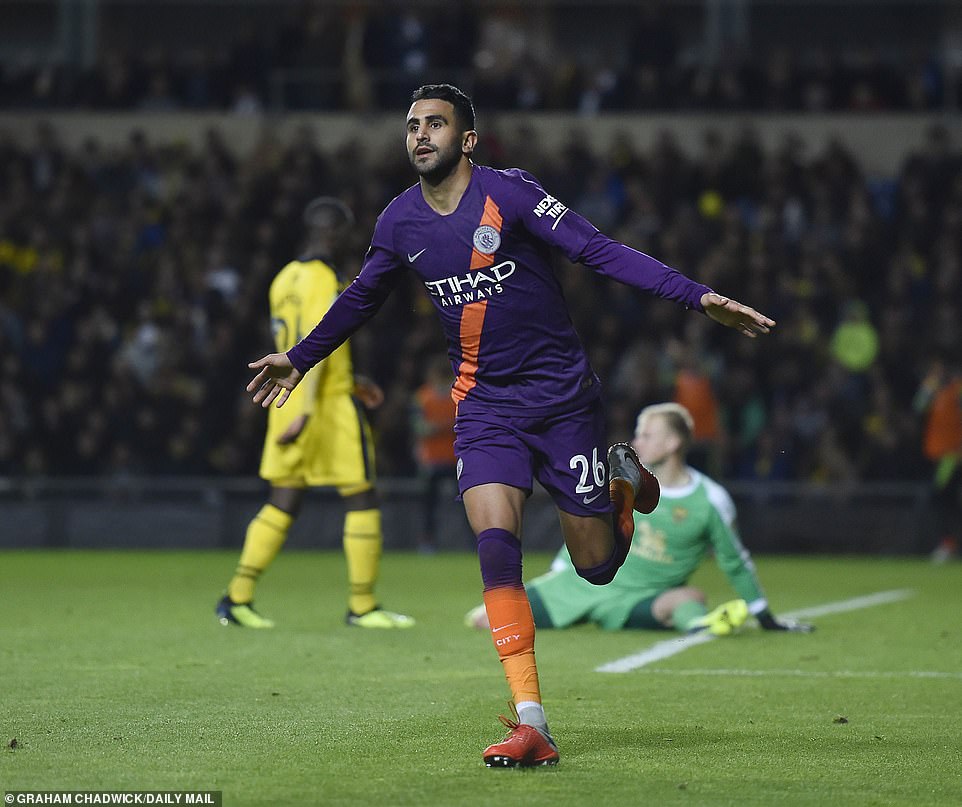 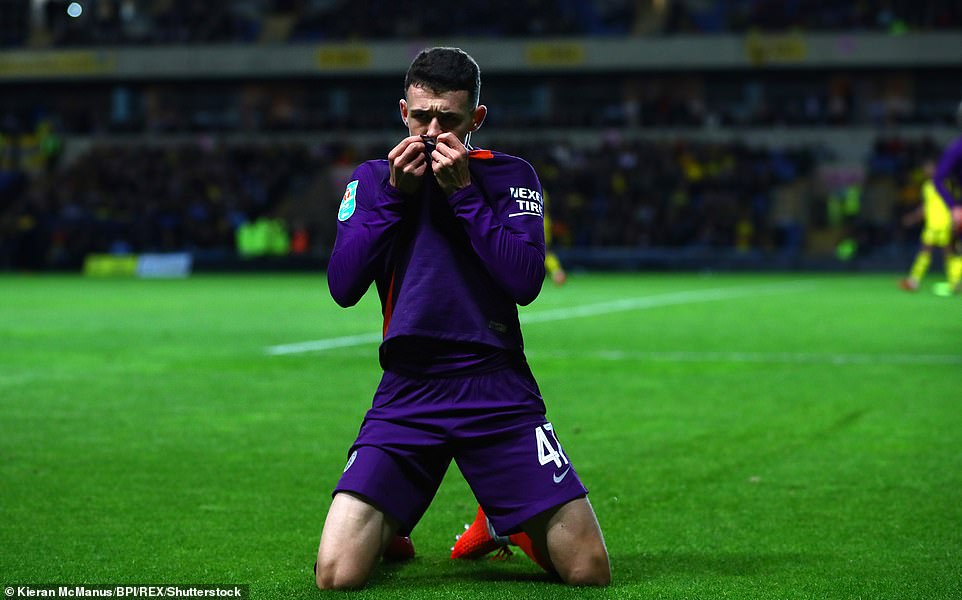 It was Diaz who ran the first period, though. The 19-year-old is a classic City Spanish acquisition: small, technical and the product of sporting director Txiki Begirisatain’s network when signed from Malaga for £200,000 as a 16-year-old. He was busy, unpredictable, looking for possession for more than any other player as City established an immediate superiority which made this look like an exhibition match.

Diaz’s left flank was the route that City sought, with some liquid football at times as he linked with David Silva down that flank. The pair of them had already produced a sweeping move from which a Jesus goal was ruled offside when the breakthrough came.

There were other City incursions. A 30-yard effort from the impressive young Ukrainian left back Oleksandr Zinchenko forced Jonathan Mitchell to dive sharply to his right to save. Silva also pounced on mishit shot from Zinchenko but skewe a shot around Mitchell’s left post.

Oxford provided the briefest of dangers. The former Liverpool midfielder Cameron Brannagan snapped at the heels of John Stones, who was in holding midfield role, and played in forward Jon Obika, who was fractionally offside.

Brannagan was considered a talent at Liverpool and there was an expression of interest from Barcelona, though Brendan Rodgers’ coaching staff felt he needed to show more personality and Jurgen Klopp let him go. His new manager Karl Robinson also expected to be travelling up in the world when he managed the MK Dons side who beat Louis van Gaal’s Manchester United 4-0 in the second round of this tournament four years ago.

But the arrival of new Thai owner Sumrith Thanakarnjanasuth here has brought turbulence. A string of senior executives have left and the supply line of Premier League under-23 players which brought success under Michael Appleton has dried up. The team second bottom of League One, with one win in nine, were looking well short by the interval. 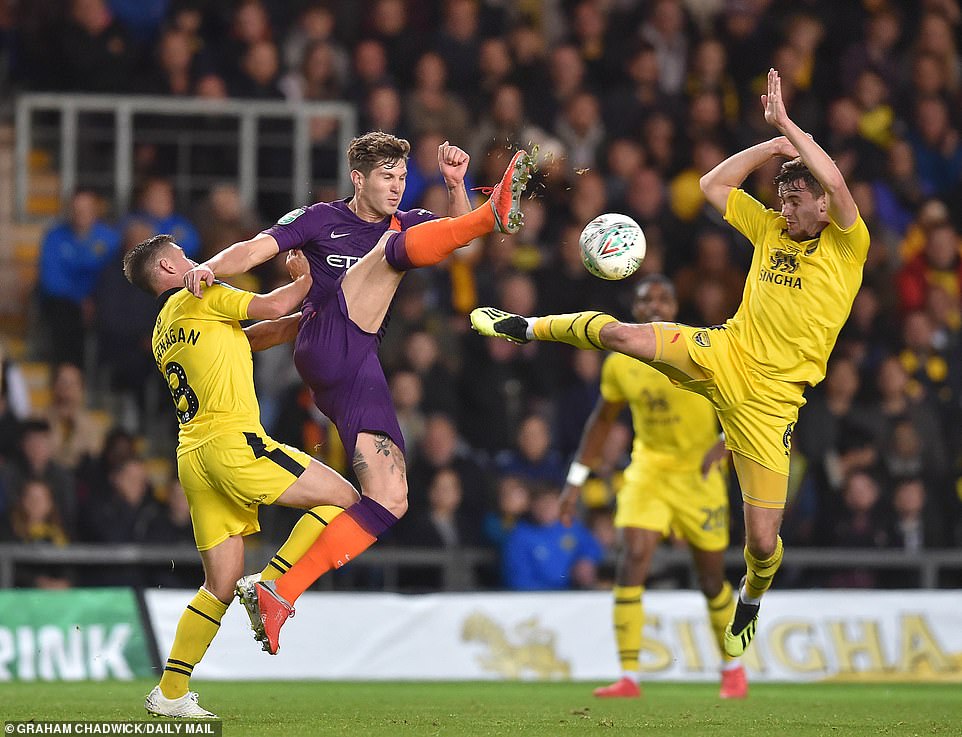 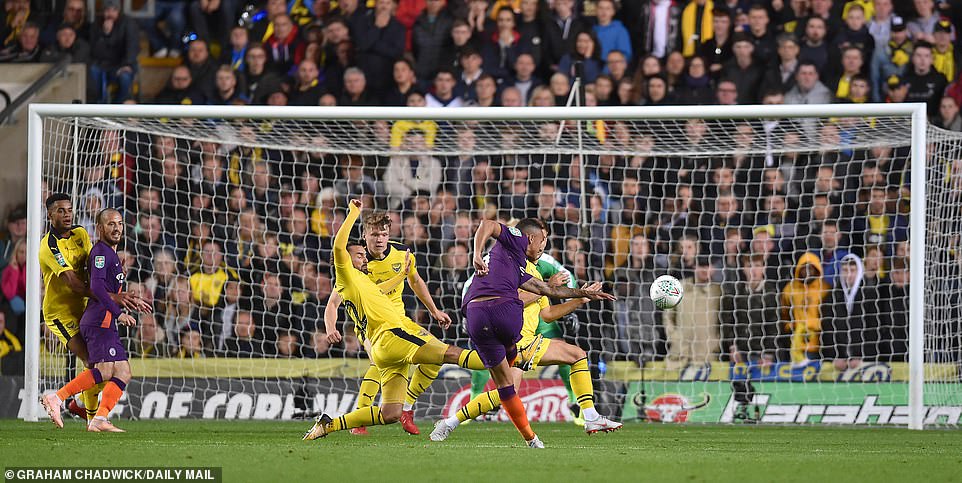 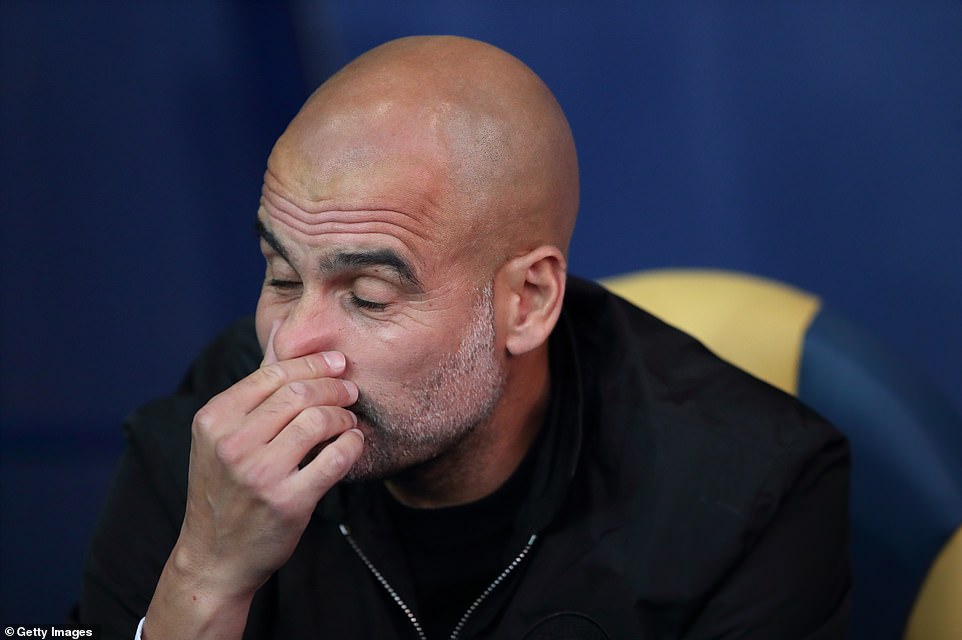 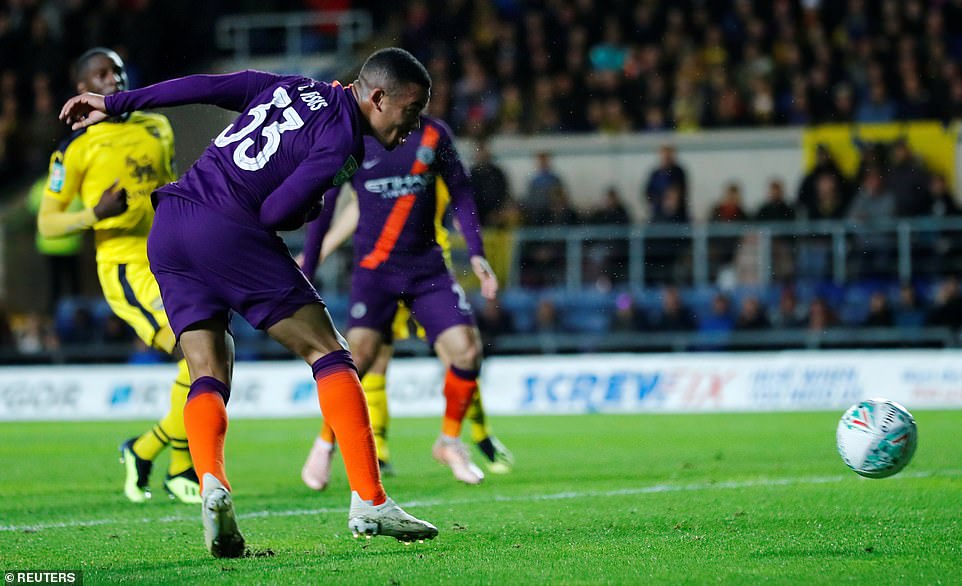 Mahrez struck another effort wide and Diaz took a knock to the foot early in the seconds half as he made to shoot and was replaced by Raheem Sterling on 55 minutes.

For as long as the lead was marginal there was an element of risk and City did seem aware of that in the second half. Oxford’s Shandon Baptiste has pace Danilo was booked from bringing him down as he threatened to accelerate in on goal just beyond the hour mark.

Robinson did inject more life into the side at the interval and Stones briefly looked vulnerable to the attentions of the Oxford midfield, as as they pressed more in the second half. Ricky Holmes, who worked hard all night, raced ahead of Riyad Mahrez to put City’s goal in his sight. But his speculative 35-yard effort, trickled wide. The effort seemed to say everything about the home side’s lack of belief in their ability to take City’s defence on.

The game should have been out of sight when Danilo’s low cross from the right reached Foden on the opposite side of the box, 20 minutes from time, but he cracked it first time into the side netting when he might have done better.

Foden made amends five minutes later – sending Mahrez away down the City right and he pounced on the opportunity. Guardiola returned to his dugout, well satisfied. His young players had passed the test.

Foden underlined his class by adding a brilliant third goal at the death: his first for the club. Taking a Sterling ball into his he cracked a first time, left-foot shot form the left hand side of Oxford’s box beyond Mitchell and slid to the City fans in jubilation. 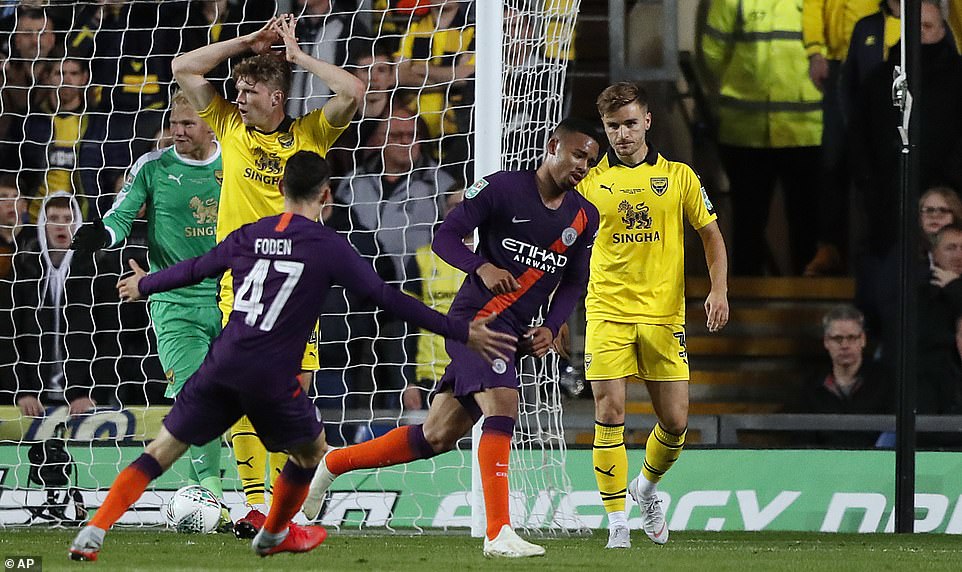 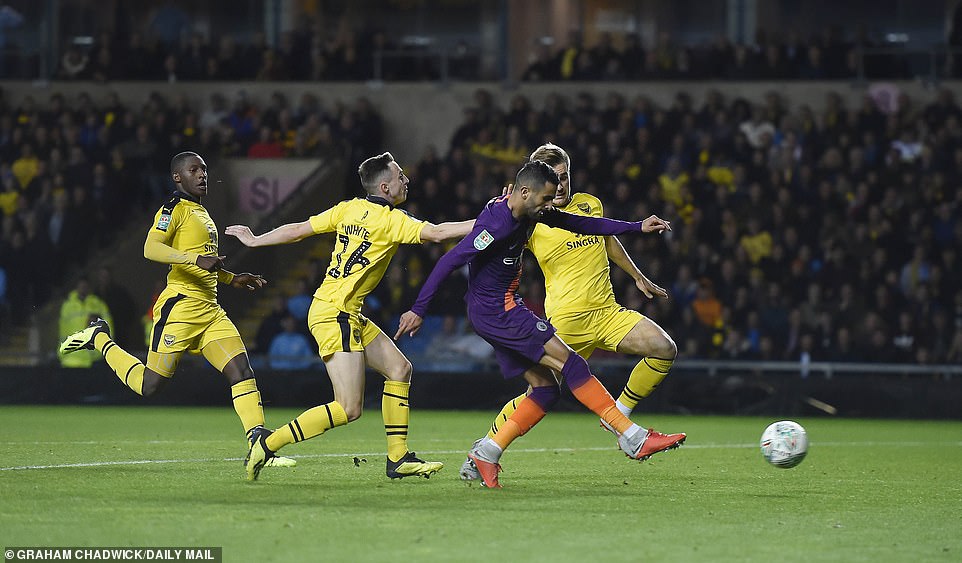