A 10-year-old boy from Pennsylvania has shared a message about his rare genetic disorder in a touching video.

Giovanni Hamilton suffers from one of the rarest conditions in the world, Schwartz-Jampel syndrome, known as SJS.

In the video, Giovanni explains what his condition is and says it, ‘doesn’t make me less of a person because I can still do what everyone else does, I just have to do it a little different.’

Giovanni let’s viewers know that it hurts his feelings when people think he’s a baby or that his younger sister is older than him because he’s smaller than her.

He also adds: ‘And it hurts my feelings when people think I don’t have teeth or that I’m not smart because I’m in a wheelchair.’

He says he wishes people saw him as a funny, smart, kind 10-year-old boy who likes football, pizza, cookies and ice-cream. 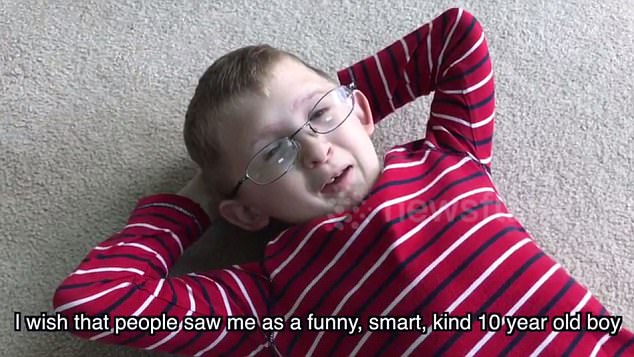 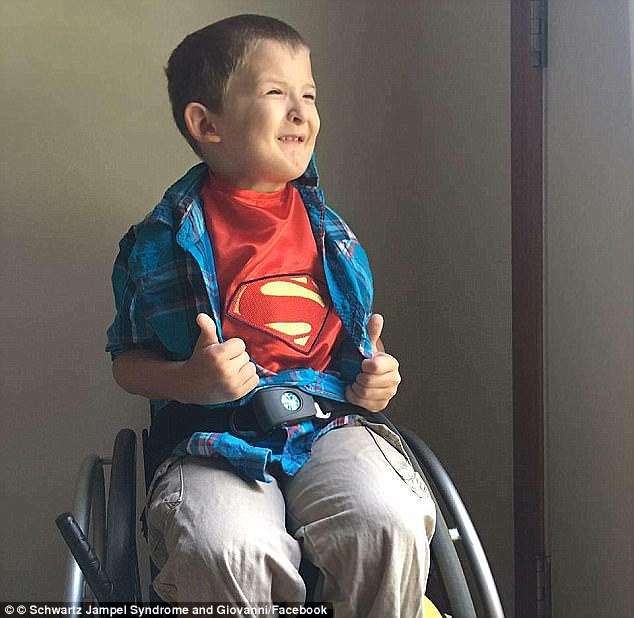 Schwartz-Jampel syndrome, which is an inherited disorder, causes muscle stiffness and weakness.

There are two types of Schwartz-Jampel syndrome – one which becomes apparent in later childhood, and another which is apparent at birth.

The disorder, which cannot be relieved by medication or sleep, leaves muscles permanently tense.

Other symptoms can include joint deformity, a curved spine and a short stature.

SJS is a rare inherited disorder that causes permanent muscle stiffness and weakness. It’s also known as a type of dwarfism – keeping muscles tight and restricting them from growing normally

Giovanni was diagnosed with SJS at two years old and takes six medications for the pain every single day.

He’s undergone ten surgeries, including hip and jaw reconstruction surgery. He underwent eye surgery last month to help the muscles in his eye and prevent any blindness.

A Facebook post says: ‘The results are absolutely amazing! His incisions look amazing above his eyebrows and hopefully there will be minimal scaring.’

Giovanni curates all of his Facebook posts, tweets and YouTube videos with his mom, Shannon. She said Giovanni is very active on all platforms and even enjoys commenting back to some of his viewers. They’ve started the hashtag #TeamGiovanni.

‘For being smaller than everyone, boy he’s got the voice and personality to make up for it’, she told Dailymail.com. 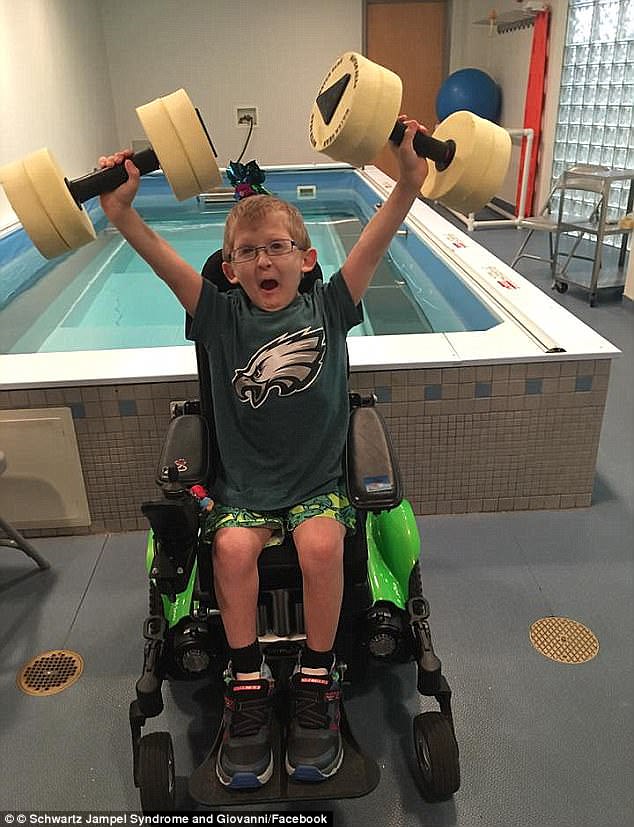 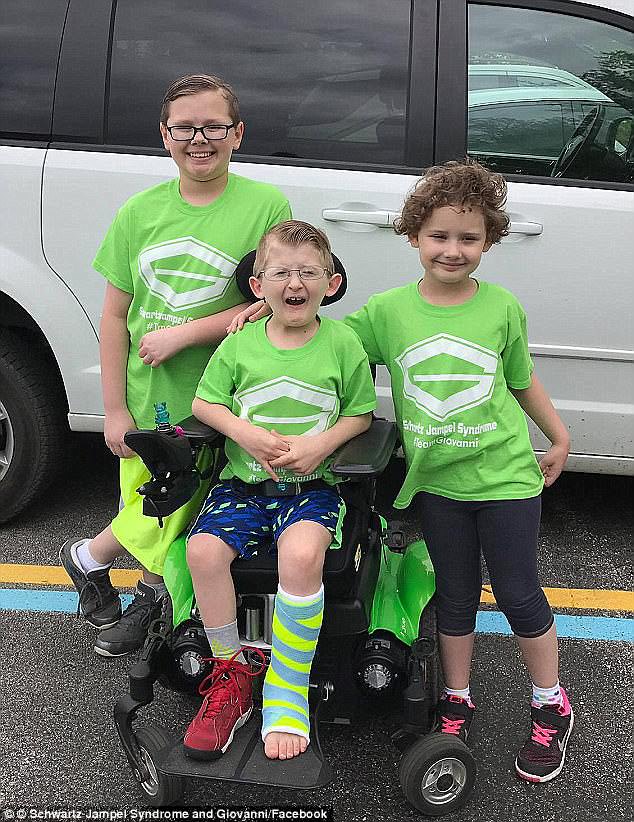 The middle child of three, Giovanni loves to play with his siblings. He said it hurts his feelings when people think his sister is older than him because he’s smaller 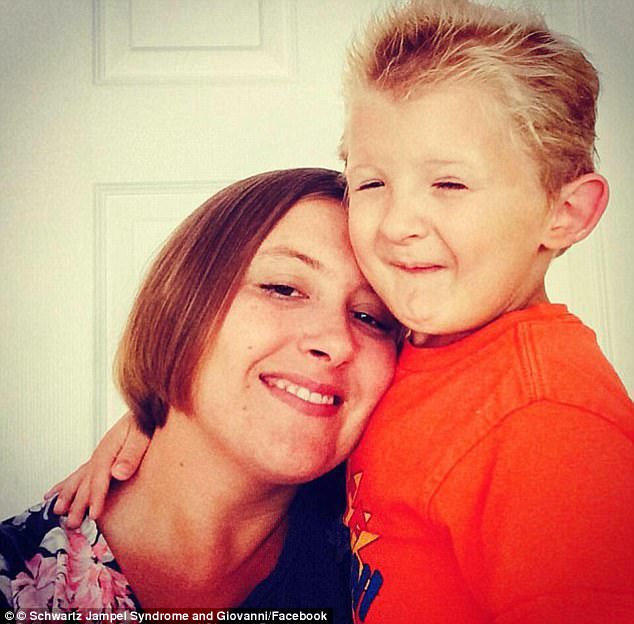 Giovanni curates his social media platforms with his mom, Shannon. They also do exercises at home together when Giovanni has the day off from physical therapy

Doctors told the family there are only 88 reported cases of Schwartz-Jampel syndrome in the world, and the type that Giovanni has, has never been seen before.

The fourth grader doesn’t let this disorder stop him. On his YouTube channel are videos of him performing a magic show in his school’s talent contest and playing in the pool with his two siblings.

His mom said he has surpassed doctor’s expectations. After getting his body cast off from his hip replacement surgery, Giovanni was up and about within four hours, taking at least 10 steps. And though he’s not permitted to play sports, he walks far more than he was projected to.

The 10-year-old goes to therapy twice a week and does exercises at home each day involving stretching, swimming, and a medical bicycle.

He posts videos just being himself to raise awareness of people with disabilities and show that he’s just like any other kid.

His bright personality and positive attitude have combated bullies and even gotten the attention of TLC’s special Twice in a Million and his idol, wrestler John Cena, through the Make-a-Wish Foundation.

Giovanni hopes that his videos will make people realize that their words matter. 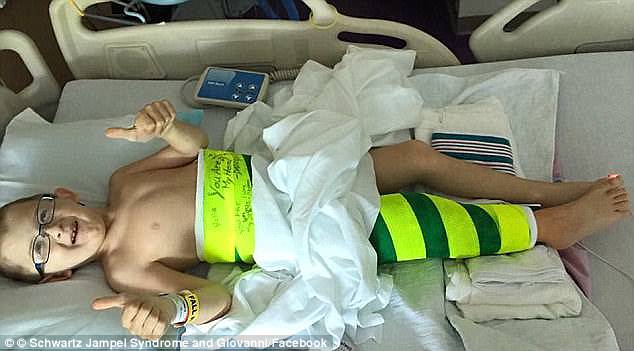 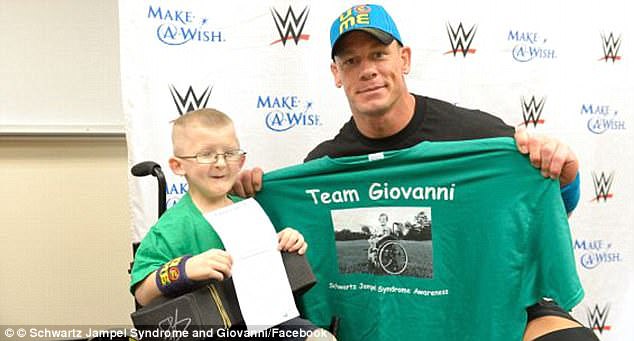 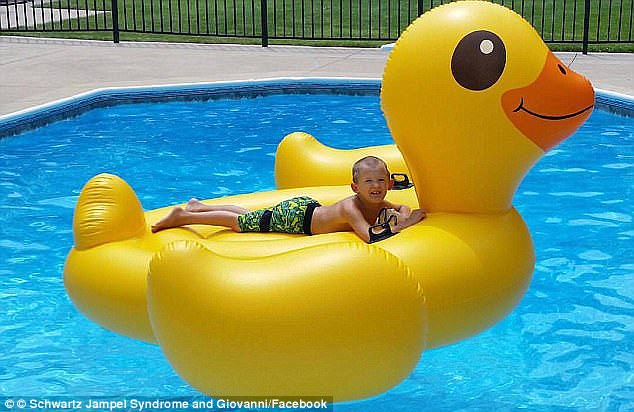