Big Fat Gypsy Wedding star Paddy Doherty’s family have reacted angrily after hearing that the man who crashed into and killed their relative will not face a jail sentence.

Today Billy Budd, 31, avoided serving any prison time for his part in the death of cart racing champion Michael ‘Mikey’ Connors – but was handed a driving ban.

Mr Connors, 30, was catapulted into the air when Budd struck him on the A2016 Eastern Way dual carriageway in Thamesmead, London, in July last year.

Mr Connors, who was dubbed ‘King of the Road’, came crashing down on the tarmac and died at the scene from severe head injuries.

Around half a dozen family members and friends from each family were seen at the sentencing hearing at Southwark Crown Court today.

Members of Mr Connors’ family clutched a large photo of their lost loved one surrounded by clouds and heavenly rays and looked visibly angry.

After the sentencing, a teary-eyed female member of Mr Connors’ family approached Budd and said: ‘You killed my brother.’

While Mr Connors’ wife Elizabeth said her ‘world has been turned upside down’ in an emotional statement read by prosecutor Philip Stott. 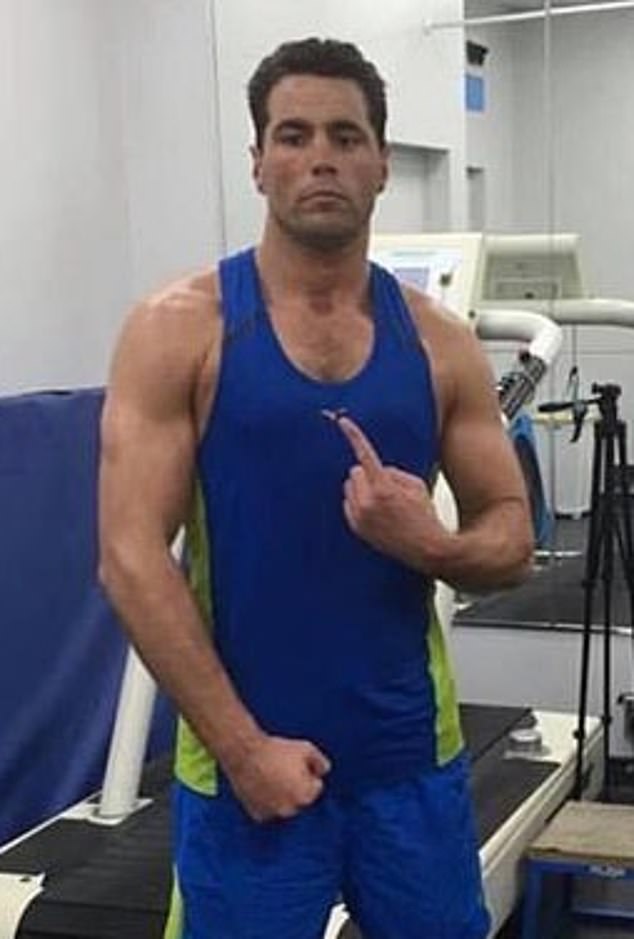 Michael ‘Mikey’ Connors, 30, was competing in a horse-drawn cart race when Budd’s BMW ploughed into the back of him and killed him 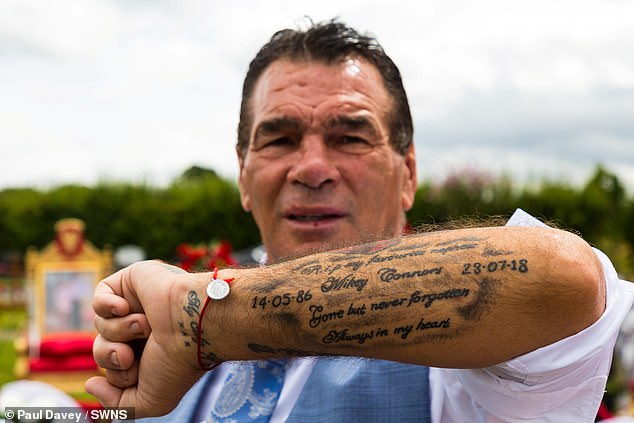 Mr Connors was the nephew of Big Fat Gypsy Wedding star Paddy Doherty, who is pictured with a tribute tattoo at his funeral last month

Mr Connors was struck on the A2016 Eastern Way dual carriageway last July while racing his cart.

Carts can be used on highways in the UK so long as the driver complies with the Department for Transport’s Code of Practice for Horse-Drawn Vehicles, reports the Highway Code.

This code includes keeping the horse under control at all times and ensuring a harness is properly fitted and in good working order.

Mr Connors’ £12,000 prize horse, named Tony Montana, had to be euthanised on the carriageway after the sports car crushed its back and pelvis.

Budd, 31, tried to flee but was chased by a witness who forced him into the central reservation and called police.

Mr Stott said: ‘The witness shouted at the defendant “do you know what you’ve done, you’ve killed somebody, go back”.

‘The defendant appeared confused and shaken. The second witness told the defendant to park his car and go back, which he did.

‘Mr Budd did not initially identify himself as the driver of the vehicle to police, instead describing himself as a witness.

‘He was approached again by an officer due to his demeanour and then identified himself as the driver. He was taken from the scene to a police vehicle.

‘He said that he moved across to the left hand lane because he knew that the lanes merged ahead.’

Judge Joanna Korner said: ‘I describe this as a tragic case. It could be said that all such cases of this kind fall into that category.

‘His death had been devastating for the whole family. His mother described him as the organiser of the family whose siblings relied on.

‘It is right to say that any sentence passed on the man responsible for bringing about this situation cannot regrettably change the reality or the loss that Mr Connors’ family is suffering.

‘What caused this accident was clearly the defendant becoming distracted by something, nobody knows – least of all him, so that he utterly failed to see Mr Connors.

‘Remorse is the strongest mitigating factors and in this case there is no doubt in my judgement that this defendant is deeply and genuinely remorseful.

‘It’s remorse, in my judgement, not brought about by self pity but because he does understand what he has done to the Connors family.’

The court heard how Mr Budd, who bowed his head, while his sentence was handed down, had a ‘personality change’ since the crash – becoming ‘withdrawn’ and a ‘depressed young man to the extent that he is on medication.’

A probation report read by the judge recommended not sending him to prison.

It said: ‘There is nothing the court can do to Mr Budd that will punish him more than he is already punishing himself as he relives the events of that day.

‘It would serve to exacerbate the problems and increase the risk of him committing suicide.’

‘I cannot begin to imagine how hard this has been for them. I also feel remorse for the horse as well.

‘My heart breaks for his family and friends and I often wish it had been me who died.’

Defending, Dickon Reid said: ‘He is a sensitive man, a kind hearted man, not a jack the lad.’

Mr Budd was ordered to complete two 18 month long community orders requiring him to complete 300 hours of unpaid work for causing death by dangerous driving and 100 hours for damaging property, in respect to the horse.

Both are to run at the same time. He was also disqualified from driving for two years.

More than 100 mourners gathered to remember father-of-two Mr Connors at his burial at Epsom Cemetery, near the race course that hosts the Derby, last month.

Speaking at that anniversary Paddy, who won Celebrity Big Brother in 2011, said: ‘Mikey was a great man. He was an all rounder. he was a worker, he was a horseman and a gentleman as well.

‘Even the horse game has gone down hill since he’s gone because of the tragedy – every traveller in the world it has affected.

‘There was a horse competition in Dublin in January just for him, because he was popular, he was a legend. He was more than one in a billion, he was one in a trillion.’