Padel: the world’s fastest-growing racket sport loved by the likes of David Beckham and Andy Murray

In the searing heat of the Middle East, a Spanish team clashes with Argentina in the final of the World Cup, with the Argentines storming to a 2-1 victory.

This is not some prophetic predication of the winner of the Fifa World Cup in Qatar – the globe will have to wait another 18 days for that.

Instead, it is the result of one of the world’s fastest growing racket sports which counts the likes of David Beckham, Lionel Messi, Andy Murray and Zlatan Ibrahimovic among its 25 million-strong army of fanatics.

Padel, a hybrid of tennis and squash, staged its 16th world championships earlier this month in Dubai – just days before the beautiful game’s sporting spectacle kicked off on the opposite side of the Persian Gulf in Qatar.

And it’s a sport that is growing in popularity in Britain, with Team GB even sporting a squad at this year’s world championships, placing a respectable 14th.

Now a new global tour aims to take the sport beyond its usual heartlands of Spain and Argentina – where only football is more popular in terms of participation – to everywhere and everyone.

England football legend David Beckham is a padel fan. He is pictured playing the sport in Miami in March 2021 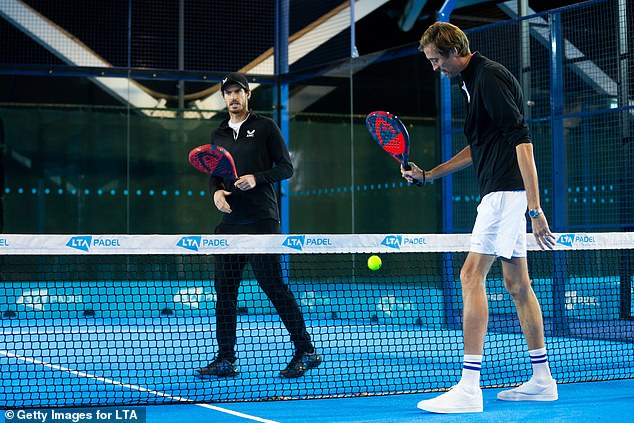 What is padel and how is it played?

Padel is a combination of both tennis and squash. It is usually played in doubles on an enclosed court roughly 25 per cent smaller than a normal tennis court.

As in squash, the ball can be played off the glass walls, creating longer and more exciting rallies and some extraordinary shots.

With less distance to cover, Padel is less physically demanding than ordinary tennis, making it accessible to more people.

The aim of the sport is to win at least two out of three sets, with the scoring system exactly the same as the one used in tennis.

Each match begins with a serve diagonally across the court – but unlike tennis, this is done underarm.

Points in the fast-paced rallies can be bagged by the opposition if the ball bounces twice on the court, the ball strikes you or a team or the ball hits the wire fencing or another fixture before over the net. 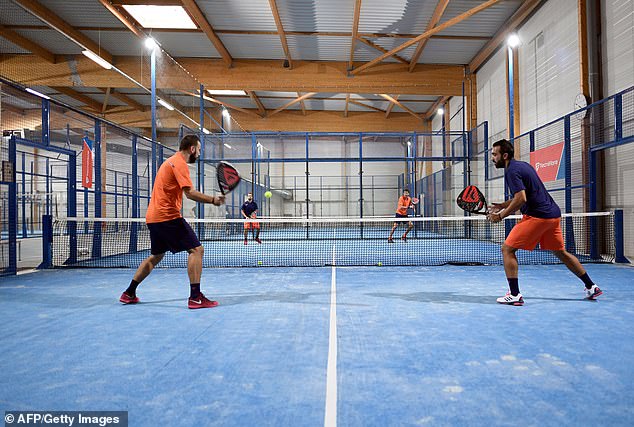 Where and when did padel begin?

The first-ever padel court was built by Mexican businessman Enrique Corcuera in his holiday home in Acapulco in 1969.

But the roots of the sport date back to the 19th century, when passengers on British cruise ships played a similar sport with tennis rackets. And in 1910, a game of ‘platform tennis’ become popular in New York and Washington, with paddles replacing tradition tennis rackets.

But when Mr Corcuera invented his version of the sport, he surrounded his court with walls and a metallic fence of up to four metres high (13.1ft).

However, the sport started its global journey in 1974, when Spanish entrepreneur Alfonso de Hohenlohe, a friend of Enrique’s, decided to import it to Spain’s Costa del Sol, building two courts at the exclusive Marbella Club.

A year later, and the sport was discovered by Argentine millionaire Julio Menditenguia – who played it while visiting Marbella.

He took it back to his home country where padel exploded in popularity. It now has more than 10,000 courts. While in Spain, the sport is one of the country’s most popular, boasting 20,000 courts and an estimated six million active players. 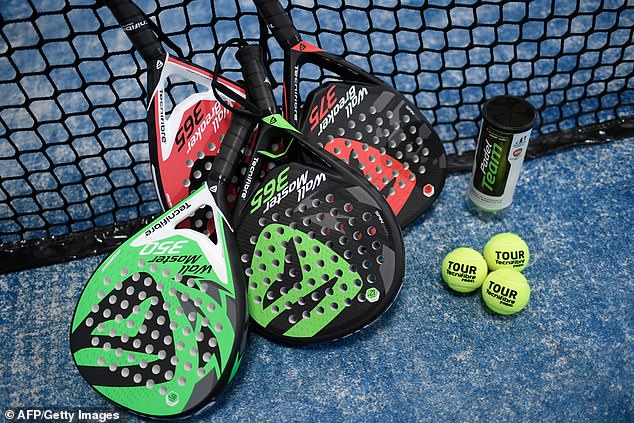 Which famous faces are fans of the sport?

Former England and Manchester United icon David Beckham is among the fanatics to love the sport. He tried out Padel while in Miami last year and was apparently a natural.

Retired French footballing super star and World Cup winner, Zinedine Zidane also loves the sport, opening the ‘Z5’ Padel centre in Provence in November last year with the public able to book a court for 90 minutes for around £10 each.

Fellow tennis royalty Rafael Nadal, Serena Williams and Novak Djokovic also see the value in either playing or investing in the growing sport.

Liverpool FC manager, Jurgen Klopp had a padel court installed at the club’s training ground after his staff and players discovered the game while on a training camp in Tenerife. 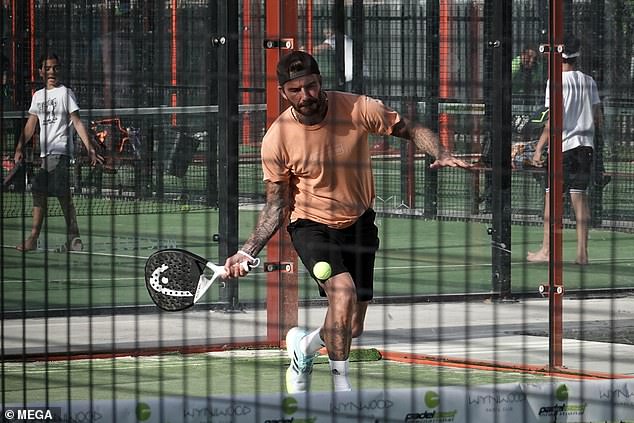 Getting involved: David threw himself into the sport, which is commonly played in the United States, after admitting it was his first attempt 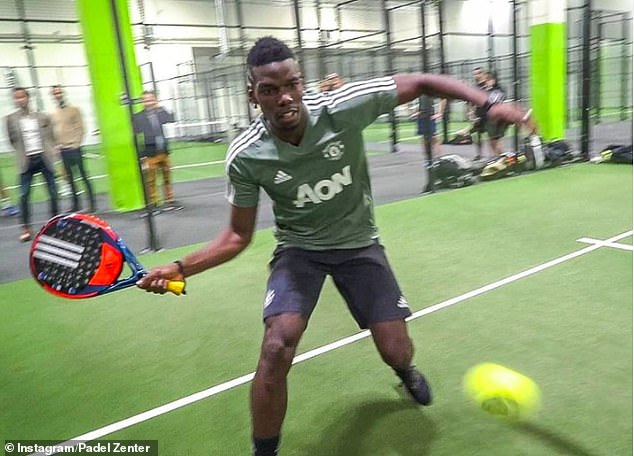 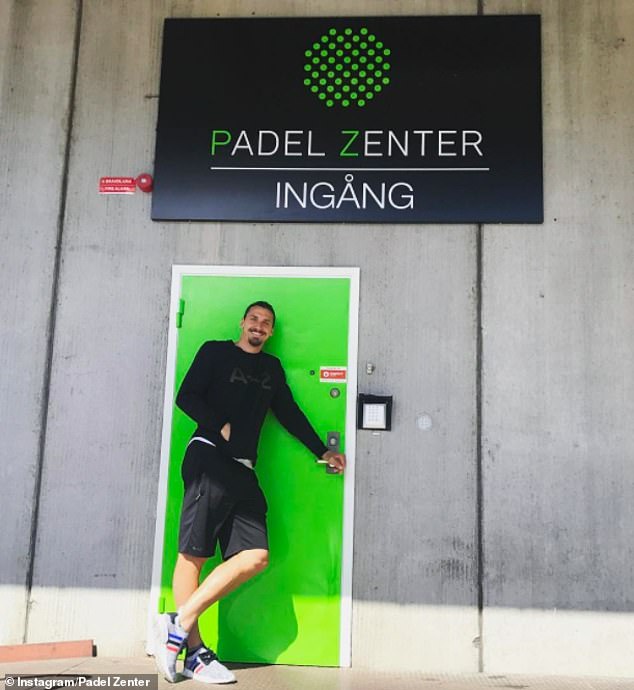 His assistant Pep Lijnders joked that Klopp is ‘fanatical’ about playing and ‘starts to walk around like Conor McGregor’ if he wins too many games.

Swedish star Ibrahimovic has poured his own cash into opening a series of Padel Zenters across Europe having been himself converted to the sport.

His erstwhile Manchester United team-mate Paul Pogba even gave him a hand at one of the centres.

What about in the UK? Where is padel played?

Padel is booming in popularity in the UK, with courts dotted around England, Scotland and Wales.

There are 210 court spread across 80 venues. But the Lawn Tennis Association – which is the sport’s governing body and runs Wimbledon – has plans to boost the number of courts to 400 by the end of next year, up from 90 in 2020.

Latest data shows that there are more than 89,000 active players, with about 15,000 playing every month. Tom Murray, head of padel at the LTA said these figures were promising.

‘Given the stage of development we are at in this country versus padel on the continent, participation numbers are healthy, but are also reflective of the number of courts available,’ he said. ‘In the Netherlands, for example, there are currently 600 courts and a monthly participation player base of 100,000, which helps to demonstrate the potential that exists for continued growth.’

He added: ‘Padel is an exciting and innovative sport that’s fun, flexible and easy to play. The fact that you have celebrities playing padel helps brings increased visibility and awareness to the sport in Britain.’

An interactive map showing where the sport is played is available here.

Padel: The booming racquet sport enjoyed by celebs and athletes

Quite simply, Padel is a mixture of tennis and squash.

It’s played on a 10m by 20m court enclosed by glass walls and metal fencing and is usually played in doubles rather than singles.

The enclosed space and the ability to play shots off the glass means the ball rarely goes out of play, creating longer rallies.

Serving is underarm and the points system is the same as in tennis. The balls used are similar to tennis balls but the racquets are solid with no strings.

There are over 25 million Padel players worldwide, with roughly a 50-50 male-female split.

Though the sport was invented in Mexico in the 1960s, it’s biggest in Argentina and Spain at present but growing in popularity worldwide.