Pair of golfers hit consecutive holes in one

IT might be unlucky for some – but for these two amateur women golfers the 13th hole proved extraordinarily fortunate.

Yesterday, the two friends clinked champagne glasses as they recounted their feat at East Berkshire Golf Club in Crowthorne.

Founded in 1903, the 18-hole course winds through mature woodland, crossing ditches and many areas of heather and gorse.

They were in a group of four who were all square during a friendly match as they teed off on the 13th hole – a normally ‘hellish’ 203-yard par-three over a deep ditch.

But their lot was instantly improved as they were directed to a temporary tee that meant they no longer had to hit over the obstacle.

With a handicap of 36, Mrs Mattey – who had taken a 20-year break from golf to bring up her two children – was first to take out her pitching wedge and take her shot.

She said: ‘I was just thankful I hit it straight, which is nothing short of a miracle in itself. We heard the rattle as it hit the pin, but we just assumed it had bounced back by a foot or so.’

Next up was Mrs Shine, an experienced golfer of 25-years with a handicap of 31, who swung her pitching wedge to hit the ball true and sweet as it bounced on the green.

But it wasn’t until the pair walked on to the green that they realised what had happened.

Retired bookkeeper Mrs Shine said: ‘My partner said Jayne had got near the pin so I needed to hit a good shot – normally I’m just happy if I just get it on the green!

‘As we were coming towards the green I heard all the commotion… and saw two balls in the hole.

‘We did high fives and probably a little dance – I can’t remember because it was just so lovely.’

The grandmother-of-six added: ‘It was unbelievable really. I’ve got a hole-in-one about 12 years ago, but they don’t come around too often. 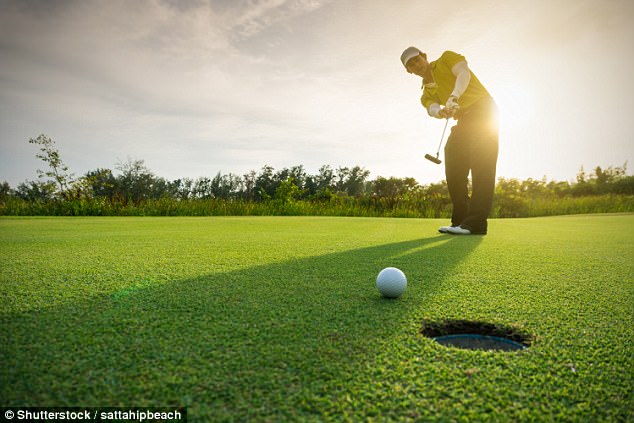 ‘But I can also play particularly badly – luckily that wasn’t the case on Saturday. It was just totally unexpected.’

Mrs Mattey, a career coach who only joined the club in April, said: ‘It was amazing and it’s certainly brought us closer together. We are playing again next week now, she might be my lucky charm.’

She said: ‘The 13th hole normally lives up to its name – it’s hellish. You have to get it up and over the ditch. Luckily we were on temporary greens which were further on over it.

‘But that shouldn’t take anything away from it. It’s like in football – a goal’s a goal, even if it’s taken from the penalty spot.

‘The club gave us a bottle of champagne afterwards – all we need now is a plaque next to the hole!’

The National Hole-In-One-Registry has calculated the odds of two players from the same foursome acing the same hole as 17 million to 1.