A Christian of Pakistani origin claims he had his nose broken by a gang of Muslims who attacked him for displaying a cross and poppies on his car.

Tajamal Amar, 46, who fled Pakistan to escape violence, also suffered several lacerations to the head and body after being knocked out cold outside a fast food restaurant.

The food delivery driver believes that a group of Muslims were responsible for the assault outside the Red Chilli restaurant in Littleover, Derbyshire, on October 20.

He claimed that the men had taken offence as he proudly displayed two large poppies on his silver Toyota, which also had a cross dangling from the rear-view mirror. 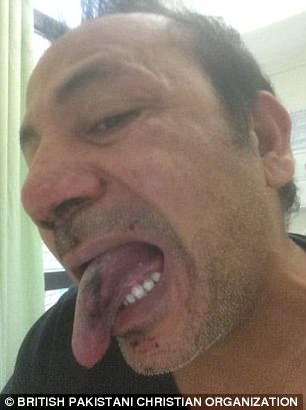 Tajamal Amar, 46, who fled Pakistan to escape violence, suffered a broken nose, several lacerations to the head and body 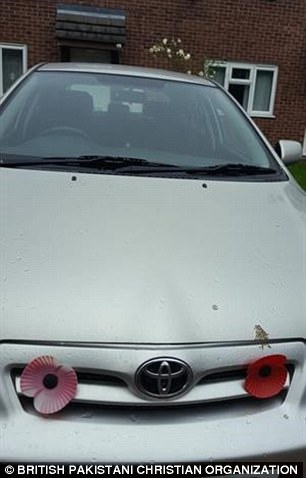 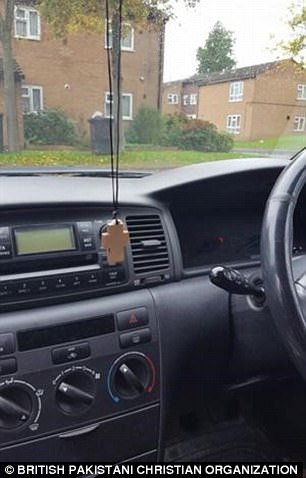 He says he was attacked because of the poppies at the front of the car, and the cross hanging inside the interior

The father-of-one was knocked unconscious and rushed to Royal Derby Hospital, where he woke up five hours after the attack at around 8.45pm.

He believes that he was hit on the top of the head, and then was beaten further as he lay on the floor.

Mr Amar, of Derby, said: ‘Several times, local Pakistani people in Derby havetaken offence from the fact that I am Christian.

‘When they first find out, many stop talking to me. My wife and I have often been shunned.

‘On the day of my attack the visible display of a cross in my car and two poppies just below the front bonnet, triggered the violence against me. 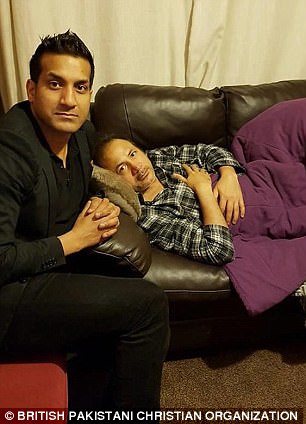 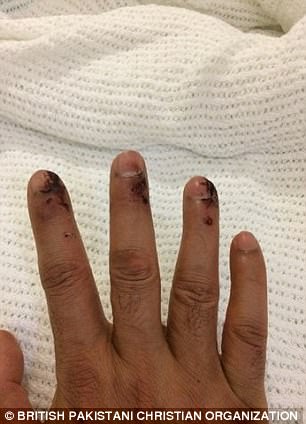 Mr Amar wants to leave Derby because he no longer feels safe, but he tragically left Pakistan after being shot by Muslims there after refusing to convert to Islam

‘I know this, because for a few days before the attack the same men, glared at me after they noticed my Christian paraphernalia.

Now Mr Amar wants to leave Derby because he no longer feels safe, but he tragically left Pakistan after being shot by Muslims there after refusing to convert to Islam.

‘I fled from Pakistan to escape violence such as this, but more and more the same violence is coming into Britain.

‘Freedom of religion should be the right of any British citizen but today I feel unsafe, even then nothing will stop me going to church.

‘I will pray for my attackers and hope they will change their hard-lineapproach to faith which is very dangerous for our society.’

Wilson Chowdhry, Chairman of the British Pakistani Christian Association, said: ‘This unprovoked attack on a Christian for simply displaying a cross and two large poppies is an example of the religious intolerance that some strands of radical Islam promote in Britain. 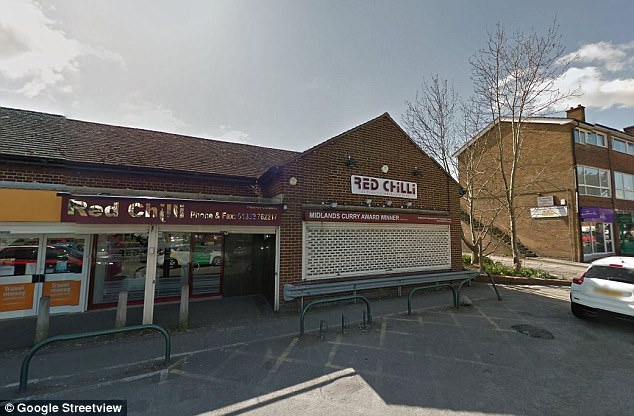 The food delivery driver believes that a group of Muslims were responsible for the assault outside the Red Chilli restaurant in Littleover, Derbyshire, on October 20

‘An innocent man has been hospitalised, he has had to take several days off work, and now he is living in fear of further reprisals, simply for adhering to the Christian faith.’

At the time of the offence, a spokesman for Derbyshire Police said: ‘We were called to a report of an assault outside the Red Chilli restaurant, in Littleover, at around 8:45pm.

‘It was reported that a 45-year-old man had been kicked and punched.

‘He was hospitalised at the Royal Derby Hospital with a broken nose and we have not yet arrested anyone in connection with the assault.’