Five policemen fired dozens of times into a parked car at point-blank range in Pakistan, killing four people including a 12-year-old girl and her parents.

The officers now face murder charges after the incident in the eastern city of Sahiwal last month, during which a family friend was also killed.

Officers then reached inside the car, around the bodies of Mohammad and Nabeela Khalil, their daughter Areeba and their friend Zeeshan, to pull out three surviving children.

The children, all under the age of 10, were found abandoned at a petrol station some distance away, the BBC reported.

Footage of the killings taken in broad daylight by shocked witnesses went viral in Pakistan – sending Prime Minister Imran Khan scrambling to quell anger over a police culture of impunity that is now being threatened by social media.

In the footage, police approach the innocent family who were inside the white car and shoot dozens of times at point blank range 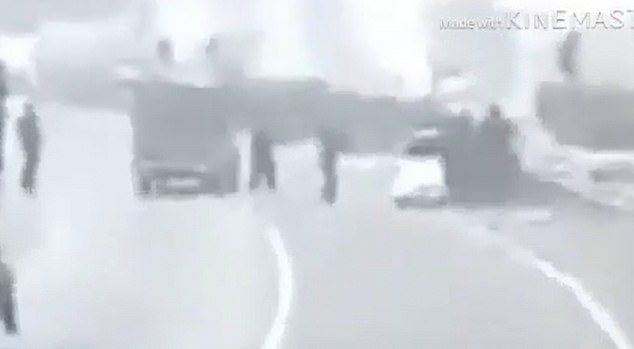 After the incident they pulled three crying children, the oldest of whom was nine, out of the car 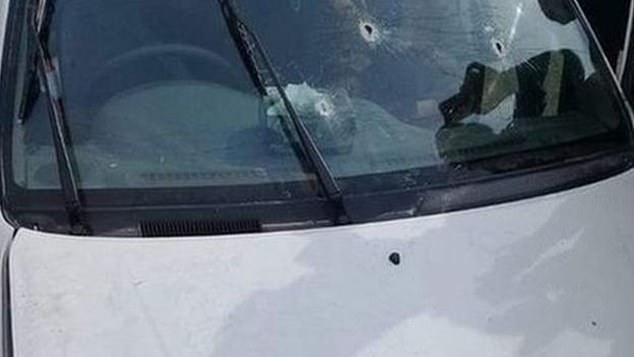 Mr Khan tweeted that he was shocked ‘at seeing the traumatized children who saw their parents shot before their eyes’.

Thousands have been gunned down in recent years across Pakistan in so-called ‘encounter killings’ – incidents where suspects allegedly resist arrest, are slain, then later identified as terrorists to boost statistics.

Nine-year-old Umair Khalil survived alongside his two younger sisters. He said police shot at the family, who ran a grocery shop, even as their father offered them a bribe and pleaded to be let go.

Umair said the group, from Lahore, had been travelling to a family member’s wedding police stopped them at a toll booth.

‘My father told them to take our money and not to shoot their guns. But they started firing,’ Umair said in the video broadcast widely across Pakistan news outlets and social media. 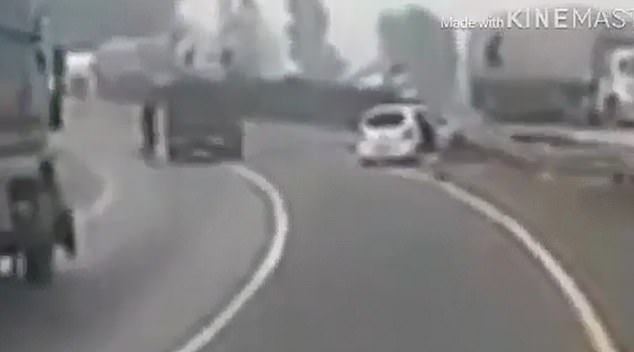 Survivor Umair Khalil, 9, told journalists that police shot at the family, who ran a grocery shop, even as their father offered them a bribe 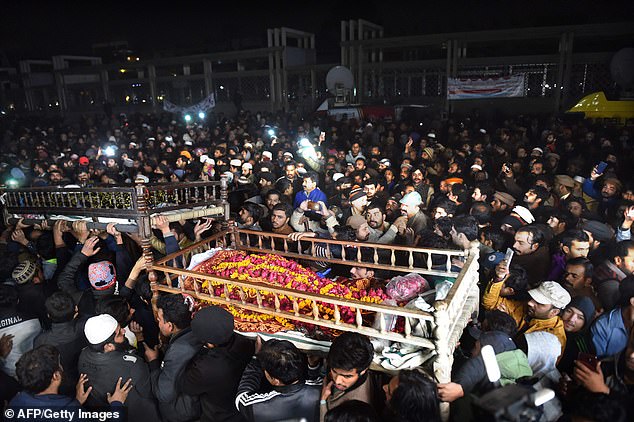 Five policemen fired dozens of times into a parked car at point-blank range in Pakistan, killing four people including a 12-year-old girl 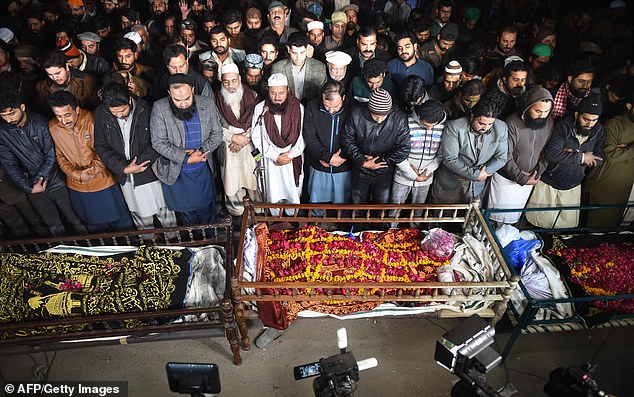 After footage of the killings went viral in Pakistan, the Prime Minister was left scrambling to quell people’s anger

Police initially defended their response saying terrorists with links to the Islamic State group were in the car using the family as a human shield.

But this ‘encounter’ was fundamentally different to others – it was filmed on mobile phones and the videos posted online.

Authorities have since backtracked as furore grew with the prime minister vowing to mete out ‘exemplary punishment’ to the guilty. The five officers were hit with murder charges and protests erupted in nearby Lahore. 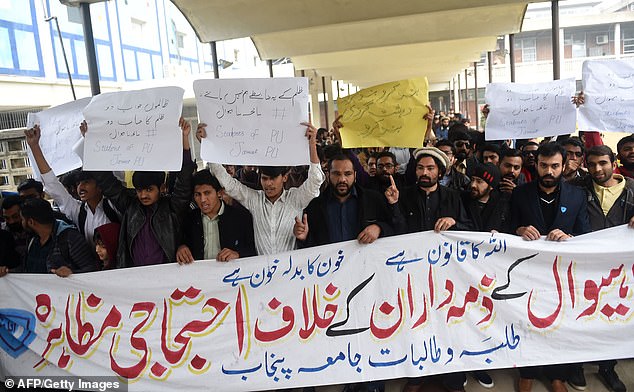 Students protest in Lahore against the killing of a family, who were gunned down in a police encounter in nearby Sahiwal 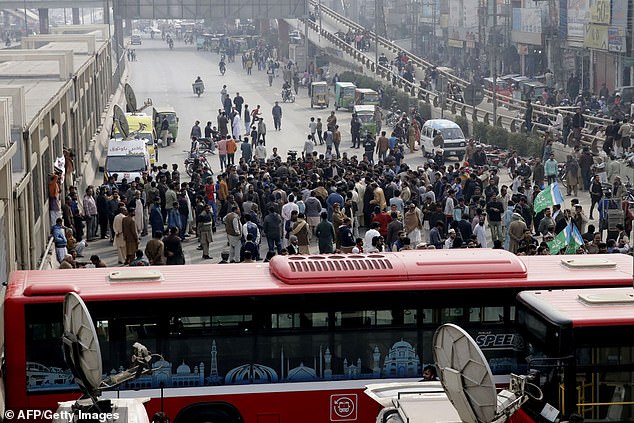 ‘People… know that a video they make from their cell phone can have far more impact than the camera of a news channel,’ said Pakistani digital rights activist Haroon Baloch.

‘Had the nearby people not filmed the Sahiwal incident, nobody would have noticed the extrajudicial killing,’ he added.

The incident is the latest instance of how phones are radically changing Pakistanis’ relationship with power.

During elections over the summer, a host of videos went viral, showing angry voters hounding elected representatives over their failure to serve their constituents. 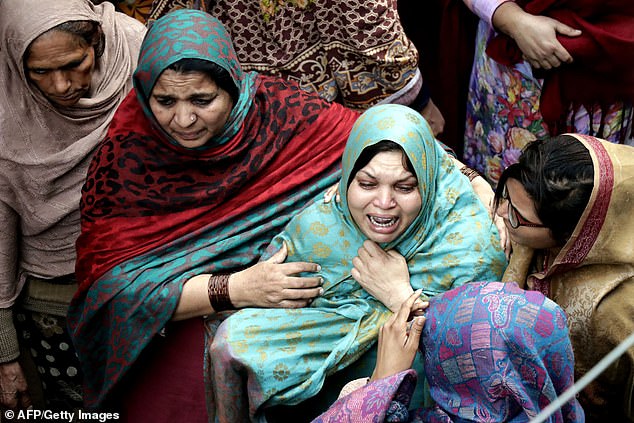 The Sahiwal incident comes almost exactly a year after a similar killing of a young social media star in Karachi ignited an ethnic rights movement by the country’s Pashtun community.

The movement it spawned – the Pakistan Protection Movement, or PTM – has been largely sustained by social media and videos captured on mobiles, piling even more pressure on authorities.

But the killings continue, with analysts saying reforms are needed to challenge impunity in the police ranks.

‘It’s a culture of the police in Pakistan to kill people and make it look it like an encounter,’ Mehdi Hasan – chairperson of the independent Human Rights Commission of Pakistan (HRCP) – told AFP.

Data compiled by HRCP showed that 4,803 people were killed in these ‘encounters’ in Pakistan within the past three years alone.

‘The police need to be properly trained if such incidents are to be avoided in the future,’ Hasan added. Mourners carry the coffin of a victim, who was part of a family who were gunned down in a police encounter in Sahiwal, during the funeral in Lahore

‘This culture has existed in the police force for decades,’ Rana explained, saying Pakistan’s mammoth backlog of legal cases overloading its judiciary was part of the problem.