Palestinian leader accuses US of undermining efforts towards two-state solution

Abbas declared that his people’s rights ‘are not up for bargaining’ in an address to the annual gathering of world leaders at the United Nations in New York on Thursday.

The 82-year-old Palestinian Authority president refused to accept the United States as the sole mediator in the Middle East conflict, a day after Trump promised a ‘very fair’ peace plan.

He used his address to the UN General Assembly to lambast the US for closing the Palestine Liberation Organization office in Washington, recognising Jerusalem as Israel’s capital, moving its embassy and slashing Palestinian aid money.

Speaking one day after the US president said he favored a two-state solution to end the Israeli-Palestinian conflict and vowed to unveil a new peace plan within months, Abbas said Trump could not be regarded as a neutral broker.

‘Jerusalem is not for sale,’ Abbas said to applause as he began his speech. ‘The Palestinian people’s rights are not up for bargaining.’

He said Palestinians would never reject negotiation, but that ‘it’s really ironic that the American administration still talks about what they call the ‘deal of the century.”

‘We will also not accept sole American mediation in the peace process,’ he said, accusing the former real estate tycoon of being ‘biased’ towards Israel since taking office in January 2017.

‘With all of these decisions, this administration has reneged on all previous US commitments, and even undermined the two-state solution,’ Abbas told the world body in a nearly 40-minute speech.

He said the Trump administration ‘has revealed its false claims of concern about the humanitarian conditions of the Palestinian people.’

He added: ‘It’s really ironic that the American administration still talks about what they call the ‘deal of the century.’

‘But what is left for this administration to give to the Palestinian people? Only humanitarian solutions? 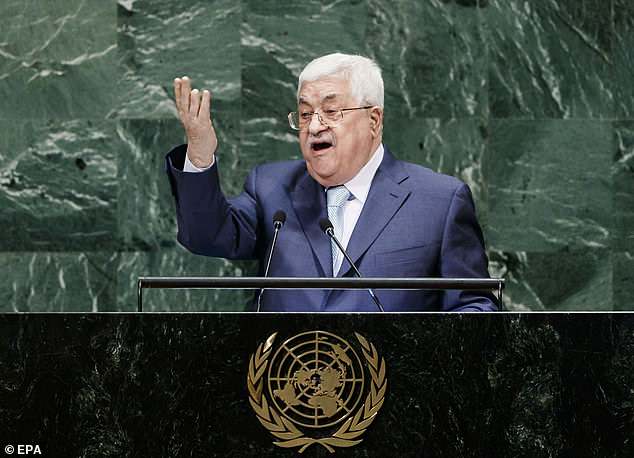 ‘We are not redundant. Why are we treated as redundant people who should be gotten rid of?

‘From this august platform, I renew my call to President Trump to rescind his decisions and decrees regarding Jerusalem, refugees and settlements … in order to salvage the prospects for peace and to achieve stability and security for future generations,’ Abbas said.

Last February, Abbas called for an international conference to re-launch the peace process under a new mediator to replace the United States, in an address to the UN Security Council.

On Thursday, he said there could be no peace without an independent Palestinian state with east Jerusalem as its capital, calling on countries around the world to recognize the state of Palestine.

‘We are not against negotiations,’ the Palestinian leader added. ‘We will continue to extend our hands for peace.

Palestinian leaders have long seen Trump’s administration as blatantly biased in favor of Israel and seeking to blackmail them into accepting their terms.

The Palestinian leadership cut off contact with the White House after Trump recognized Jerusalem as Israel’s capital last December and the US has also cut more than $500 million in Palestinian aid. 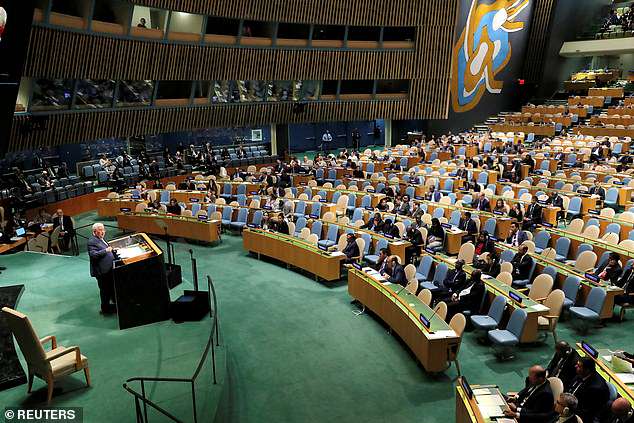 ‘Jerusalem is not for sale,’ Abbas said to applause as he began his speech on Thursday 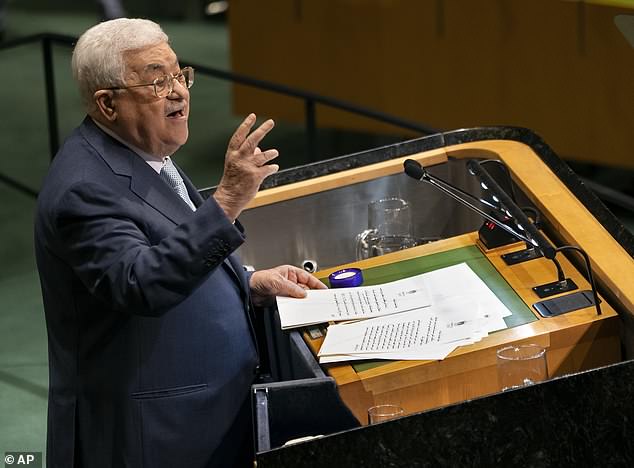 He used his address to the UN General Assembly to lambast the US for recognising Jerusalem as Israel’s capital, moving its embassy and slashing Palestinian aid money

Palestinians have said a pending US peace plan will be dead on arrival because of that and other recent US moves that Palestinians see as favouring Israel.

The last Israeli-Palestinian peace talks collapsed in 2014 and there are doubts Trump can secure what he has called the ‘ultimate deal’ since he recognised Jerusalem as Israel’s capital in December and moved the US Embassy there in May.

The Palestinians want to establish a state in the West Bank and the Gaza Strip, with East Jerusalem as its capital.

Israel captured those territories in the 1967 Middle East war and annexed East Jerusalem in a move not recognized internationally. Israel regards all of the city as its eternal and indivisible capital.

Palestinians were infuriated, and many Israelis were thrilled, by a series of decisions Trump has made within the last year, starting with his recognition of Jerusalem as Israel’s capital.

The Palestinians also claim the holy city as the capital of an eventual state.

Earlier this year, Trump followed up on the recognition by moving the US Embassy in Israel from Tel Aviv to Jerusalem, a step that was widely protested by Palestinians and others in the Arab world.

His administration has also slashed aid to the Palestinians by hundreds of millions of dollars and ended US support for the UN agency that helps Palestinian refugees.

Trump and his national security team have defended their position, saying that decades of attempts to forge Israeli-Palestinian peace have failed.

The World Bank warned Tuesday that Gaza’s economy is in ‘free fall,’ with a 6 percent contraction in the first quarter of this year and unemployment standing at over 50 percent. A report from the bank urged Israel and the international community to take action to avoid ‘immediate collapse.’

It attributed the downturn to a combination of factors, including Israel’s decade-long blockade of the Hamas-controlled territory, budget cuts by the rival Palestinian Authority and a reduction in international aid, particularly from the US. 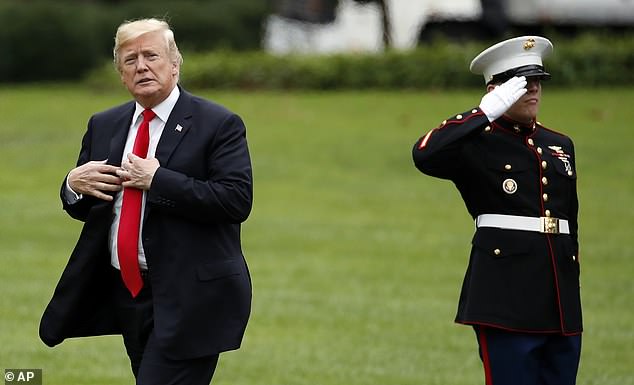 Meanwhile, Trump has equivocated on whether he supports the idea of a two-state solution, with one for the Israelis and one for the Palestinians, a plank of US policy for decades.

On Wednesday, in his administration’s clearest support for the idea, he said ‘I like a two-state solution. That’s what I think works best.’

Trump made his comment about the two-state solution while meeting with Israeli Prime Minister Benjamin Netanyahu on Wednesday.

The U.S. president told reporters he believes that two states – Israel and one for the Palestinians – ‘works best.’ He has been vague on the topic, suggesting he would support whatever the parties might agree to, a message he also recapped Wednesday.

But later in the day, he backed off, saying he would also support a one-state solution if both sides wanted it.

Netanyahu is to address the UN General Assembly later on Thursday, in a speech likely to focused on Israel’s main enemy Iran, particularly its presence in neighboring Syria.

The speeches fell on the same day that members of a vast UN developing-countries group formalised their decision to give the Palestinians the chairmanship in 2019.

Although known as the Group of 77, it promotes the interests of 135 developing nations.

The Palestinians’ upcoming chairmanship stands to boost their aspirations for official statehood but angers Israel.

Netanyahu had reluctantly accepted the concept of Palestinian statehood but has since backtracked.

A top coalition partner is threatening to topple his government if it returns to the agenda.

The two sides in one of the world’s most high-profile and volatile conflicts are always forceful voices at the UN. and its annual General Assembly, but their leaders are speaking after a particularly eventful year in their relations.

The Islamic militant group Hamas that rules Gaza has led protests for months along the border with Israel, aiming partly to draw attention to the Israeli-Egyptian blockade imposed after Hamas took control of Gaza in 2007.

At least 137 Palestinians, mostly unarmed, have been killed by Israeli fire since the border protests began on March 30. During that time, a Gaza sniper killed an Israeli soldier.

Hamas and Israel came close to serious conflict earlier this summer as violence soared along the border. Gaza militants bombarded southern Israel with mortars and rockets, and Israel struck Hamas targets in Gaza.

Israel says it is defending its border against attempts by Hamas, a militant group sworn to its destruction, to infiltrate and carry out attacks.

But Israel has faced heavy international criticism over the large number of unarmed protesters who have been killed or wounded.

Israel has also been struggling to deal with near-daily fires caused by kites and balloons rigged with incendiary devices launched by Palestinians in Gaza. The blazes have destroyed forests, burned crops and killed wildlife.

Egyptian mediated cease-fire talks have hit a deadlock, and Hamas is now intensifying its campaign with more protests.