Eve Leigh, who was born Rebecca Leigh, called the London police on Friday night after hearing British Prime Ministerial hopeful Boris Johnson fighting with his girlfriend. The New York-born playwright is now at the heart of a political scandal

The American Buddhist playwright at the heart of a British political scandal involving Prime Ministerial hopeful and Trump favorite Boris Johnson is the daughter of legendary Broadway composer Mitch Leigh who wrote The Impossible Dream and iconic TV commercial jingles.

Eve Leigh, 34, has found herself at the heart of a media storm in London along with her husband, Tom Penn, after the pair of ‘Leftists’ phoned the police while Johnson was having an argument with his girlfriend, their neighbor who lives in the apartment beneath them.

Eve, whose real name is Rebecca, is a fierce opponent of Brexit and has boasted about giving Johnson ‘the finger’ on a now-deleted Twitter account.

They have now gone into hiding and questions over Johnson’s chances at becoming the next Prime Minister are in question.

Before his state visit to the UK last month, Trump endorsed Johnson as his pick for the next British leader.

‘I think Boris would do a very good job. I think he’d be excellent. I like him very much,’ he said of him.

Born Rebecca Leigh in December 1984, the woman who has now threatened Johnson’s chances is the only daughter of Mitch Leigh, the composer best known for his 1965 musical Man of La Mancha which won five Tony awards including Best Original Score. 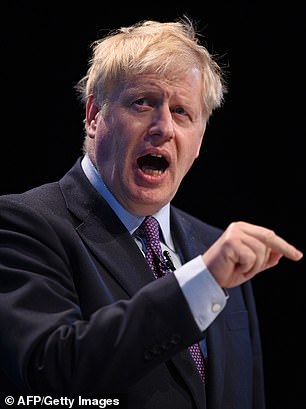 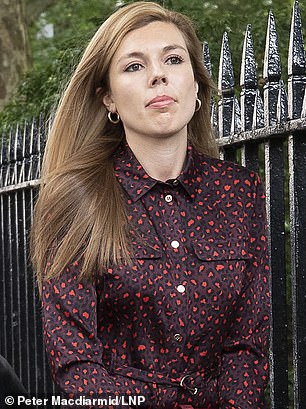 On Friday, Leigh and her husband called the police after hearing Boris Johnson, the Trump-favored Prime Ministerial candidate, arguing with his girlfriend, their downstairs neighbor Carrie Symonds (right) 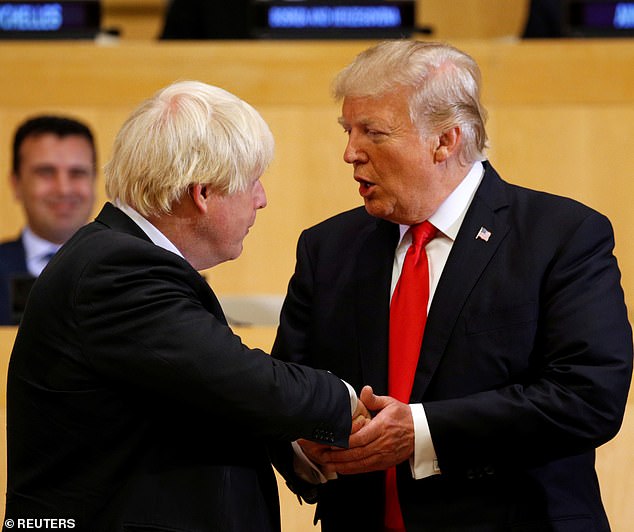 Trump has publicly endorsed Johnson. The pair are shown in September 2017, when he was the British Foreign Secretary. Earlier this year he said of Johnson: ‘I think Boris would do a very good job. I think he’d be excellent. I like him very much.’

The production starred Richard Kiley and was performed more than 2,000 times in its first year. It has since been revived multiple times.

She has a brother, David, and a half-brother, Andy, from her father’s first marriage. Her mother, Abby, is a well-known artist whose work hangs in The Metropolitan Museum of Art and the Guggenheim in Manhattan. 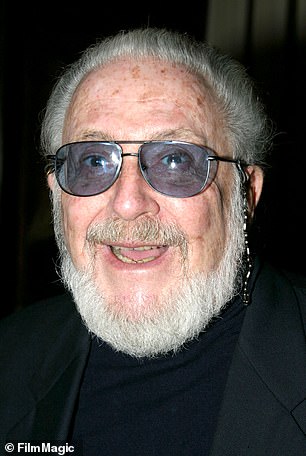 The family lived a somewhat private life in Manhattan with the exception of Eve’s artist mother Rebecca who, in recent years has been photographed socially.

In addition to his Broadway success, Leigh made a fortune composing jingles before his 2014 death.

Among them was Nobody Doesn’t Like Sara Lee for the food giant, Sara Lee and The Dis-advantages of You for the cigarette-maker Benson & Hedges.

Eve makes no tangible mention of her wealthy American family in interviews with British theater publications, only that she knew from a young age she could work in ‘the arts.’

In one, from February this year, she described how she was once a palm reader, her husband is a magician and her first job was as a babysitter.

But her family enjoys enormous wealth.

In 2015, a year after her husband’s death, Abby listed their Upper East Side townhouse for $38million and bought an $8million home in the former New York Cancer Hospital.

She ended up reducing the price of the 12,000 sq ft, five-floor, elevator-equipped home to $24million and accepted $20.4 million for it in 2016 from Automation Townhouse LLC.

Months after Mitch’s death, she purchased a $4.8million home on the Upper West Side which she sold in 2018 for the same price. 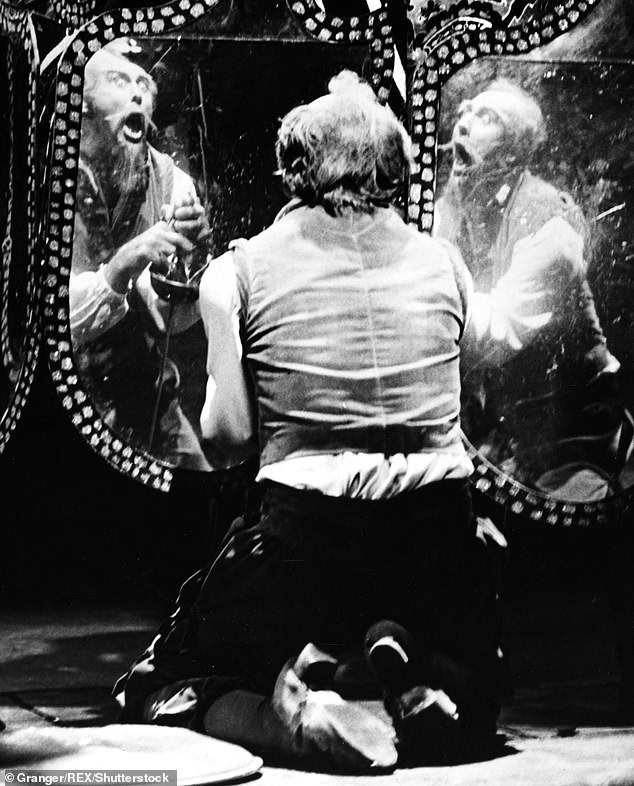 Richard Kiley as Don Quixote in The Man of La Mancha in 1965. Leigh’s music for the show won him a Tony, particularly the song ‘The Impossible Dream’ 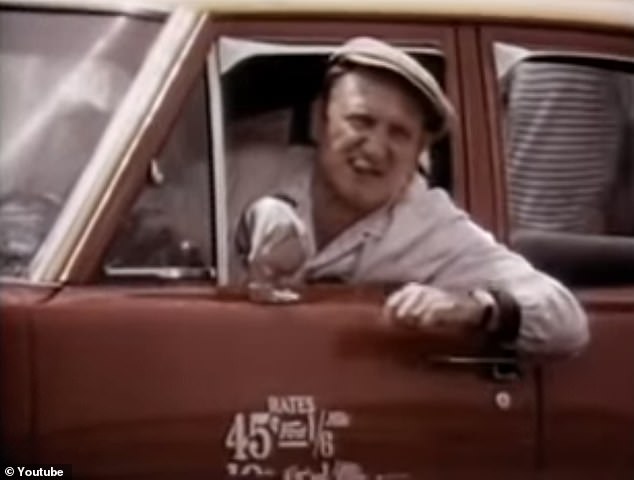 It is unclear what Eve’s brothers do for work or why she decided to leave the US for England as a student. 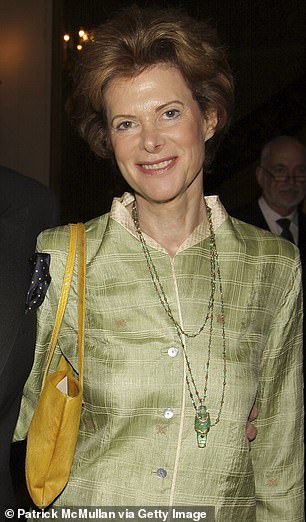 On Friday night, Leigh and her husband listened through the walls while Johnson, 55,  and his girlfriend Carrie Symonds, 31, argued.

They called the police claiming they were ‘frightened and concerned’ by the noises coming from inside the South London apartment and they also recorded what they heard from a landing outside Symonds’ front door.

Penn has insisted they are not politically motivated and were merely concerned for everyone’s safety.

This summer, she said ‘all Tories suck,’ a reference to the British Conservative party which he is a part of, and also accused Last week Ms Leigh wrote on Twitter that Tories were ‘pretending to respect the memories of the Holocaust dead’.

She also previously claimed outgoing Prime Minister Theresa May had brought in ‘insanely cruel policies’, that Brexit was ‘racist’ and the Home Office was ‘lower than vermin’

In November 2017, she commented on the Tory leadership contest, which Mr Johnson is the favorite to win next month. 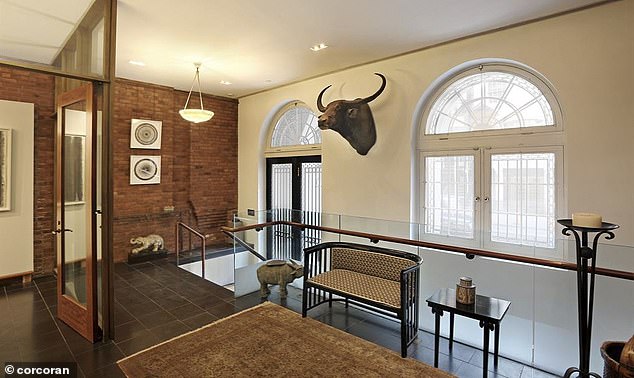 Eve grew up in this Upper East Side townhouse which her mother listed for $38million in 2015. She took a $24million price cut the following year and sold it 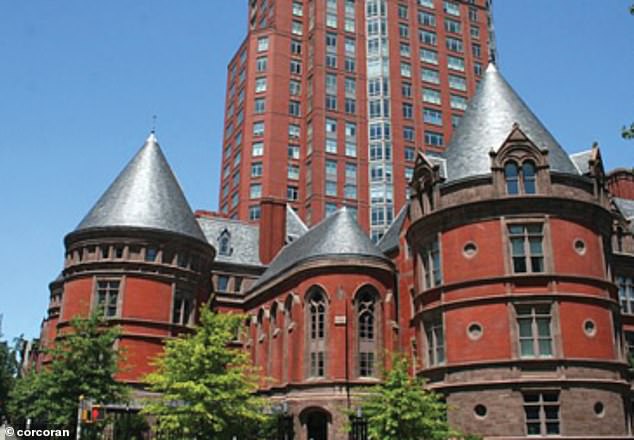 Anti-Conservative tweets on her Twitter account, which had been active for seven years before being taken down in the last couple of days, dated back to the Occupy London protests in 2012 when Johnson was the Mayor of London.

That year she also co-wrote a production about the Occupy London protests that camped out at St Paul’s Cathedral.

Earlier this year, one of her plays appeared in the Brexit Stage Left festival in London, a celebration of European theater sponsored by a network of dramatists that is part-funded by the European Union. 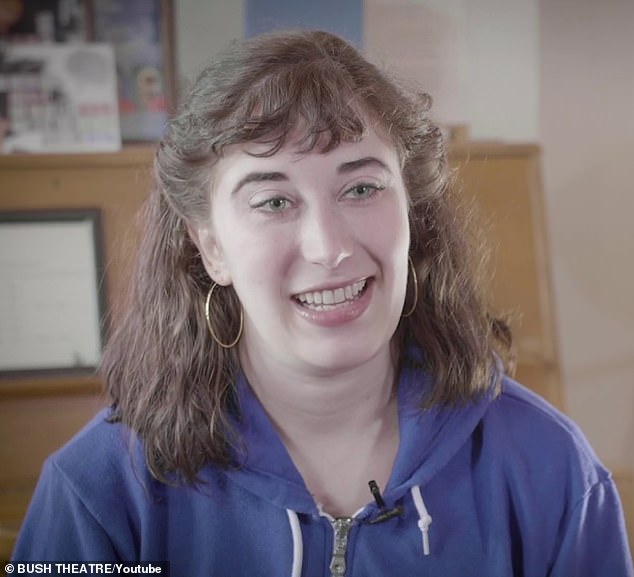 Leigh moved to the UK as a student when she was 18 and studied at Cambridge. Now, she is a playwright 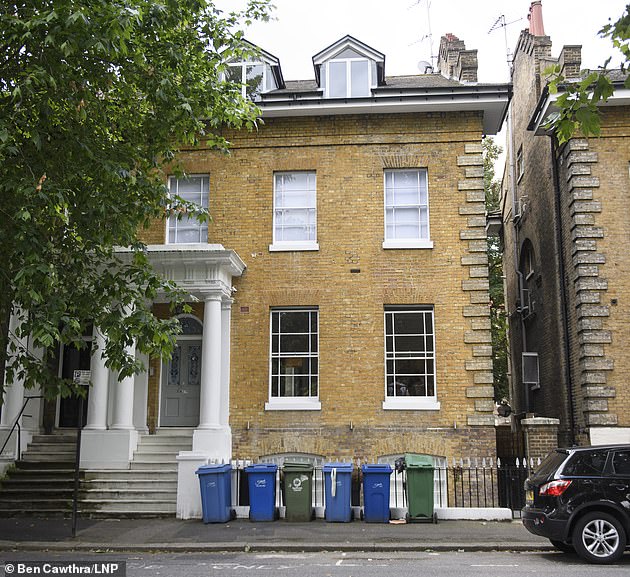 Leigh bought her apartment in this South London property for around $900,000. Symonds lives beneath her on the first floor 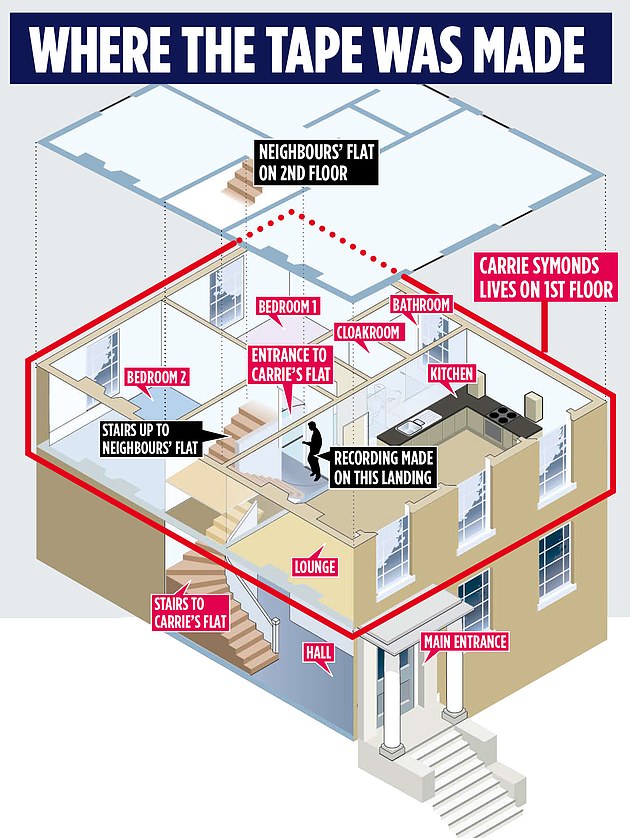 Eurodram’s website reveals it is ‘co-funded by the Creative European Programme of the European Union’, which is a a £1 billion EU cultural project.

Brexit Stage Left was also funded by The Arts Council England, The British Academy and the Royal Central School of Speech and Drama.

In an interview with The Stage magazine, Leigh, who went to Jesus College at Cambridge University on a scholarship where she studied history, also complained of funding cuts to the arts

What Tom Penn said in his statement on Saturday night:

‘In the early hours of Friday morning, I answered a phone call from a takeaway food delivery driver. At the same time, I heard what sounded like shouting coming from the street.

‘I went downstairs, on the phone to the driver, and collected my food. On the way back into my flat, it became clear that the shouting was coming from a neighbour’s flat. It was loud enough and angry enough that I felt frightened and concerned for the welfare of those involved, so I went inside my own home, closed the door, and pressed record on the voice memos app on my phone.

‘The police arrived within five minutes. Our call was made anonymously, and no names were given to the police. They subsequently called back to thank us for reporting, and to let us know that nobody was harmed.

‘To be clear, the recordings were of the noise within my own home. My sole concern up until this point was the welfare and safety of our neighbours. I hope that anybody would have done the same thing.

‘Once clear that no one was harmed, I contacted the Guardian, as I felt it was of important public interest. I believe it is reasonable for someone who is likely to become our next prime minister to be held accountable for all of their words, actions and behaviours.

‘I, along with a lot of my neighbours all across London, voted to remain within the EU. That is the extent of my involvement in politics.

‘The unpleasant things being said about myself and my partner, and some quite frankly bizarre and fictitious allegations, have been upsetting for not only us, but also for family, friends and fellow Camberwell neighbours, who are currently being harangued by the media. I would ask that you leave private citizens alone and focus instead on those who have chosen to run for power within the public eye.

‘The attempts from some areas of the press to instead focus their stories on us, and in particular my wife, have been eye-opening, and very alarming. I would encourage anyone to record any instances where they feel concerned for another person’s safety.’

She told the publication: ‘It does lead to conservatism. It’s much easier to programme someone with a track record.

‘A lot of people are very frustrated. There aren’t many opportunities and you have to stick around.’

Recently she created an ‘interactive installation’ called Climate Games at the Laboratory of the Insurrectionary Imagination festival in Paris.

Penn, who was born in Cambridgeshire, is a trained percussionist and singer who has performed throughout Europe.

He is a member of the Little Bulb Theatre in Surrey and tours in the southeast of England. The 30-year-old is also a playwright and has written six plays, according to an online biography which states he has performed at the Royal Albert Hall and St Paul’s Cathedral.

Leigh, who married her partner Tom in March this year, has previously written plays that featured the refugees crisis, ‘subversive storytelling’ among Soviet dissidents and child abuse as subject matter.

She has written plays about Buddhist practices and about coming from a Jewish background.

Her religious outlook influenced the theme of her most recent play, The Trick, which covered ageing and coping with grief.

She also described the Buddhist religion as her ‘biggest influence’ and said she has ‘been chanting for 10 years’.

Her first professional play, Silent Planet, was about a writer who was held in a Soviet mental institution.

The work received positive reviews but her most recent play, The Trick, was described by The Guardian  as ’emotionally manipulative’ and ‘eye-rollingly cringeworthy’.

Ms Leigh bought her London apartment, which was formerly occupied by council tenants, above Carrie Symonds’ apartment for £720,000 ($900,000) in April last year.

According to The Guardian, Mr Johnson was heard refusing to leave the apartment in a recording made by Penn.

Symonds was complaining about him spilling red wine on her couch, it  was reported.

In the recording, which was passed to the newspaper after police attended the scene, Johnson can be heard shouting ‘get off my f***ing laptop’ before a loud crashing noise was heard.

Symonds was also said to be heard telling Johnson: ‘Get off me’ and ‘get out of my flat’.

She then told him: ‘You just don’t care for anything because you are spoilt. You have no care for money or anything.’

Johnson refused to answer questions about it at an event over the weekend.