Pampering men outed by their partners across the UK

A wise man once said that the true test of a man’s character is what he does when no one is watching.

But for these unfortunate men, their very embarrassing moments were caught on camera – then Tweeted for all to see.

From dog-owners getting overly-familiar with their pets to boyfriends getting acquainted with their feminine side, these photos capture the ingenious to the downright bizarre.

With their oddities exposed to the Twittersphere by their nearest and dearest, these 12 men might think twice before indulging their innermost desires again.

This husband was snapped swishing his hair backwards as if he were the star of a shampoo advert. His wife – a well-placed spectator to the enchanting display – wasted no time in capturing the moment a swirl of water passed over his head in a miraculous arch while he was ‘pretending to be a merman’ 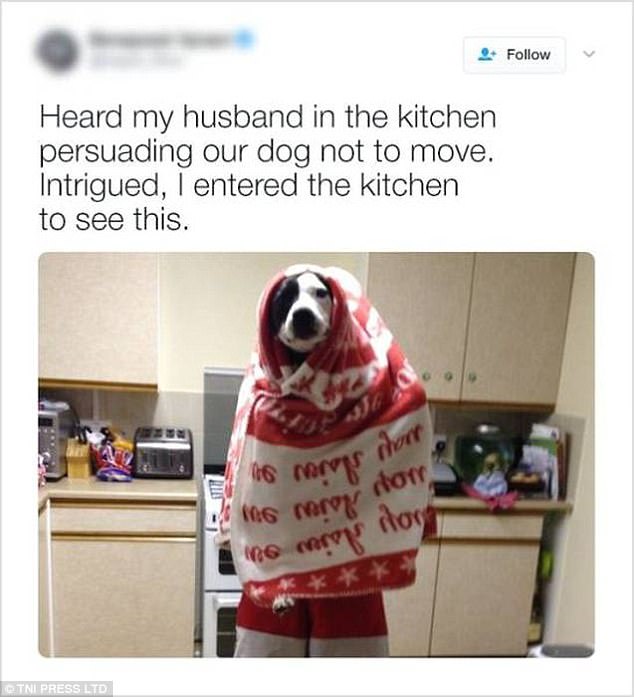 They say dogs are a man’s best friend, but this owner decided to take things to the next level. By skillfully positioning the pooch on his shoulders then wrapping a blanket around them, he made it look as if his canine pal had a human body. Unfortunately, the fun was interrupted by his wife who heard him trying to get his dog to keep still during the painstaking mission 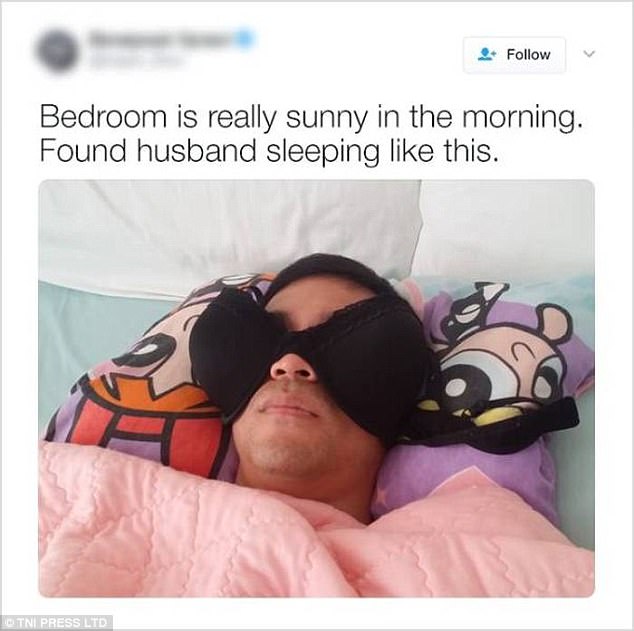 This husband was so fed up of sunlight disturbing his peaceful slumber he took matters into his own hands, employing his wife’s lacy black bra as an eye mask. While very effective at keeping the rays away, it also meant he failed to realise his other half had captured his bizarre invention on camera 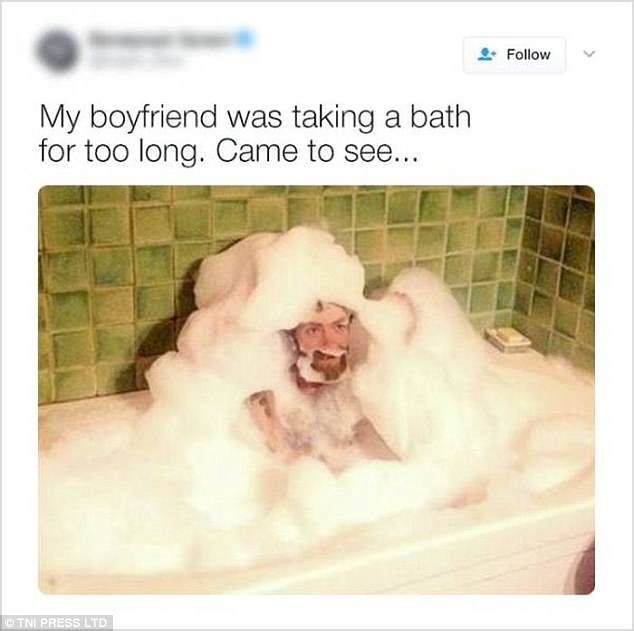 In one episode of the sitcom Friends, Monica introduces Chandler to baths – and he ends up becoming somewhat of a bath hog. The same could be said of this boyfriend who was caught by his other half sploshing around in the tub with so many bubbles he was barely visible. Perhaps he’ll lock the door next time he fancies a dip! 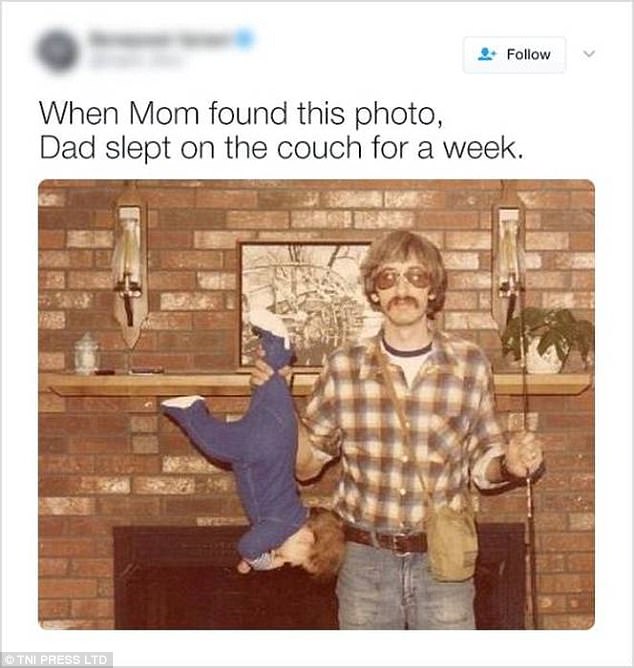 Put me down! This dad – sporting a swanky horseshoe moustache and aviator sunglasses – was snapped dangling his child upside down by one leg in a rather uncomfortable pose. Seemingly untroubled by being the wrong way up – and perhaps even enjoying the game – the toddler continues to suck his thumb. But after being outed by one of his children who took the snap, the unfortunate dad ended up being kicked out of his partner’s bed for a week 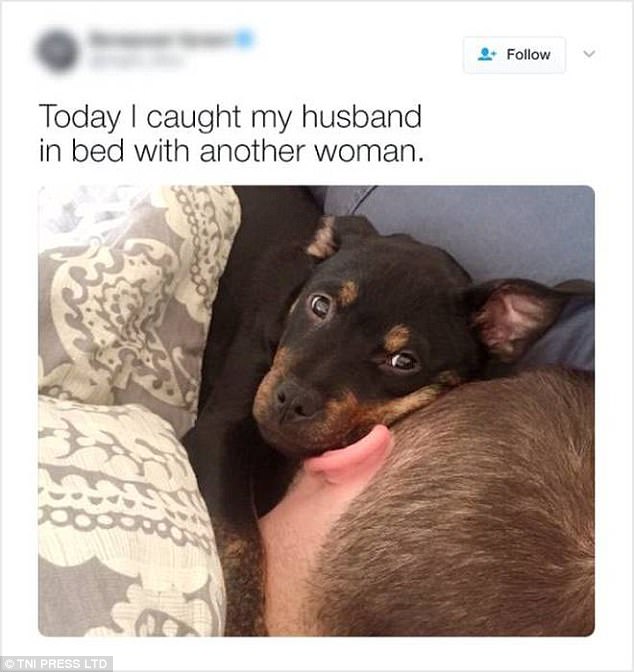 Unconditional love: This dog-owner was photographed blissfully snuggled up with his pooch who placed a paw affectionately on his master’s face. The man’s unsuspecting wife walked in to find the pair locked in a loving embrace in their bed and was so bemused by the scene she decided to out her ‘cheating’ hubby on Twitter 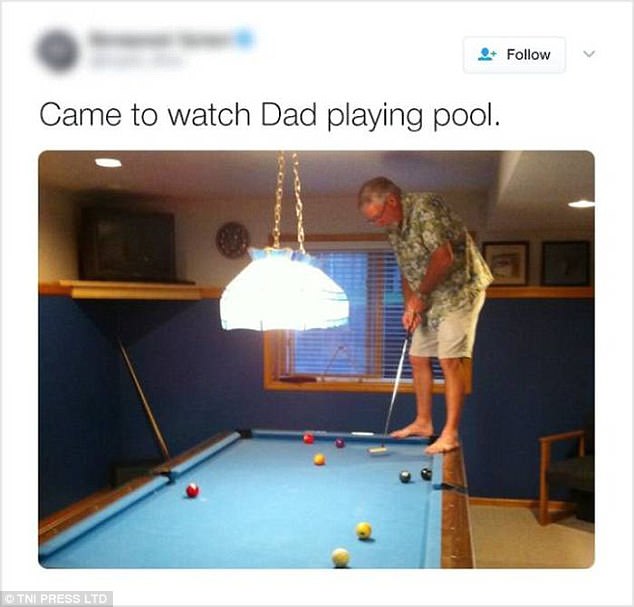 You can take the man off the golf course… This athletic dad was caught on camera skillfully balancing on the edge of a pool table while using a golf put to pot the balls. Seemingly unbothered by the rules of the game, he decided to put his own stamp on the classic pub pastime. But he was spotted in the barefoot pose by one of his children who decided this was something the world had to see 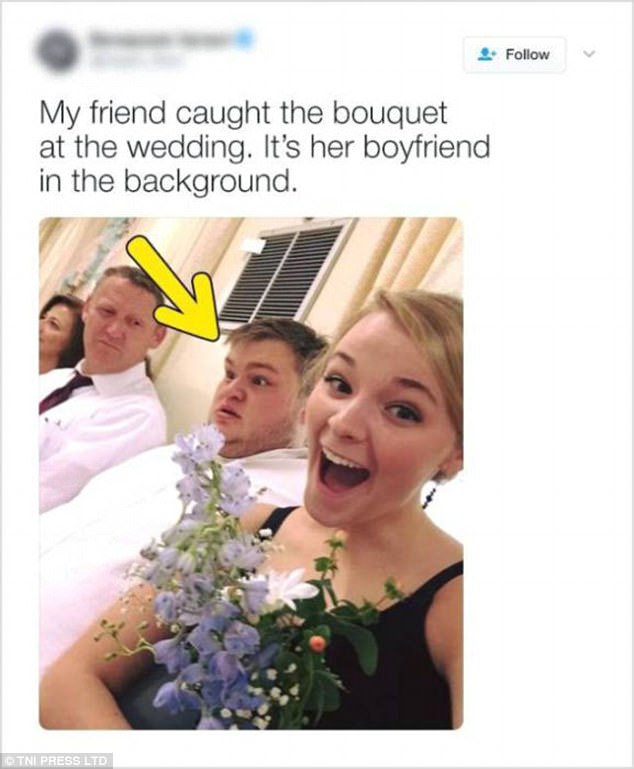 The look of love? This boyfriend didn’t look overly happy when his other half caught the bouquet while they were at a wedding together. The incriminating snap shows him pull a bewildered expression as his overjoyed girlfriend smiles with glee – seemingly oblivious to his horrified reaction 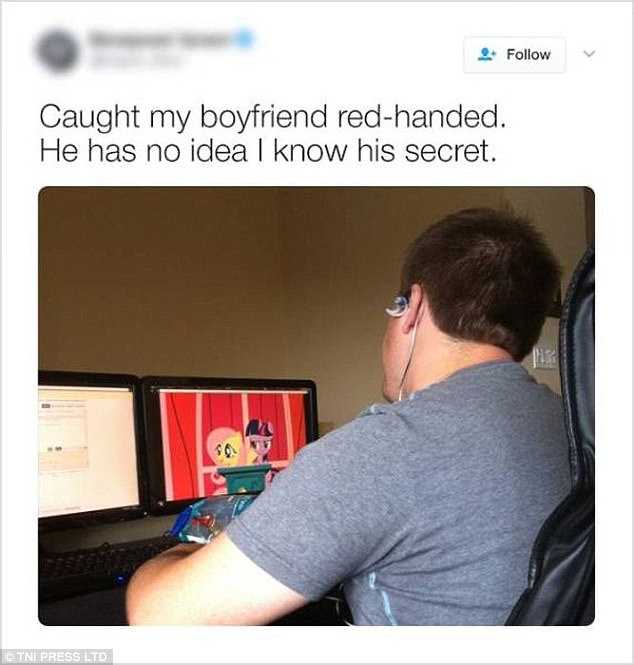 This boyfriend thought he would switch on some cartoons to relax. But his sly girlfriend managed to catch him watching what appears to be The Powerpuff girls in a surreptitious snap over his shoulder. Meanwhile, he is blissfully unaware he has just been outed as a fan 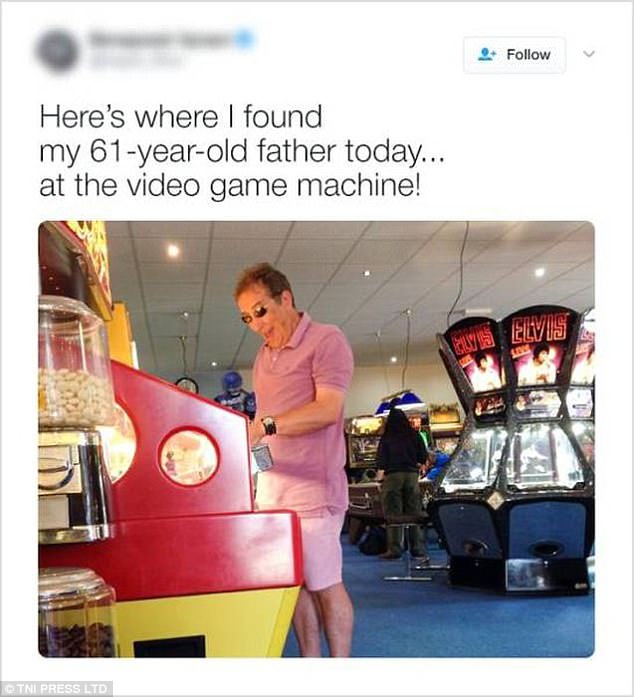 Once a gamer, always a gamer: This 61-year-old dad couldn’t be happier playing on video game machines in an amusement park. His sneaky child, who was potentially having less fun than their dad, managed to snap him pulling an ecstatic expression during the fun day out 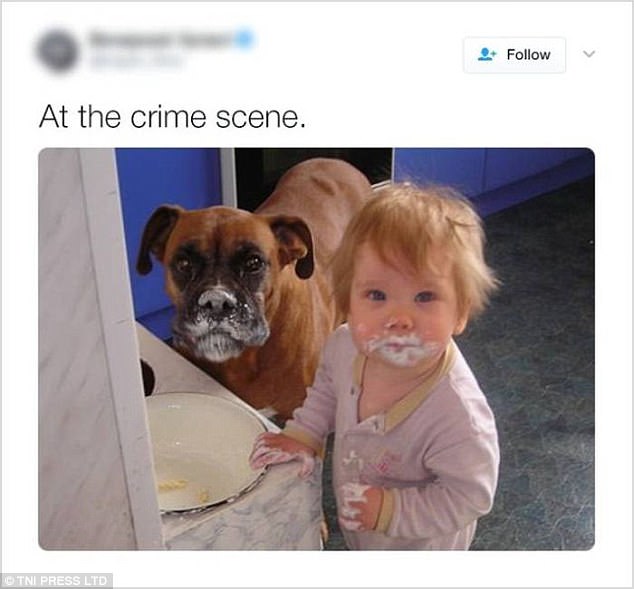 It wasn’t us! This toddler decided to smother their face in what appears to be shaving foam and – not wanting the family dog to feel left out – decided to rope in her canine pal. As they are caught red-handed, the pair simultaneously look up from the gungy mess in the sink just in time to pull their most innocent expressions 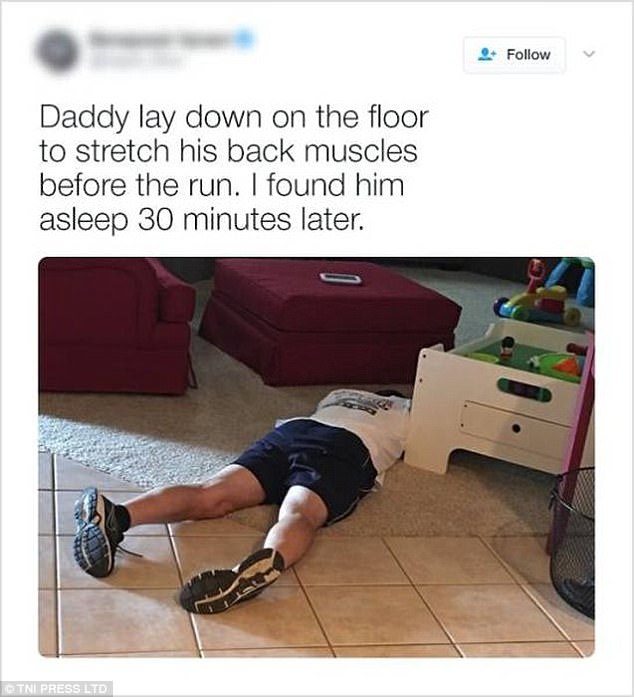 This exhausted dad thought he would take the weight off his feet and have a relaxing post-run stretch. But he ended up falling asleep face-down in the living room. Unfortunately, he was spotted by one of his children who decided to capture the hilarious sleeping pose