A homophobic handout claiming gay marriage will allow schools to pressure students into undergoing sex-changes has been dropped in a Sydney mailbox.

The printed piece of paper, which called homosexual organizations as ‘cutting off genitals terrorists’, was discovered at a residence on Tuesday morning, according to 9News. 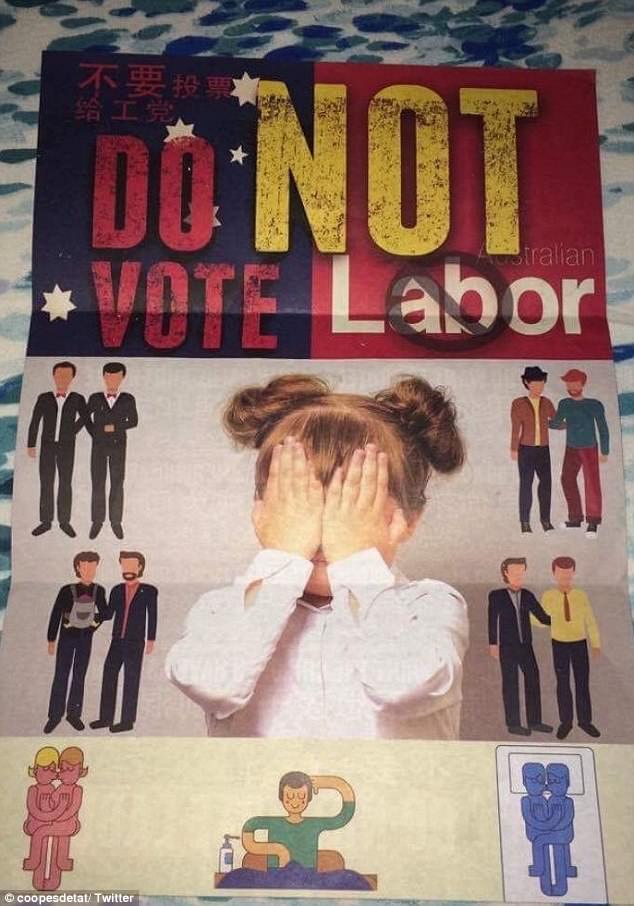 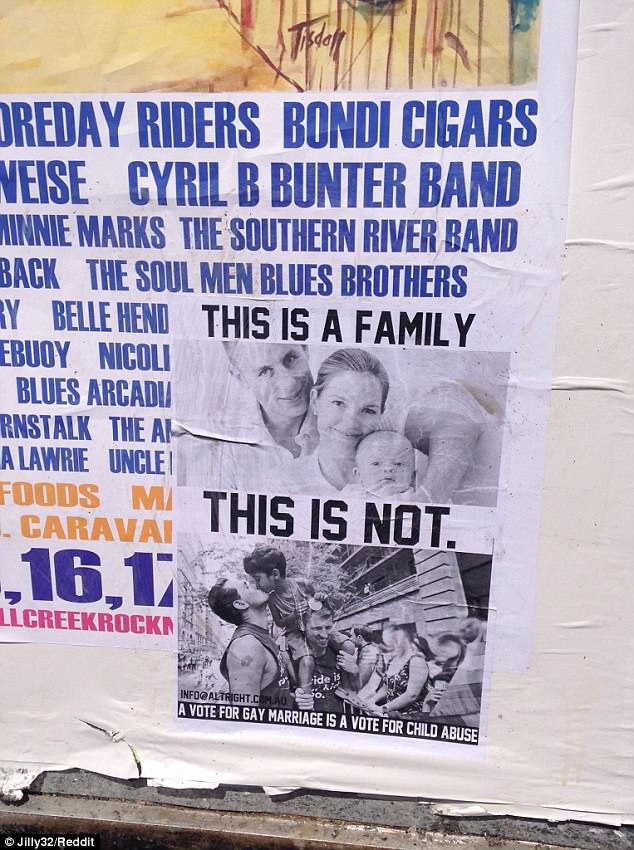 ‘The legitimization of same-sex marriage campaign is from a global organization. The true intention of the homosexual organization is not simply for a marriage certificate, but it intending to be protected by law to permeate into schools, to pursue their wild ambitions, to transform teenager’s gene and cut off human’s generation, to transform our next generation to sex-changed race like them, to replace the traditional one man and one woman marriage with two men or two women abnormal same-sex marriage!’

The note accused the Safe Schools Coalition Australia of encouraging students to undergo sex changes to ‘enjoy the homosexual life.’

It also claims that children will begin receiving ‘homosexual lessons since kindergartens.’

The homophobic note is the most recent in a series that have emerged across the country in the lead up to a postal vote on gay marriage.

Another pamphlet urging people not to vote for Labor was circulated in Sydney’s western suburbs last week.

The flyer, which depicts a young girl shielding her eyes from gay couples pictured around her, have been distributed in the Georges River, Bayside, Canterbury-Bankstown and Strathfield, according to The Sydney Morning Herald.

‘Do not vote Labour’ is scrawled above the homophobic illustrations, which also includes a man who appears to be performing a sex act and gay couples in compromising positions. 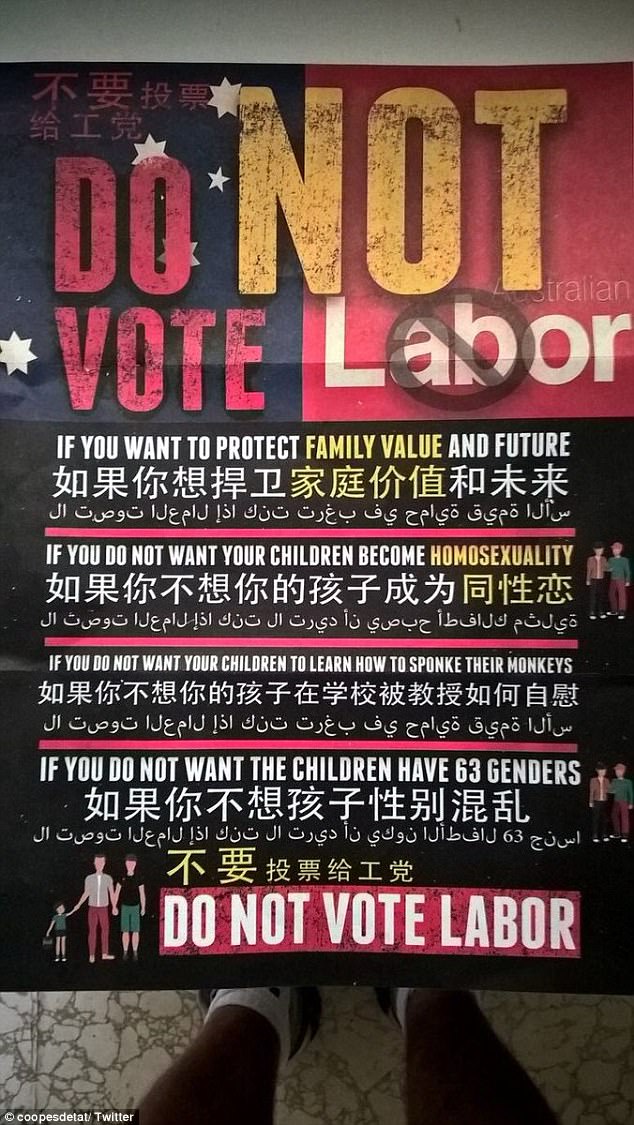 ‘Do not vote Labour’ is scrawled above the homophobic illustrations, which also includes a man who appears to be performing a sex act and gay couples in compromising positions (pictured)

On the back of the pamphlet are a series of statements slamming Labor.

The flyer does not make it clear who created and distributed them.

It has been reported to the NSW Electoral Commission.

‘We have had reports of this false and highly offensive flyer being circulated in parts of western and south western Sydney. As local government elections are underway in NSW, and the flyer is unauthorised, we have made a complaint today to the NSW Electoral Commission,’ NSW Labor general secretary Kaila Murnain told SMH. 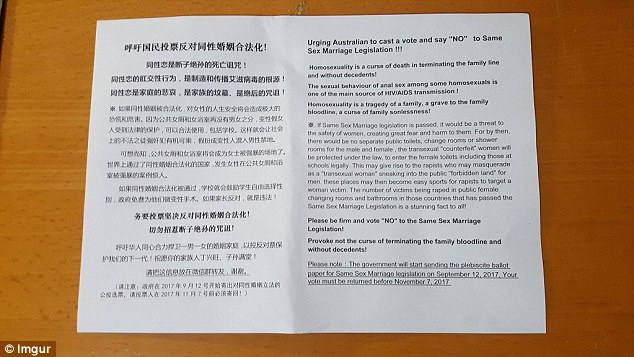 Another poster was allegedly spotted in Brisbane’s West End on August 28 and was shared online by Reddit user jilly32.

‘In West End. This is the vile hate the plebiscite is unleashing’, the post read.

The plastered sign features a man and woman with a baby, while below was a man with a young boy on his shoulders, with another man leaning in to kiss the child.

The top image was captioned ‘this is a family’ while the bottom photo ‘this is not’. 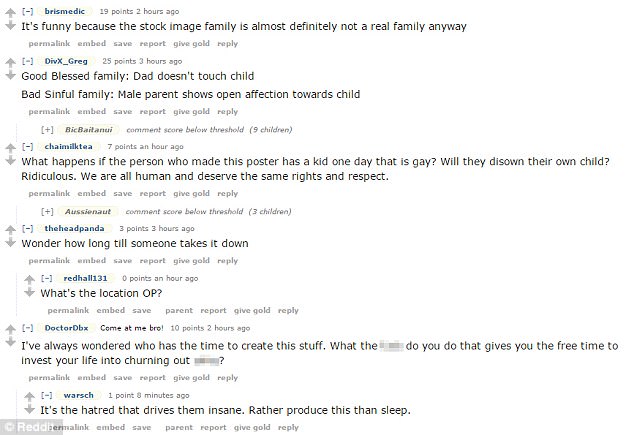 At the bottom of the poster, it reads: ‘ A vote for gay marriage is a vote for child abuse’.

The post was quickly awash with comments lambasting the creator of the poster and the decision to put it up.

‘Its the hatred that drives them insane. Rather produce this than sleep’, one user wrote.

Another wondered what would happen if the creator were to have a gay child in the future.

‘What happens if the person who made this poster has a kid one day that is gay? Will they disown their own child? Ridiculous. We are all human and deserve the same rights and respect’, they wrote.

One user pointed out the irony of which picture was more likely to be a ‘real’ family.

‘Its funny because the stock image family is almost definitely not a real family anyway’, they joked.

It follows another hateful image allegedly spotted in Heffernan Lane in the heart of Melbourne’s central business district on August 19. 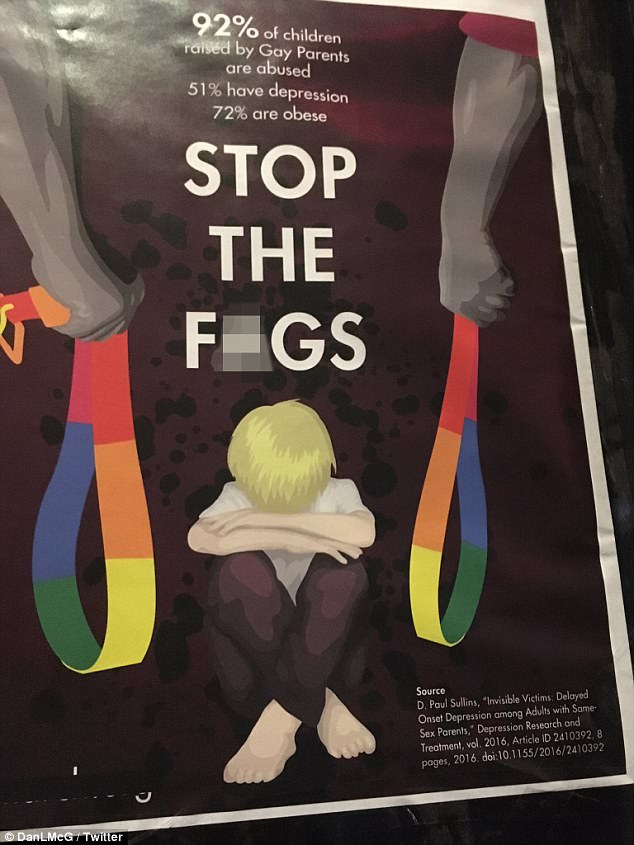 A photo of the poster provoked an outraged response on social media, even attracting the ire of opposition leader Bill Shorten.

The poster, titled ‘Stop the F*gs’, claims 92 per cent of children raised by gay parents suffer from abuse.

The poster referenced a discredited 2016 study by Reverend Paul Sullins from the Catholic University of America.

Gay rights activist Rodney Croome said the Australian Institute for Family Studies found children raised by same-sex couples had the same outcomes as other children, contradicting claims made in the poster. 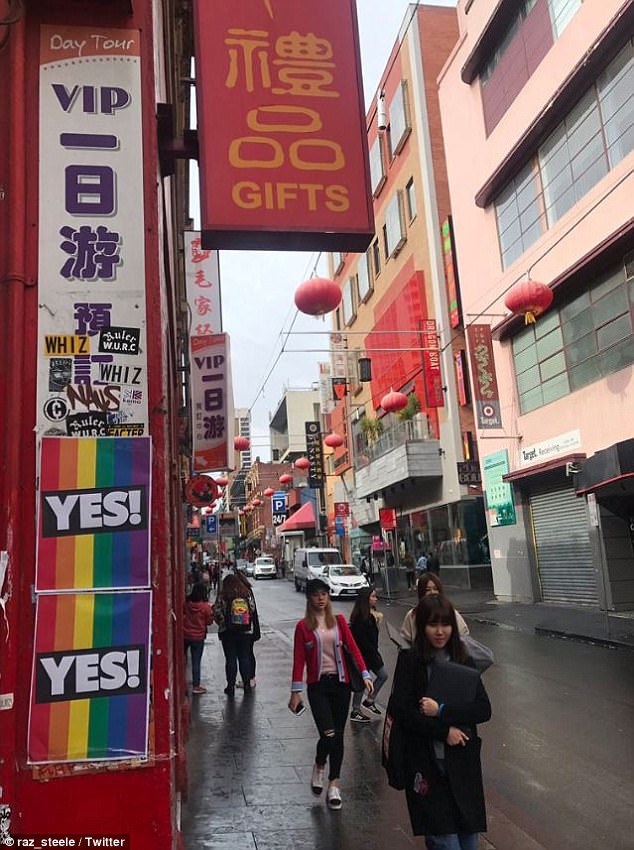 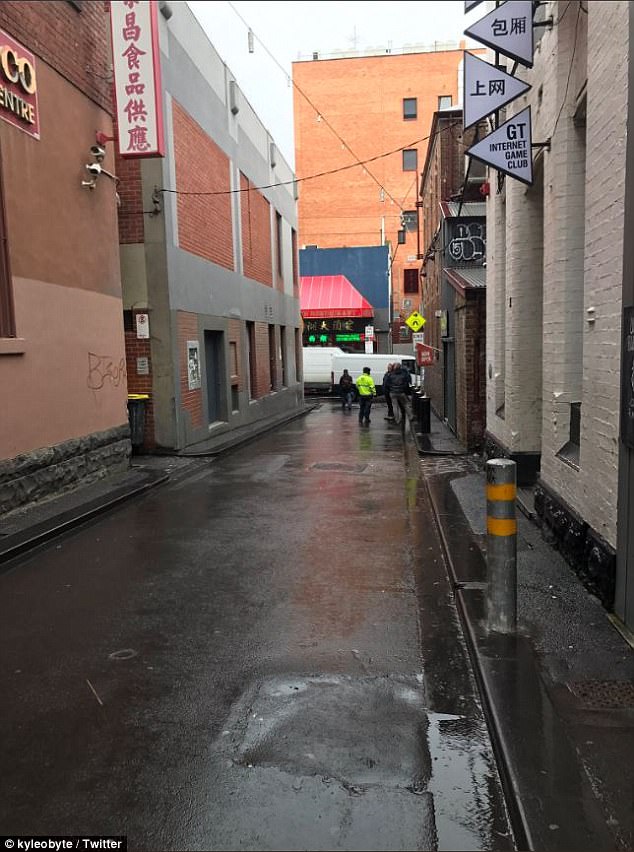 ‘Overall, research evidence indicates that children raised in same-sex parented families do as well emotionally, socially and educationally as other children,’ he said.

Some Twitter users were quick to take action, with one person arriving at the scene to take it down only to find a clean up already in progress.

Mr Shorten retweeted an article about the offending poster, apologising to those who might have been hurt by it.

‘Labor opposed this postal survey because we feared exactly this kind of hurtful filth would emerge,’ Mr Shorten wrote. 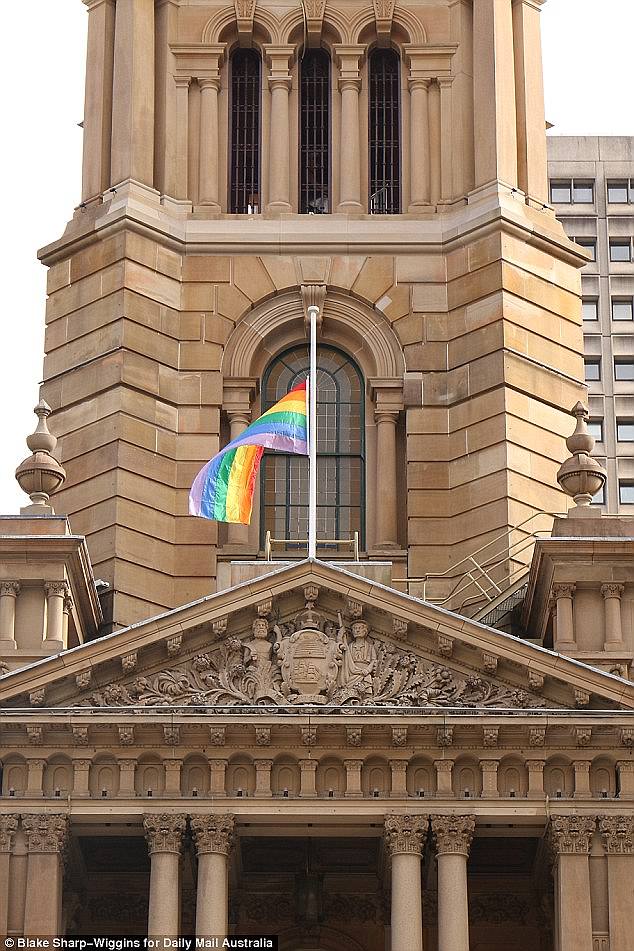 The posters appeared just days after Sydney was hit by similar anti-gay marriage leaflets, posted in letterboxes in the southern Sydney suburb of Hurstville (pictured is the rainbow flag flying over Sydney’s Town Hall.

‘This kind of garbage isn’t ‘debate’, it’s abuse. I’m so sorry that LGBTI Australians have to put up with it. Let’s make sure there’s an overwhelming ‘Yes’ vote in response.’

‘If we have officially sanctioned de-gendering marriage, it’s very hard not to see de-gendering come in in so many other areas as well,’ he said.

‘It isn’t just about marriage. Sure, marriage is the immediate focus, but there are lots and lots of implications here, and we’ve got to think them through before we take this big leap into what I think is the dark.’

Bill Shorten (pictured) tweeted about the offending poster, apologising to those who might have been hurt by it 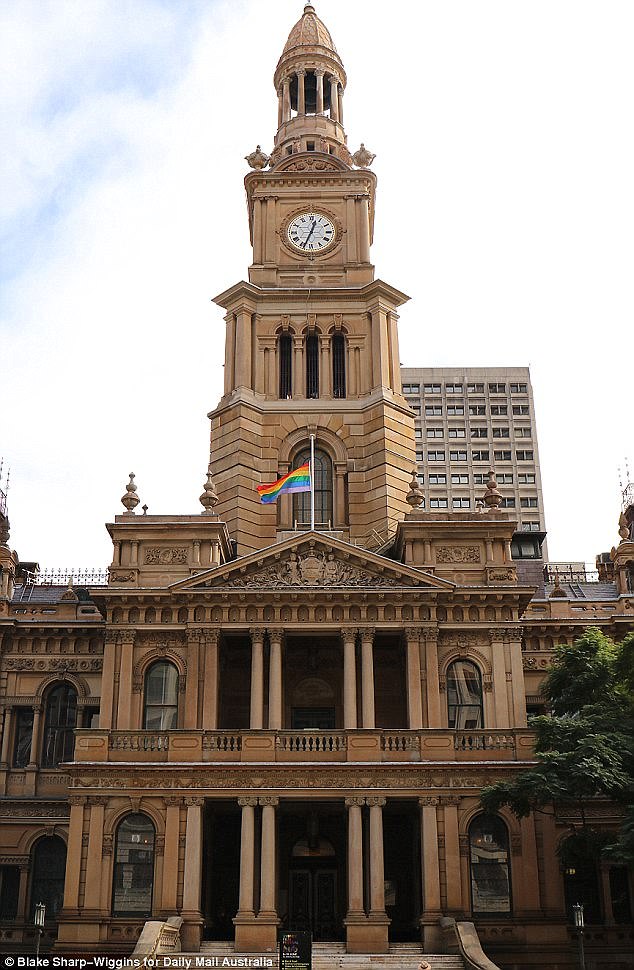 Australia is preparing for a postal plebiscite on gay marriage, and voters have until August 24 to update their details or enrol (pictured is the rainbow flag flying over Sydney’s Town Hall)